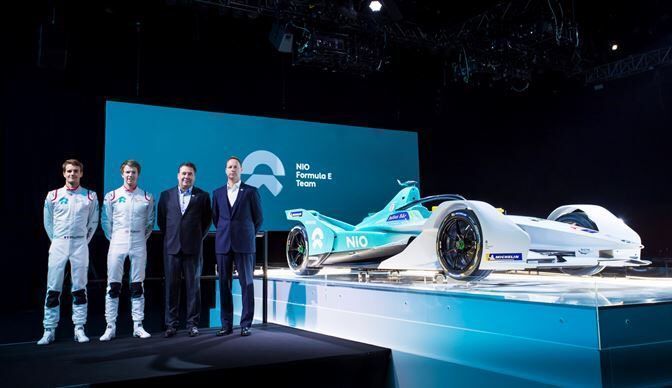 The Chinese-owned British team became the latest to reveal its brand new NIO 004 Gen2 car for Season 5 due to start in December at a launch event in the UK with the livery changing to a sky blue and white combination.

The team also confirmed its driver line-up as Turvey was retained for his fourth full season and will be joined by Frenchman Dillmann, who has been part of the all-electric series for the last two seasons but only for handful of races with Venturi.

In the 10 outings, Dillmann has impressed by scoring in five races with a best of fourth in last year’s season finale round. The 2016 Formula V8 3.5 winner replaces Luca Filippi, who was announced to be leaving the team last week.

“I am delighted to be continuing to race for the NIO Formula E team, I would like to thank Gerry and everyone at NIO for their continued support,” said Turvey. “Over the past three seasons we have grown together as a team, improving each season, and I was proud to be able to take our first podium together in Mexico City last season.”

Dillmann said: “I am delighted to be joining NIO. We have had some good test days, developing our new car and building our relationship. I particularly enjoy the competitive and professional atmosphere within the team and I can’t wait to start this new and exciting era in Formula E with NIO.”

Team principal Gerry Hughes added: “After an extremely busy period of Manufacturer testing over the summer months, it is, of course, fabulous to be able to officially launch the NIO 004 car, the race livery and our revised driver line-up for Season 5 at London’s Copper Box this evening.

“With a revised driver line-up for Season 5 [it] demonstrates that we have been extremely busy in the off-season and I am very happy to welcome Tom onboard to the NIO team for the start of this new era of open-wheeled electric street racing.”