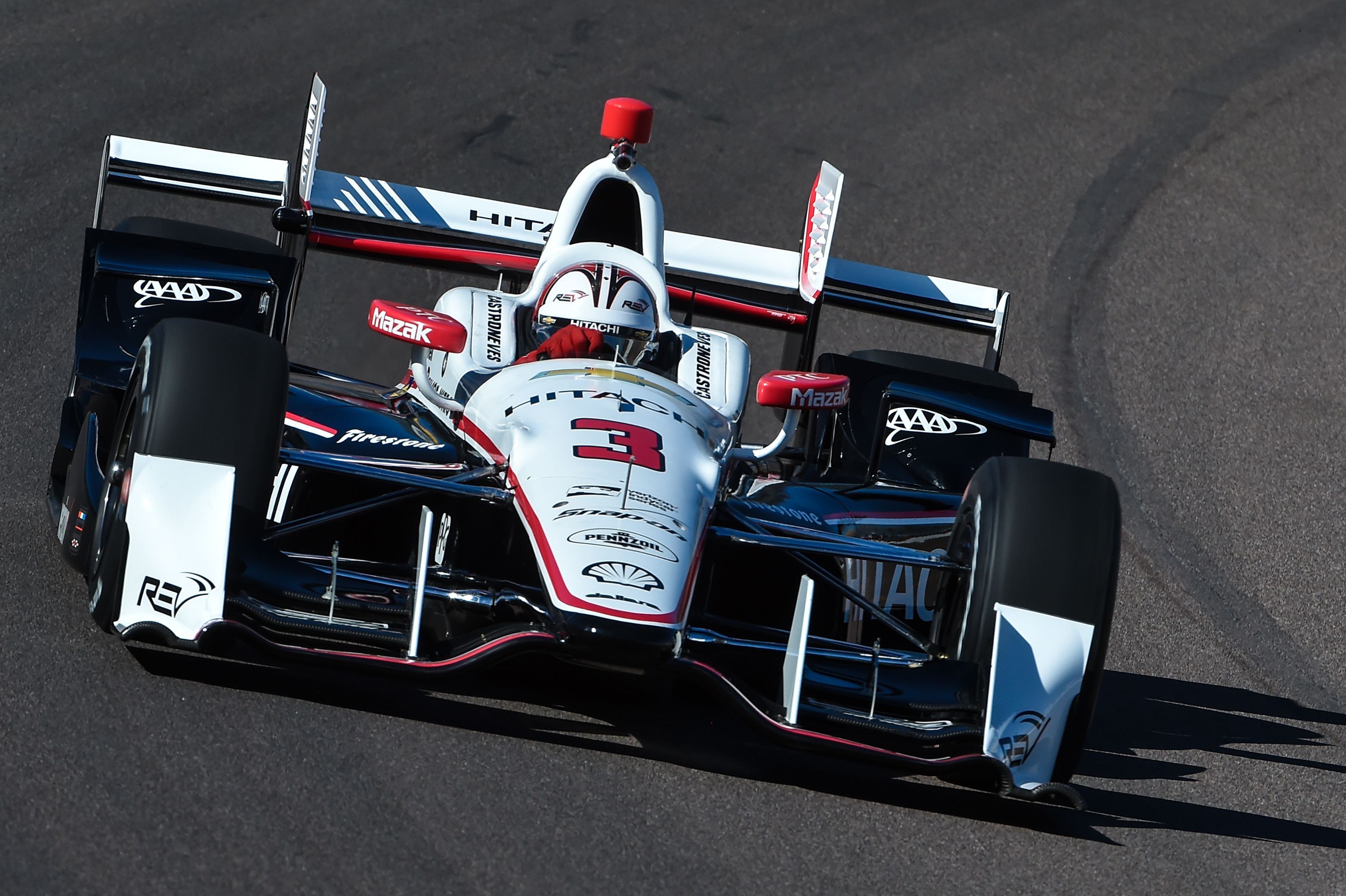 Helio Castroneves led four Team Penske drivers in the top six after the first session of the Phoenix International Raceway promoter test Feb. 26, with a lap time that unofficially eclipsed the track record on the 1.022-mile short oval.

Indycar great Arie Luyendyk, a two-time Indianapolis 500 winner just named one of three officiating stewards for the 2016 Verizon IndyCar Series season, holds the official one-lap record of 19.608 seconds (183.599 mph) set in 1996 when the track was measured at an even mile.

Andretti Autosport’s Marco Andretti led the evening practice session with a lap of 19.6038 seconds (187.678 mph) under the lights in the No. 27 Snapple Honda that was third on the combined speed chart behind the afternoon times of Castroneves and Power. Reigning series champion Scott Dixon was second fast in the night session (19.6066 seconds, 187.651 mph) in the No. 9 Target Chip Ganassi Racing Chevrolet.

“We were able to run in both temperature (conditions), which was OK,” Castroneves said. “Obviously, earlier today in the day conditions, we were focusing on speed and the Hitachi car was really dialed in. This evening, we were able to work more on the race pace, and everything seems to be going in the right direction. We’re looking strong and looking good, but we’re still learning about this updated Chevy aero kit. Looking forward to tomorrow and learning even more.”

Twenty-one cars are participating in the promoter test that has two more sessions scheduled Feb. 27. The Verizon IndyCar Series returns to PIR following an 11-year absence for the Phoenix Grand Prix on April 1-2. It is the second of 16 races on the 2016 schedule that opens March 11-13 with the Firestone Grand Prix of St. Petersburg and includes the 100th Running of the Indianapolis 500 presented by PennGrade Motor Oil.

In addition to Castroneves and Power, Team Penske drivers Juan Pablo Montoya (fourth) and Simon Pagenaud (sixth) ran near the front in the afternoon. At the completion of the second practice, 19 of the 21 drivers were within a half-second of Castroneves’ top lap.

Castroneves is one of a select few drivers who raced at PIR when it was on the 2005 Verizon IndyCar Series schedule. He won the 2002 race and said the track is still quite challenging, even though it has been reconfigured slightly to open up Turn 2.

“The track is pretty much the same,” the three-time Indy 500 winner said. “When you come into Turn 1, it’s like, are you going to turn? After the corner, you’re like, ‘Oh, it’s opening up.’ It’s very interesting on that scenario. Doesn’t mean it’s easy.

“We’re still talking about I don’t know how many Gs, but it’s a lot. It’s a very heavy steering wheel, which is going to be even more heavy at night because we are going to put fuel in and things like that.”

Ed Carpenter, owner and driver of the No. 20 Fuzzy’s Vodka Chevrolet, also drove at PIR for Verizon IndyCar Series races in 2004 and ’05. He was third quick in the evening session and likes how his car felt under the lights.

“As the night grew on you saw more and more people were doing race running, so the time charts really don’t mean much,” Carpenter said. “We’re all working through our individual test plans and we’re happy with where we are, we think we have good pace. I’m probably more encouraged by how my car feels in traffic and dirty air, so I’m really pleased with how the Chevy aero kit is handling turbulence whether it’s running behind a Chevy or a Honda.”