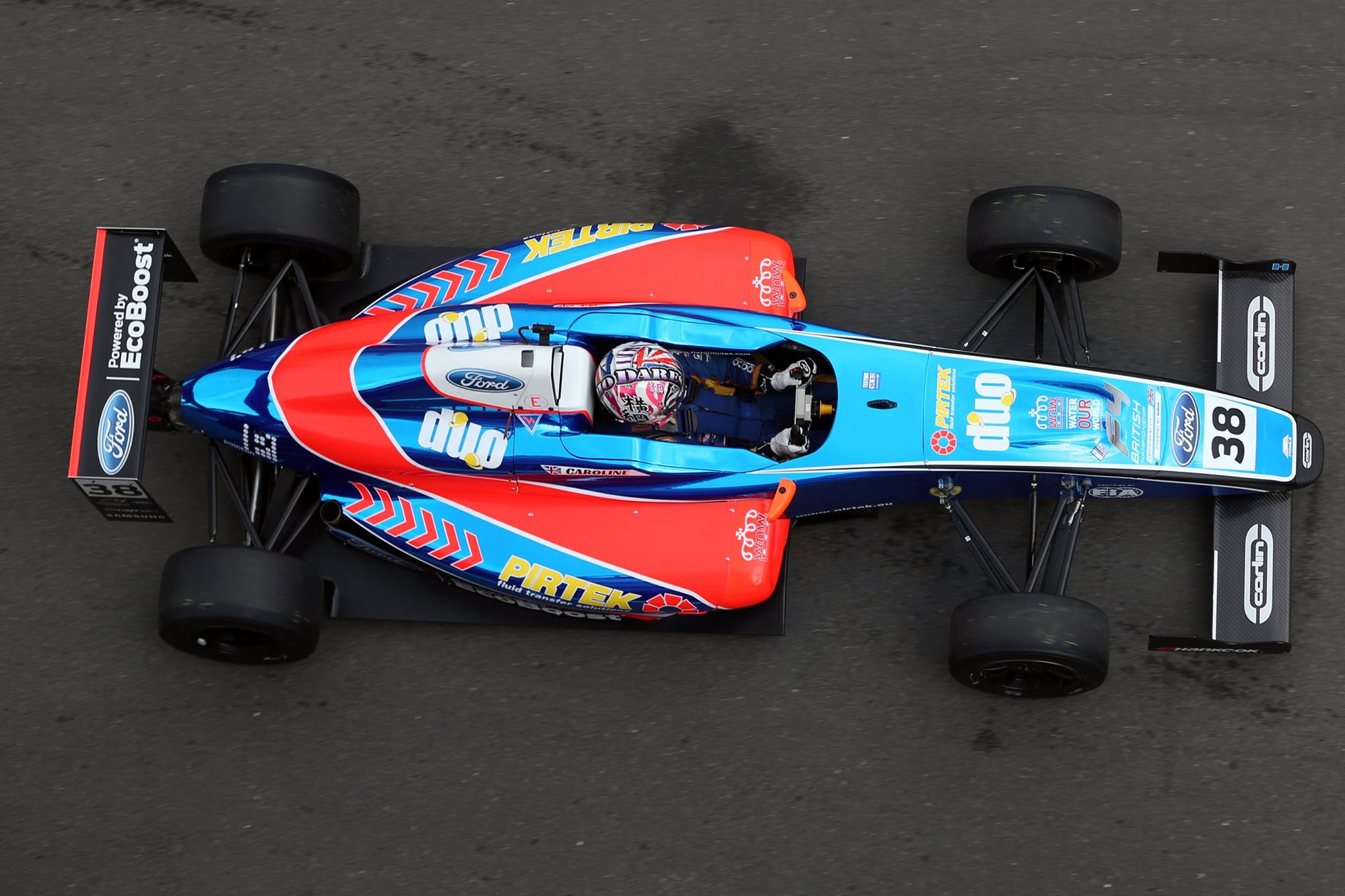 Having recorded the fastest ever lap by a Ford EcoBoost-powered F4 car in qualifying on his way to pole, there was no doubting the pace of Carlin’s Jamie Caroline heading into the opening round of the F4 British Championship certified by FIA – powered by Ford. The Pirtek Racing and Duo Motorsport backed rising star duly delivered with a lights to flag victory at Brands Hatch.

Caroline kept his calm despite plenty of wheel spin off the line, holding his own into the first corner from Alex Quinn, Oscar Piastri and Linus Lundqvist.

With clear air ahead, Caroline wasted no time building a gap to the chasing pack, rattling off fastest lap after fastest lap. His efforts were made redundant due to a safety car period caused by team-mate Lucas Alecco Roy venturing off at Paddock Hill bend. Caroline was unperturbed, immediately building a seven car-length lead from Quinn at the restart.

Quinn didn’t let Caroline escape however, and as the race reached its climax the TRS Arden duo of Quinn and Piastri reeled Caroline into their clutches. It made for nail-biting finish, which saw Caroline refuse to crack under pressure on his way to the chequered flag, albeit by just 0.290s.

Quinn recorded the fastest lap of the race as he challenged Caroline for the win, with Piastri just fractions of second behind. The Aussie recording a maiden podium in his first British F4 race.

There was no shortage of action throughout the field. Logan Sargeant climbed up to fourth to finish ahead of Carlin team-mate Patrik Pasma; both drivers beginning their campaigns with a strong point scoring start.

Billy Monger and Ayrton Simmons had a thrilling tussle for sixth, with Simmons darting all over the rear of Monger’s JHR Developments-prepared car. Both drivers are embarking on their second Ford EcoBoost-powered campaign this weekend and they brilliantly showcased the close wheel-to-wheel action the series has become renowned for.

Monger held on to sixth and became the first winner of a Ford F4 Challenge Cup class race. A new initiative for 2017 which will see drivers able to compete in a maximum of seven meetings on budgets of less than £100,000.

Oliver York (Fortec Motorsports) finished second in the Challenge Cup class on his way to a top 10 finish, with Richardson Racing’s Harry Webb standing on the third step of the podium.

Between Simmons and York could be found JHR Developments driver Manuel Sulaiman, recording a top 10 finish on his British F4 debut.

Jamie Sharp’s (Sharp Motorsport) fastest lap was just over half a second adrift of the fastest of the race on his way to 14th and like Sharp, Jacky Liu’s (GW Motorpsort) best lap came several laps from the end underlining the growing confidence of both drivers behind the wheel of their cars.

The fast starting Linus Lundqvist was forced to retire due to incident damage. Curtailing the Swedish single-seater champion’s efforts. The Double R racer will no doubt aim to bounce back tomorrow.

Attention now turns to tomorrow which plays host to the next two rounds of the F4 British Championship certified by FIA – powered by Ford. Ayrton Simmons will start from pole in the reverse grid race at 1040. Meanwhile the live-televised finale for the weekend will see today’s winner Jamie Caroline seek to record another victory from pole at 1620.