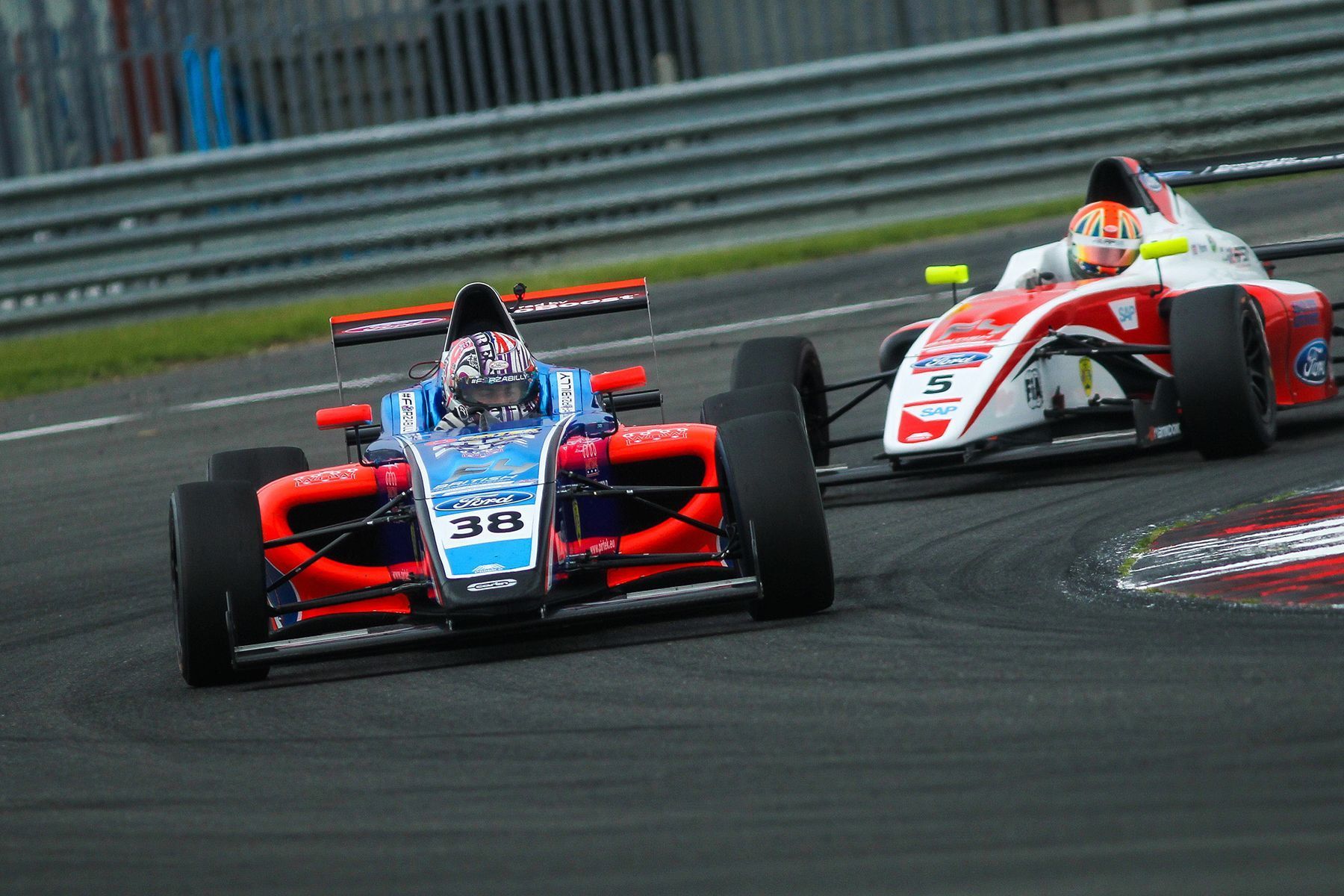 Championship leader Jamie Caroline returned to winning ways in Round 17 of the F4 British Championship certified by FIA – powered by Ford EcoBoost at Snetterton. In doing so the Carlin ace set a new record for most wins in a British F4 season; his tally of nine one better than that of 2015 champion Lando Norris.

Starting alongside poleman Manuel Sulaiman (JHR Developments), Caroline made a trademark lightning getaway to jump the Mexican off the line. The Pirtek Racing backed rising star promptly set about building a gap to Oliver York who had passed Sulaiman later on the opening lap. The latter spinning moments later which promoted Quinn up to third, who had already climbed a place from his fifth place grid slot.

While York and Quinn duelled for second place they began to eat into Caroline’s lead before the safety car was deployed on lap five. This was due to Karl Massaad’s Double R-prepared racer leaking fluid onto the track following contact with York’s team-mate Hampus Ericsson. The Swede would later be excluded from the race for causing avoidable contact with Massaad.

Caroline nailed the restart to put him sufficiently clear of York and proceeded to record the fastest lap on the penultimate tour of the Norfolk circuit before taking the chequered flag.

Having been passed by team-mate Quinn in the opening exchanges Caldwell then had to contend with Linus Lundqvist (Double R) and Logan Sargeant (Carlin) who both found a way past him before the safety car period.

Simmons and Piastri followed suit to get ahead of their team-mate, finishing sixth and seventh respectively. Spectators were treated to some spellbinding formation flying in the final laps as Simmons, Piastri and Caldwell jockeyed for position. Caldwell still doing more than enough to comfortably take his second Ford F4 Challenge Cup win, just hours after his first triumph in the class.

Up ahead Sargeant gained revenge on Lundqvist by making a move stick for fourth in the closing stages, after just missing out on the podium to the Swede in the opening race.

Patrik Pasma and Lucas Alecco Roy completed the top 10 ensuring that all Carlin runners finished in the points, Roy doing brilliantly to pick his way through the field from 16th on the grid.

Elsewhere, Fortec Motorsports’ Hoggard just missed out on his first points score in 11th having fought his way up through the field from 17th, ahead of Sulaiman who worked his way back up the order following his spin.