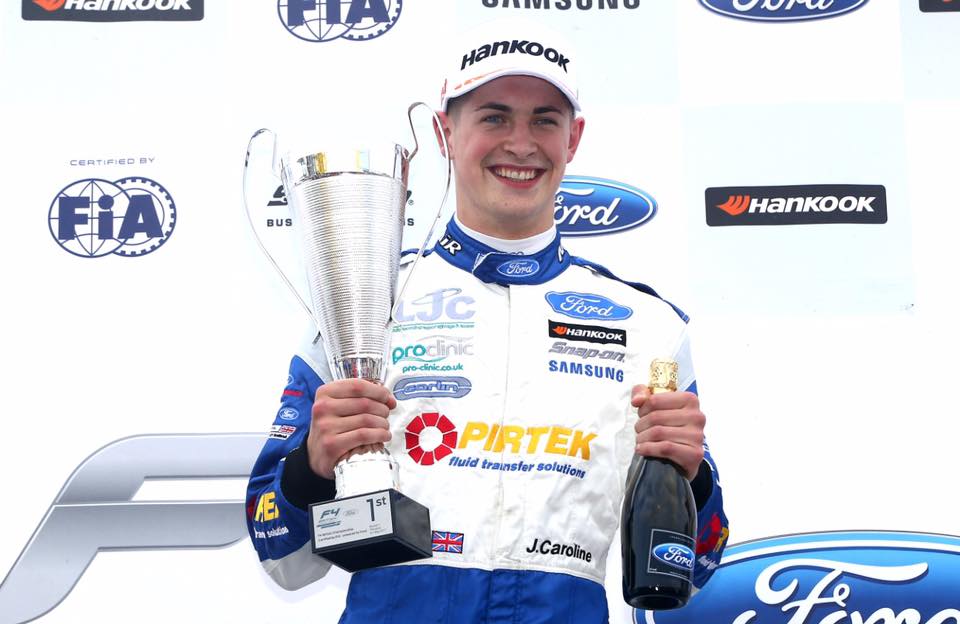 Jamie Caroline entered the record books by winning the final F4 British Championship race at Thruxton to make it three wins from three this weekend and seven for the season. The Carlin racer becoming the first driver in the history of British F4 to take a hat-trick of victories in one weekend. In doing so he extends his advantage at the top of the standings to 86 points from TRS Arden’s Oscar Piastri.

As had been the case in the first race of the day, Caroline wasted no time on the opening lap dispatching Oliver York (Fortec Motorsports) and Alex Quinn (TRS Arden). Finding himself with clear air ahead he escaped the clutches of the chasing pack, setting fastest lap on the way to a historic win.

Logan Sargeant made it a one-two for Trevor Carlin’s outfit, opportunistically seizing the runner-up spot having carried more momentum onto the start-finish straight to pass Quinn and York who were duelling it out at Club. The latter coming out on top to take third place and a clean-sweep of Ford F4 Challenge Cup class wins.

Quinn fell out of contention with a spin at Club due to clattering the kerbs in his bid to pass team-mate Piastri.

Meanwhile Double R’s Karl Massaad was flying in a similar fashion to his exploits in the opening race of the weekend, climbing from eighth on the grid to fourth in the space of four laps.

The Lebanese karting champion was soon all over the gearbox of York. He briefly snatched third only for York to hit back, unsettling Massaad and leaving him susceptible to Piastri and team-mate Lundqvist who passed him in quick succession. In a frenetic fight for fourth, Lundqvist battled past Piastri who then succumbed to Massaad.

Patrik Pasma brought home another strong points haul in seventh, while Jamie Sharp (Sharp Motorsport) and Harry Webb (Richardson Racing) continued their weekend-long duel in the points. The pair were incredibly evenly matched yet again; Sharp just getting the better of Webb by 0.308s with Daniel Cao within touching distance of them in tenth.

The F4 British Championship  heads to Oulton Park in Cheshire on 19-21 May for the next rounds of the season.