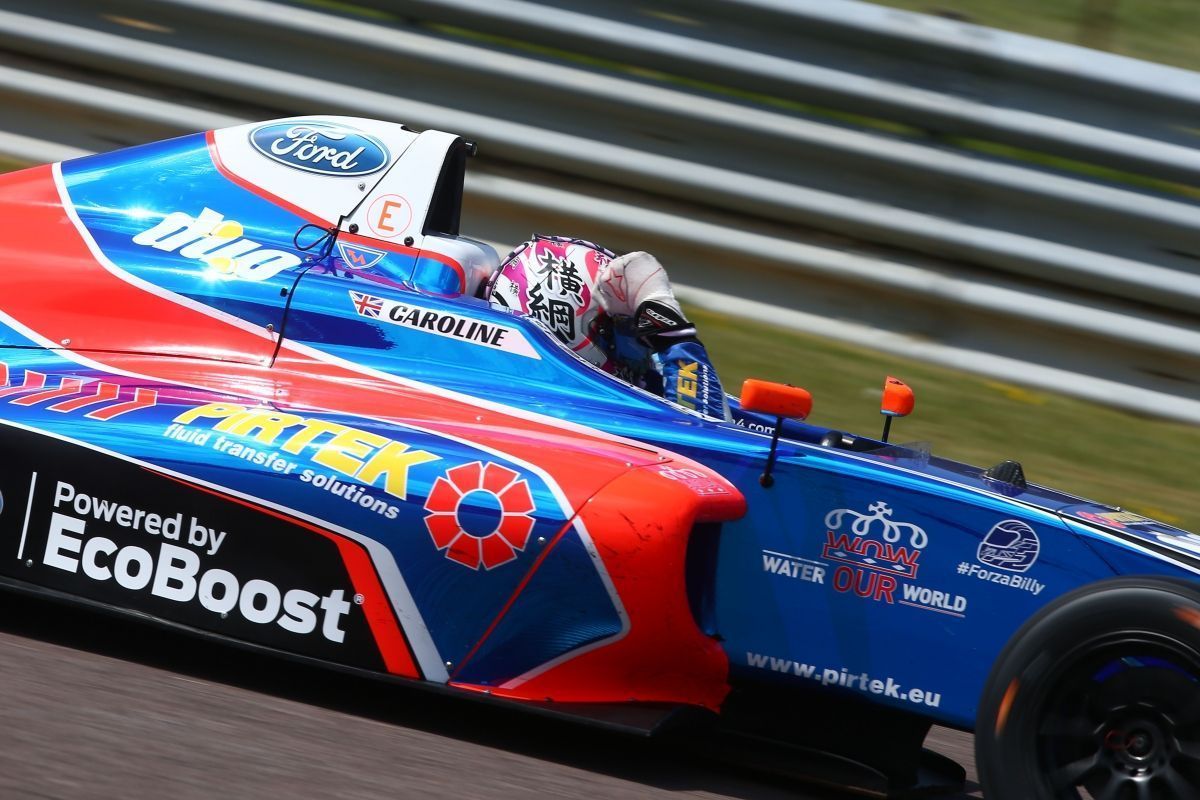 Jamie Caroline rocketed off the line from pole position and never looked back at a drying Oulton Park circuit in round 10 of the F4 British Championship. In doing so the Carlin ace increased his victory tally to eight for the campaign, equalling the record for number of wins in a season which belonged to 2015 champion Lando Norris who also set the benchmark with Trevor Carlin’s outfit.

TRS Arden’s Alex Quinn was in hot pursuit of Caroline throughout the race having got the better of Carlin’s Logan Sargeant at the start along with Linus Lundqvist (Double R Racing) and Patrik Pasma (Carlin).

Caroline wasted no time in the opening laps, building up a gap of several seconds and despite Quinn’s strong pace he managed to maintain the advantage on the way to the chequered flag.

In addition to Sargeant, Lundqvist leapt past Piastri at the start to earn himself third and was rapid in the closing stages rattling off consecutive fastest laps to close in on Quinn.

While another podium finish eluded Pasma he did brilliantly to withstand pressure from team-mate Sargeant to come out on top in the intra-team battle for fourth.

Arguably the most thrilling battle was the duel between Piastri and Richardson Racing’s Harry Webb. The latter opportunistically made up two places on the opening lap and hustled Piastri for a large part of the race, jinking from left to right trying to force the Aussie to make a mistake. Piastri was resolute in his defence however and did well to keep Webb at bay; putting daylight between them in the closing laps.

Seventh place for Webb ensured his 10th consecutive points score of the season and his first Ford F4 Challenge Cup win of the campaign, allowing him to close down the gap to Oliver York in the class standings.

Ayrton Simmons (TRS Arden) was another fast starter, making up a couple of places, but contact early on with Oliver York (Fortec Motorsports) meant both drivers were left with an uphill battle.

A nosecone change for Simmons put him completely out of contention, meanwhile York did well to fight his way back into the points before the chequer. A move around the outside of Jamie Sharp (Sharp Motorsport), who had been running as high as ninth, on the way into Hislops the highlight.

Ninth place went the way of Lucas Alecco Roy (Carlin) behind Karl Massaad (Double R Racing), having been embroiled in an entertaining duel with Sharp in the first half of the race, while Daniel Cao (Double R Racing) just missed out on a point in 11th.

Jacky Liu made a storming start for GW Motorsport. He broke into the points on the opening lap, having climbed five places. However, his charge came to an abrupt end after going straight on at Lodge Corner and into the gravel trap.

Ford’s young stars are back in action at 1745 for round 11 which will see Piastri start from pole in the reverse grid race.