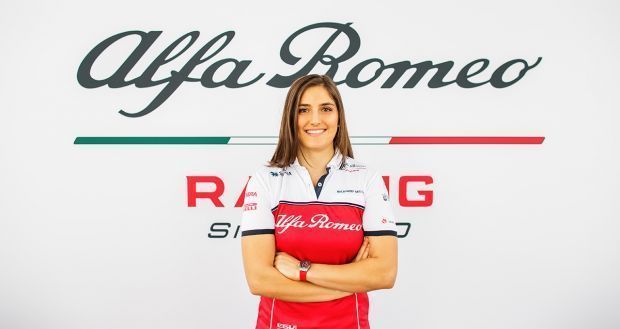 Alfa Romeo Racing has confirmed that Tatiana Calderon will remain as its test driver for the 2019 F1 season.

The association which started in 2017 with Sauber, continued in 2018 where Calderon got the chance to drive the current generation F1 car, the C37, in Mexico as a filming day run along with a proper two-day test in a 2012 Sauber at Fiorano.

As she confirmed in an interview to FormulaRapida.net, her deal with the team was set on a yearly basis. Following the announcements made by Sauber Junior Team by Charouz for its F2 team, Calderon’s missing name raised some speculations.

However, Alfa Romeo has now confirmed that the Colombian will stay on as the F1 team’s test driver alongside regulars Kimi Raikkonen and Antonio Giovinazzi. She will dovetail her F1 programme with racing in the F2 series with BWT Arden.

“I’m extremely happy to continue as Test Driver for Alfa Romeo Racing this year, they’ve done a fantastic job from one year to the other and it’s always a privilege to work alongside such an experienced people,” said Calderon.

“They gave me my first opportunity to drive a F1 car and I love being part of the team. Hopefully we can achieve great things together in the near future. I want to thank Frederic Vasseur and Alfa Romeo Racing for believing in me and continuing this journey together.”

Vassuer added: “We are pleased to announce that we will continue our collaboration with Tatiana Calderon as Test Driver. The team is impressed by Tatiana’s commitment, persistence and skill.

“She delivered a good performance when she was given the opportunity to drive a F1 car for the first time last season and has proven to be a valuable member of our team. Together, we will work on further developing Tatiana’s skills as a driver and the Alfa Romeo Racing project.”

Full details of her programme with Alfa Romeo hasn’t been revealed – that is if she gets to drive in free practice sessions and or the in-season tests – with several names linked to a test role for 2019 which includes the Ferrari juniors Mick Schumacher and Giuliano Alesi.