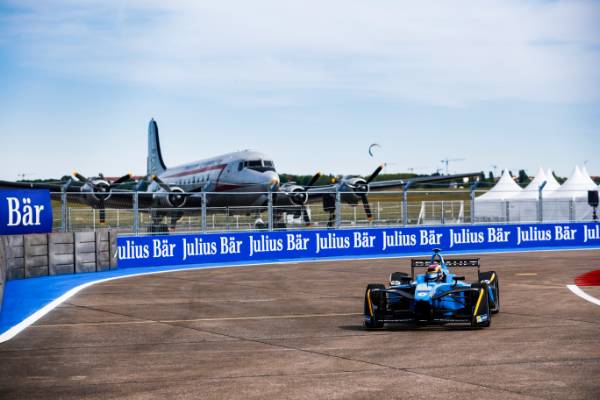 Sebastien Buemi has extended his lead in the 2016/17 FIA Formula E Championship to 32 points after picking up his 12th career win in the all-electric single-seater series.

However, the Renault e.dams driver was not first across the line around the revamped Tempelhofring airfield circuit, but when on-the-road winner Felix Rosenqvist was given a 10-second penalty for an unsafe release in the pits, he was there to pick up the pieces.

With a large part of the fanatical 24,000-strong crowd who filled the grandstands attending the event over the weekend there to cheer him on, Buemi was handed the winner’s trophy by Formula E super fan James Harmon, creating an emotional coda to a fantastic event.

“First of all, congratulations to Felix, I feel like he’s the one who deserved the victory today,” Buemi said. “We try to bring new updates and sometimes it can be quite difficult to put them into proper race condition. Yesterday it didn’t work so we came back to what we had in Paris and Monaco, and it worked quite well. It’s quite difficult to practice outside of the races and bring things that work straight away, so I’m happy that we managed to have a good pace in the race. The car was very quick – I think we were more or less the same pace [as Rosenqvist]. I’m very happy with that result, it just tastes a little bit different than normal.”

After taking his maiden win in yesterday’s race, Rosenqvist was once again the man to beat in Berlin. He converted his Julius Baer pole position into a strong early lead, and was never really under any direct threat from Buemi.

However, as he left the garage following his mandatory mid-race car change, his Mahindra team-mate Nick Heidfeld was pitting for his stop. There was a brief period of confusion as the two red and white cars tried to avoid contact with each other, but remarkably Rosenqvist re-joined the race still in the lead.

After reviewing the incident, the race stewards deemed it to be an unsafe release resulting in a 10-second time penalty. This removed any chance Rosenqvist had of victory, but such was the leading duo’s advantage over the rest, he was only demoted to second place.

“I think in a couple of hours when I look back at this weekend it will be as a very positive one, both for me and the team,” said Rosenqvist. “Obviously, the result is very disappointing, it would have been very cool to take another win but it’s just a fantastic weekend overall. Today, we were under pressure from Sebastien, we knew that we would be close as they looked very strong compared to yesterday. I knew that I had to drive a perfect race, every corner we had to drive perfect. I think we did a great job.”

Third went to Lucas di Grassi, extending his record number of Formula E podiums to 19 from just 29 races. From seventh on the grid, he drove a battling race, initially passing the NextEV NIO of Oliver Turvey, before gaining a further place when the DS Virgin Racing team-mates banged wheels, which sent Sam Bird off the track and into the run-off area.

Di Grassi then picked off the second DS of Jose Maria Lopez with a nice move, before entering into a long, entertaining battle with the TECHEETAH of Jean-Eric Vergne. Di Grassi eventually found a way through to end the weekend with a second podium finish.

“I think the event was amazing, the track was well designed,” said di Grassi. “For us this weekend, we didn’t have the performance to match the Mahindra especially. I had a lot of fun with JEV [Jean-Eric Vergne]. He is very difficult to overtake. We had better pace today – yesterday we found some pace, which meant we could keep up a little bit with these guys, but we need to improve. There is still a couple of tenths we need to find to be able to fight [for the win].”

In the second ABT Schaeffler Audi Sport car, Daniel Abt also fought his way by Vergne, using the additional energy from his FanBoost to make the move. Lopez too found a way past the Frenchman, who was struggling to manage his energy in the longest Formula E race in history.

The TECHEETAH driver eventually came home in sixth, just ahead of Bird and the second Renault e.dams of Nico Prost, who kept up his record of scoring in every race this season in eighth. Turvey picked up two points for ninth, while Heidfeld finally came home in 10th.

After his podium finish on Saturday, Heidfeld was hopeful of being among the fight for the win at his home race. But when a sensor issue forced him to stop on track and turn his car off in qualifying, he was left at the back of the grid.

He charged his way up into the points during the first half of the race before dropping back just before the stops. His incident with Rosenqvist put him back even further but he recovered to score a consolation point.

Maro Engel picked up damage to his Venturi during the opening lap skirmishes and was left with only the bonus point for Visa fastest lap to play for, which he duly delivered.

The FIA Formula E Championship now moves Stateside for the first-ever New York City ePrix on July 15 and 16. It’s the most eagerly awaited race in the championship’s short history. This is a ground-breaking event that is taking motorsport to the unofficial capital city of the world for the very first time. Don’t miss it!