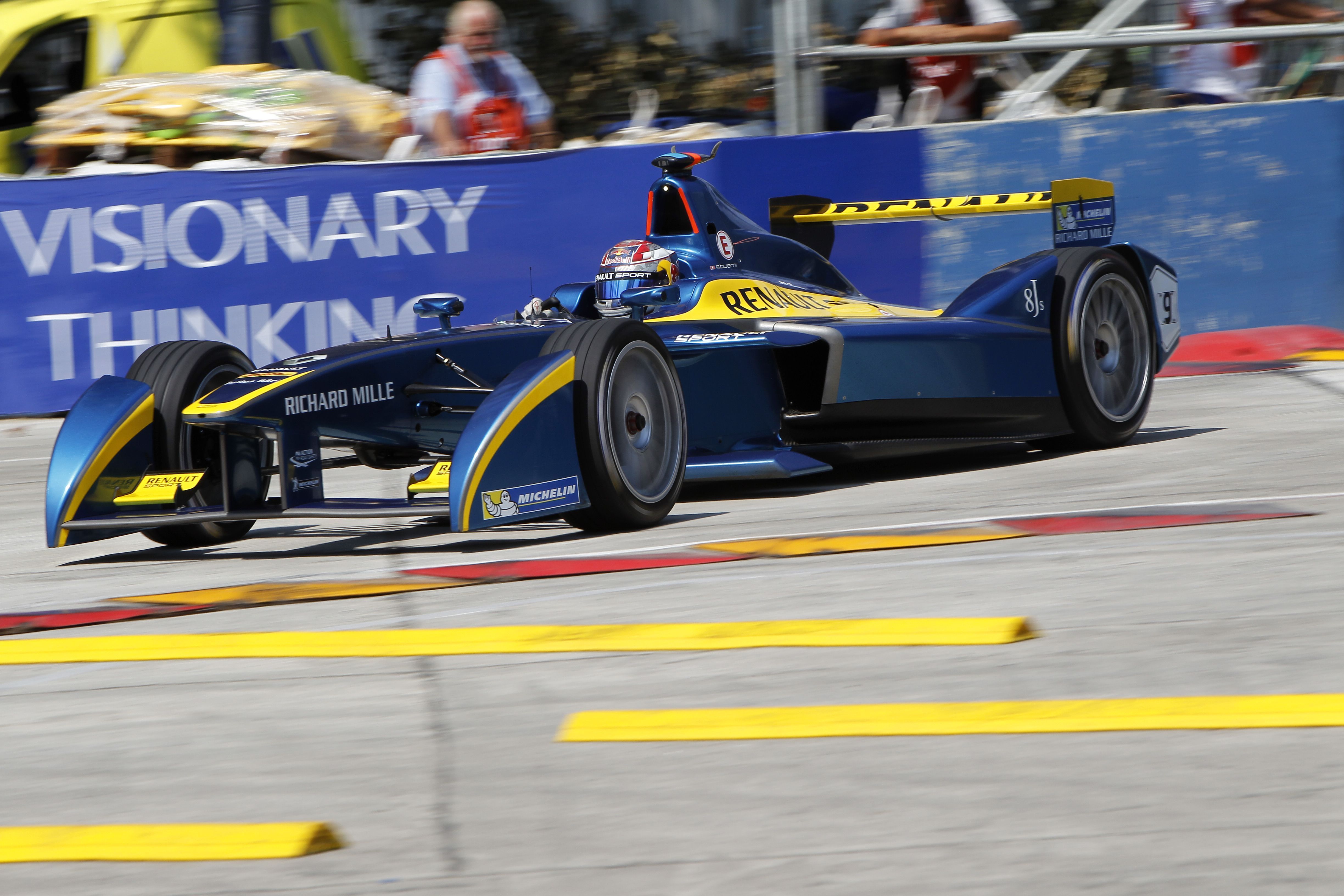 Sébastien Buemi took his second pole position in FIA Formula E, the fourth for his team e.dams Renault, during the qualifying in the streets of Long Beach, California, USA. The Swiss driver will start in front of Daniel Abt and the championship leader, Nicolas Prost.

The first qualifying group was integrated by: Hedifeld, Alguersuari, Pic, Speed and Vergne.

The Andretti Autosport cars (Speed and Vergne) has dominate the session, especially Vergne who set the fastest lap of the day in 57.277 and then the Frenchman improved his lap time for one tenth. Speed finishes only in a half tenth behind his teammate.

Then it was the time for second qualy group formed by: Prost, Bird, Duval, Trulli and Senna.

Sam Bird (Virgin Racing) was the one that highlight first when he took the third place, followed by Prost (e.Dams Renault) on fourth. Loïc Duval (Dragon Racing) almost crashed into the wall in his flying lap but it was for anything the Frenchman finished on last place.

But the surprise of the group was the incredible lap of Nicolas Prost who took the provisional pole position thanks to his 56.944 seconds lap time.

Then, the third group was one to watch with Lucas di Grassi, Sarrazzin, Da Costa, Duran and Piquet Jr.

It was hard for that group to improve the lap times, luckily Da Costa (Amlin Aguri) was able to up in fourth place, and it was the time for Di Grassi (Audi Sport Abt) who took the second place in an impressing lap performance. On last minutes, Piquet Jr (China Racing) finishes so close to the first place, only 0.03 seconds behind Prost. Piquet could have got the pole if he wasn’t disturbed by Sarrazin (Venturi) who also was on fastest lap, taking the seventh place.

During the rest time between group 3 and 4, the Di Grassi car got fired due to an external battery.

Finally, the group 4 took the track, with Abt, Buemi, D’Ambrosio, Liuzzi and Chandhok.

French speakers’ drivers are who took all the pole positions of the series, and that is what D’Ambrosio (Dragon Racing) and Buemi (e.Dams Renault) had tried, taking the eighth and ninth place before the red flag came out due to a crash that Liuzzi (Trulli Racing) caused after touch the wall in turn 5 and stop his car.

The green flag came again to the track with 4 minutes remaining, which was an exciting minutes. Daniel Abt (Audi Sport Abt) took the provisional pole but immediately came Buemi to improve the German lap time.

Second pole position for Buemi in the championship, fourth for e. Dams Racing.