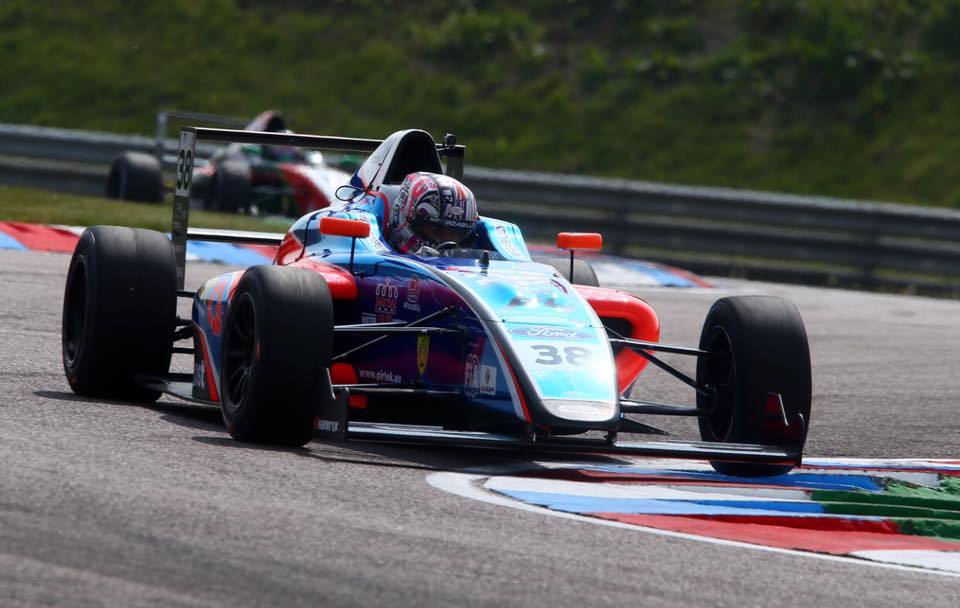 Jamie Caroline put in yet another inspired performance at Thruxton Circuit in the F4 British Championship certified by FIA – powered by Ford EcoBoost to take his victory tally to five for the season.

The Carlin racer had things far from his own way though. A good start from third on the grid failed to pay dividends due to an off-track excursion, only to see him bounce back.

Having fallen to seventh, Caroline was already up to fourth heading into Club towards the end of the fourth lap. The Pirtek Racing-backed star got in on the high-speed, slipstreaming action which has become a hallmark of British F4 races around the 2.3-mile Hampshire circuit.

Caroline then dispatched poleman Oliver York (Fortec Motorsports), Alex Quinn (TRS Arden) and Logan Sargeant (Carlin) in one fell swoop on the very same lap. As the three drivers squabbled through Club, Caroline pounced with a better exit from the chicane, boldly running around the outside of the trio and into the lead of the race by the time he crossed the line to commence lap five.

Caroline immediately set about breaking the tow to the cars behind, building a gap of over two seconds which he carefully protected on his way to the chequered flag.

Quinn made a welcome return to the podium, at one point dropping to fourth as others benefited from the slipstreaming effect. The Cornish racer kept his cool and turned the tables to make his way back up to second and pull clear of the field.

Double R Racing’s Karl Massaad claimed the final podium spot, his first in British F4 after an excellent drive from eighth on the grid. The Lebanese driver rapidly making his way up to fourth by the end of the fourth lap and then squeezing past York on lap on six.

Massaad’s team-mate Linus Lundqvist staged an impressive fight back following a spin early in the race due to contact at Club. It left the Swedish single-seater champion down in eleventh. However, he climbed his way up to fifth by the time the chequered flag fell, setting a new lap record of 1m 13.756s on lap eight with a staggering average speed of 114.99mph.

Lundqvist almost stole fourth from York who won the drag race to line. It saw five drivers, including Sargeant, Piastri and Simmons covered by just over half a second; Sargeant having pulled off a beautiful overtake on Piastri at the final chicane in the latter half of the race.

Jamie Sharp (Sharp Motorsport) finished in the points for the third time this season on the back of his best qualifying result in ninth, while Richardson Racing’s Harry Webb picked up the final point having started 13th.

Elsewhere, Lucas Alecco Roy’s race came to an end on the first lap following contact with Daniel Cao at Club, the latter narrowly missing out on the points paying positions ahead of Jacky Liu and Patrik Pasma.