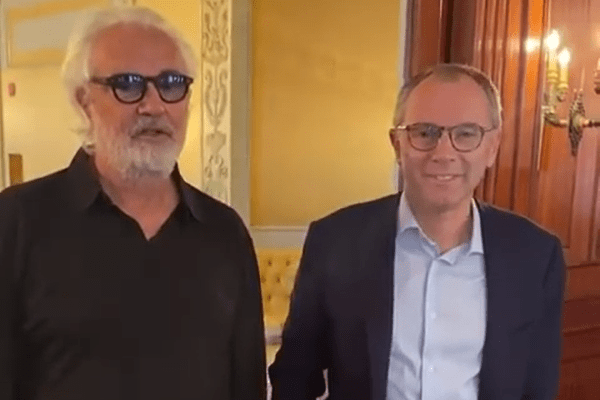 Flavio Briatore is likely to make his F1 return in 2022 after he shared a video of his meet with Stefano Domenicali on Monday evening.

The former Benetton and Renault F1 boss Briatore, who was pushed out of the sport due to the infamous ‘crashgate’ incident, is likely to make his return to the sport in 2022. After the events of the 2008 Singapore GP, he was banned from the FIA events.

However, his ban was overturned in 2010 but Briatore was not interested in a return, even though he followed and talked about the sport religiously. He is still connected with Fernando Alonso, who made his F1 return this year with Alpine/Renault.

But with both Max Mosely and even Bernie Ecclestone gone, who were then heading the FIA and F1, respectively, Briatore has hinted on a return to the sport in 2022 after he shared a video of a meeting with current boss Domenicali on Monday evening.

“So, stay tuned, lot of fun for the next era of Formula 1,” remarked Domenicali, as Briatore added: “New energy, new power and new excitement, Formula 1.” He further added: “A brand new chapter in Formula One is about to start: we will bring you all the excitement, the entertainment, the fun and energy that this fantastic sport deserves! STAY TUNED!”

On the same post, Red Bull F1 chief Christian Horner stated: “Great to see you back involved.” It is not clear what and how Briatore will be involved in the sport, but the news could receive mixed reactions, considering some strong opinions against him.