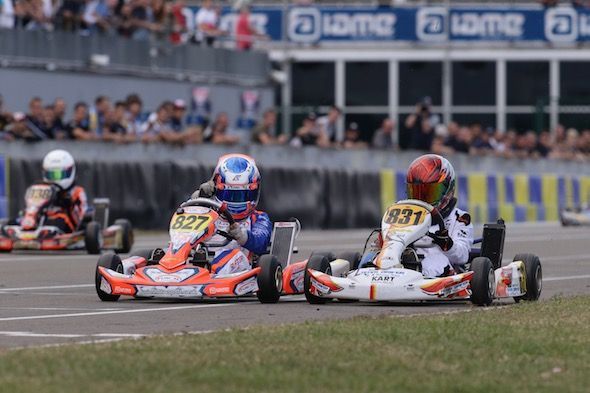 Last weekend was the IAME International 2018 Final in Le Mans. Brent Crews won the race after a heads-up on the last lap with Freddie Slater. The spanish driver Miguel Peiró cameback 27 positions and finished fifth.

After the pre-final, the starting grid for the final of the Mini category was made of: The british driver of KR Motorsport, William Macintyre, who started from the pole position, Freddie Slater (Fusion Motorsport) second, Juan Francisco Soldavini (Parolin Racing Kart) third and Brent Crews (KR Motorsport) fourth.

In the start of the race, the first accident occurred. Ruben Volt (Dan Holland Racing) suffered an accident and lost positions until the last. Although he was able to continue. And at the end of this first lap, another accident caused the presence of the yellow flags with the security system “Slow” of constant speed.

At that moment, Macintyre was first, followed by Slater, Soldavini, Fletcher and Pavan.

At the start of lap 5 the race resumed. In that same lap, the spanish Alejandro Meléndez Pardi (CRG Racing Team) placed fifth after overtaking Pavan. Brent did the same, placing sixth and leaving Pavan in seventh position.

On the straight line of the lap 6, Slater overtake Macintyre and started to lead the race. Furthermore, on the same lap Brent continue winning positions and overtook Meléndez. Fletcher did the same with Soldavini placing in third place.

On lap 7, Pavan also overtook Meléndez who lost two positions, went down from fifth to seventh place in one lap. While Crews reached the fourth position after overtaking Soldavini.

Brent Crews had the decided to win the race and, on the lap 8, he overtook Fletcher and later Macintyre. We entered the last lap with Slater as leader, Crews second, followed by Soldavini, Macintyre and Meléndez.

In the first corner of the final lap, Crews overtook Slater, and there started a hand to hand between them to take the victory. Slater tried to regain the lead throughout the lap, but Crews resisted closing the spaces.

Finally, in a few corners for the end, Slater managed to overcome Crews and take the lead, but he did not give up and fought to get to the last corner with options. He approached Slater and appeared to the final straight in parallel with him.

In a “photo-finish” final it was Brent Crews who won the race for the minimum difference of 0.007 seconds.

Outstanding performance of the Spanish driver Miguel Peiró Luzarraga (FA Racing Spain). He was the quicker in the qualifying on Thursday but had a problem in the prefinal and started from the 32nd position in the final. He signed a memorable performance, coming back 27 positions and finishing fifth.