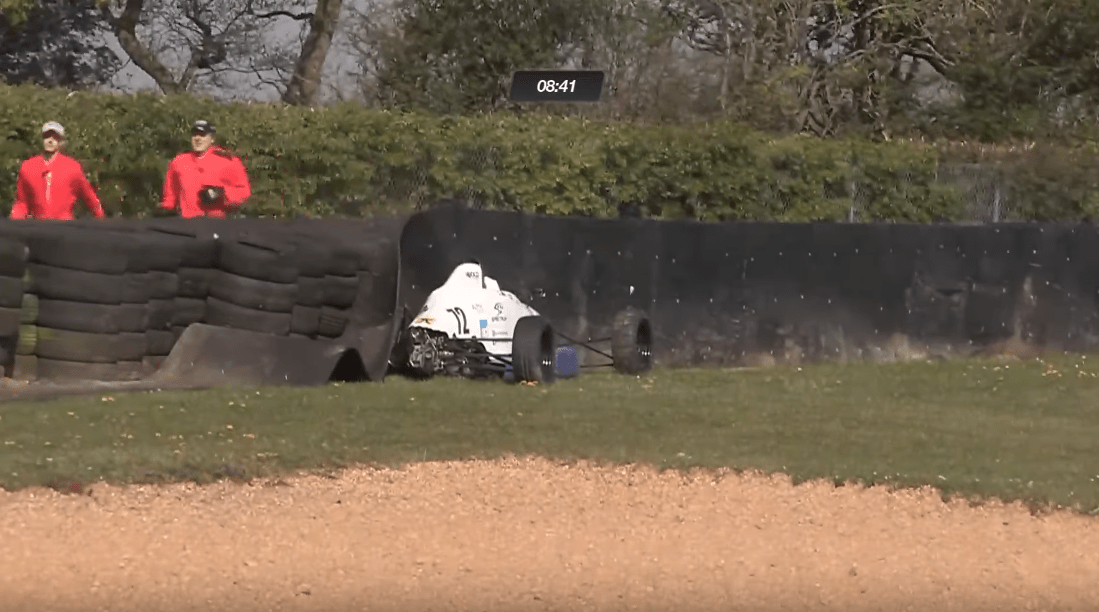 Multiple F1 ESports champion and Mercedes’ Brendon Leigh did not have a straightforward debut in the FF1600 series at Snetterton as a spin dampened his chances.

Having raced in the virtual world and having had his track debut in Race of Champions albeit in closed-wheel cars, F1 ESports champion Leigh had a hard task at hand when he made his single-seater debut in the BRSCC National FF1600 at Snetterton last weekend.

Leigh signed up with Kevin Mills Racing alongside Neil Maclennan and Michael Macpherson for Snetterton and Oulton Park rounds – with more races to be added as per the British racer’s commitments in the 2019 F1 ESports series.

He started off well finishing fourth – and the leading rookie – in the lone practice in the #72 Spectrum car with teammate Maclennan just ahead in third and Macpherson eighth. The qualifying saw Leigh doing a superb job to be fifth quickest.

Like many others, one of his quickest lap was deleted due to track limits but still he managed a 2m01.755s lap which was 0.586s slower than the pole-sitter. Teammate Maclennan was only 0.112s ahead of him, whereas Macpherson was eighth again.

It almost became a dream start for Leigh when he originally finished fourth in Race 1 after a hefty battle with Jonathan Browne but the wheel-to-wheel was too much in the end as the stewards awarded him a 15.5s penalty after the race.

It was given as per the Motorsport UK C1.1.5 regulation which states ‘driving in a manner incompatible with general safety’. Browne dropped to 10th originally but was classified ninth after the penalty with Leigh finishing 10th – as the second best rookie.

The Race 1 scuffle started Leigh’s troublesome time as he spun off in Race 2 from 10th on the grid upon re-start after an initial safety car period for an incident on Lap 1. His crash also brought out the red flag as marshals had to retrieve the stricken car.

The luck turned sour in the final Race 3 when starting from 18th, he couldn’t get going and was forced to retire. As for his teammates, Maclennan won the final race while he finished fifth in Race 1 and third in Race 2 and Macpherson had sixth, fifth and a DNF to his name.