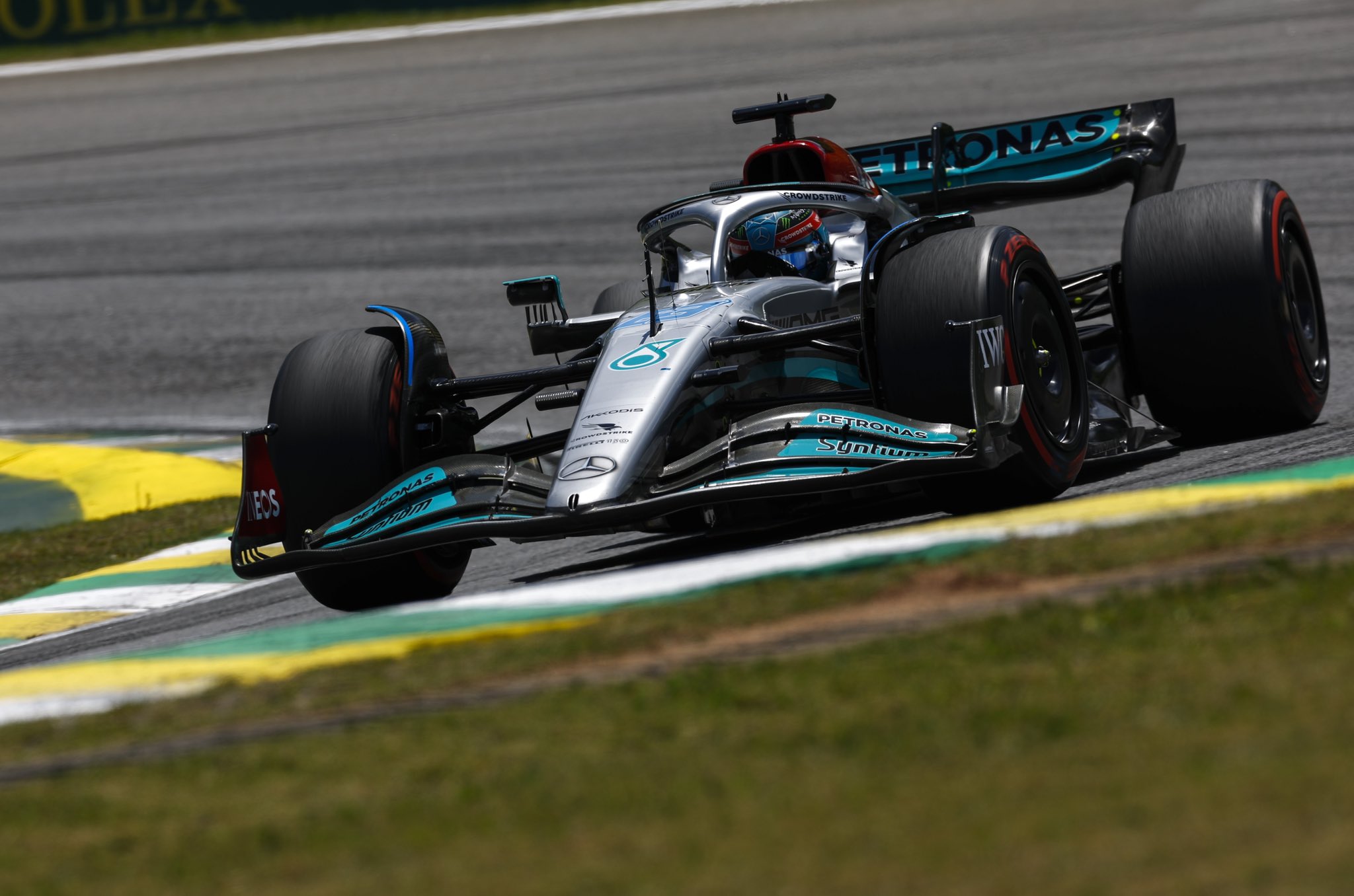 George Russell secured his first F1 win in Brazil GP as Mercedes got their first in 2022 in a 1-2 with Lewis Hamilton P2 and Carlos Sainz P3.

Having won the sprint race, Mercedes’ George Russell made a clean start in F1 Brazil GP at Interlagos to lead from teammate Lewis Hamilton as Red Bull pair of Max Verstappen and Sergio Perez slotted in third and fourth behind them.

Perez had McLaren’s Lando Norris on his left at Turn 1 but managed to stay ahead, with he Brit keeping the Ferrari pair at bay where Charles Leclerc was ahead of Carlos Sainz – both of them opting for the medium tyres to start the grand prix.

Aston Martin’s Sebastian Vettel was eighth with AlphaTauri’s Pierre Gasly and Haas’ Mick Schumacher in the Top 10, gaining from the collision between Haas’ Kevin Magnussen and McLaren’s Daniel Ricciardo which is under investigation.

After a brief safety car period to clear the cars of Magnussen and Ricciardo, the re-start saw Russell lead the way in F1 Brazil GP but Hamilton and Verstappen made contact at Turn 2-3 sequence where the Dutchman tried to take the inside line.

With no space, they touched which dropped Verstappen to back and needing a pit stop, while Hamilton dropped to eighth. Moments later, Norris and Leclerc came together after the Brit ran a bit on the kerb and was thrown on the track.

He clipped Leclerc which sent onto the barrier but he managed to continue on. He was forced to pit, with both the incidents under investigation. Russell led the way from Perez and Sainz, with Norris in fourth from Vettel, Gasly and Schumacher.

Hamilton was eighth from Aston Martin’s Lance Stroll and Alfa Romeo’s Valtteri Bottas in the Top 10. Both Verstappen and Norris were handed 5s time penalty for causing a collision as Hamilton started to make inroads and was up to fourth after clearing four cars.

Russell started to extend his lead from Perez and Sainz, with Hamilton gaining on them. Norris kept Vettel at bay for fifth as Gasly was seventh from Schumacher. Bottas passed Stroll for ninth who dropped out of the Top 10 with Alpine’s Esteban Ocon in 10th.

With Russell leading Perez, Sainz decided to pit early for a soft switch. His right-rear brakes seemingly was on fire when he came in but it cooled down by the time he headed out. Both Leclerc and Verstappen also pitted again after their initial stop for damage.

Russell kept the lead after his stop even though Hamilton was leading F1 Brazil GP. Perez was third in the order with Sainz fourth. Post the pit stop for Hamilton, he was down to fourth but got third when Sainz decided for a second stop a few laps later.

Bottas gained from the pit stops to be fifth from Vettel, as Ocon was seventh from Norris, whose 5s pit stop and a steering wheel issue dropped him to eighth. The Brit had Leclerc on his tail, with Schumacher in the Top 10 from Verstappen.

The German’s pit stop was under investigation after it was spotted that a Alfa Romeo member was strolling near their pit box. After Hamilton caught Perez and passed him for second, both pitted few laps later for their final stop.

Russell continued to lead F1 Brazil GP after his stop but Sainz was close behind him. Hamilton was down to third from Perez as Bottas was fifth. A Virtual Safety Car was deployed soon for Norris, who stopped at the side of the track due to an issue.

Sainz and Alonso pitted for tyre change, as the full safety car was then deployed as it became difficult to get the car in. It was Russell in the F1 Brazil GP lead from Hamilton, Perez, Sainz, Bottas, Leclerc, Vettel, Ocon, Alonso and Verstappen in the Top 10.

After Williams’ Alexander Albon and Nicholas Latifi were allowed to get back onto the lead lap, AlphaTauri’s Yuki Tsunoda seemingly wasn’t allowed which kept him in the pack. Russell continued to lead F1 Brazil GP from Hamilton and Perez.

The Mexican had Sainz on his tail along with Leclerc, with Alonso gaining places to be sixth from Bottas, who was cleared by Verstappen for seventh. Ocon was up to eighth after Bottas’ lock-up at Turn 1. Vettel rounded out the Top 10.

Up front, Russell had control over Hamilton as Sainz was up to third but not troubling the Mercedes ahead, with Leclerc, Alonso and Verstappen managing to clear Perez who was struggling on the medium tyres. Bottas and Vettel were in the Top 10.

Finally, Mercedes broke the winless jinx of 2022 F1 season as Russell took his career first in Brazil GP in a 1-2 finish from Hamilton. Sainz was third despite pleas from Leclerc to let him pass thinking about the championship standings.

Likewise, Verstappen retained seventh from Perez despite a late call from Red Bull, as Alonso ended up fifth ahead of them. Ocon in eighth made merry for Alpine as Bottas ninth from Stroll who passed Vettel late in the race to be 10th.

Gasly was 12th from Guanyu with Schumacher dropping to 14th after early Top 10 run as Albon, Latifi and Tsunoda rounded out the 17 runners. DNF: Norris, Ricciardo, Magnussen.

Full classification after the most edge-of-your-seat race of 2022!#BrazilGP #F1 pic.twitter.com/HUKJLAYUuO

UPDATE: Alfa Romeo were fined by 1000 euros after a team member not associated with the pit crew was found around the Haas garage when Schmacher came to pit. “The Stewards heard from the team representative. The Stewards reviewed the video from several angles.

“A member of the Alfa Romeo team who is not involved in pit stops entered the pit lane working area and was in a position where he was unreasonably close to the path of the approaching Haas car which was starting its pit stop. The Stewards determined that this was an unsafe situation,” said the statement.

Ricciardo, meanwhile, was adjudged the guilty party in his incident with Magnussen where he has handed a 3-place grid drop for Abu Dhabi GP along with two penalty points. “The Stewards heard from the driver of Car 3 (Daniel Ricciardo), the driver of car 20 (Kevin Magnussen) and team representatives The Stewards reviewed the video from several angles and reviewed GPS data presented by the McLaren team and telemetry from their own sources.

“Ricciardo made contact with Magnussen at Turn 8 on lap one, which caused Magnussen to spin, and subsequently both cars crashed. McLaren explained that in their view Magnussen was slower at the exit of turn eight than the other cars ahead, which made it difficult to judge the closing rate, as the two cars interacted. Ricciardo explained that in his view, he had slowed sufficiently that he was not going to collide with Magnussen and that he slightly misjudged it.

In a further explanation from the FIA into the Tsunoda matter where he finished a lap down despite the ‘unlap process’, it noted: “We have reviewed the situation regarding the unlapping of Car 22. All of the systems functioned correctly and according to the regulations. The unusual situation arose as a result of the idiosyncrasies of the specific circuit.

“Car 22 was the first to cross SC1 following the deployment of the Safety Car. On the following lap he therefore became the first car to cross SC1 line for a second time, which would normally trigger the systems to indicate he is eligible to unlap. However, at this time he entered the Pit Lane and was able to go faster than the train of cars behind the Safety Car. In doing so, he unlapped himself when crossing the control line in the Pit Lane.”