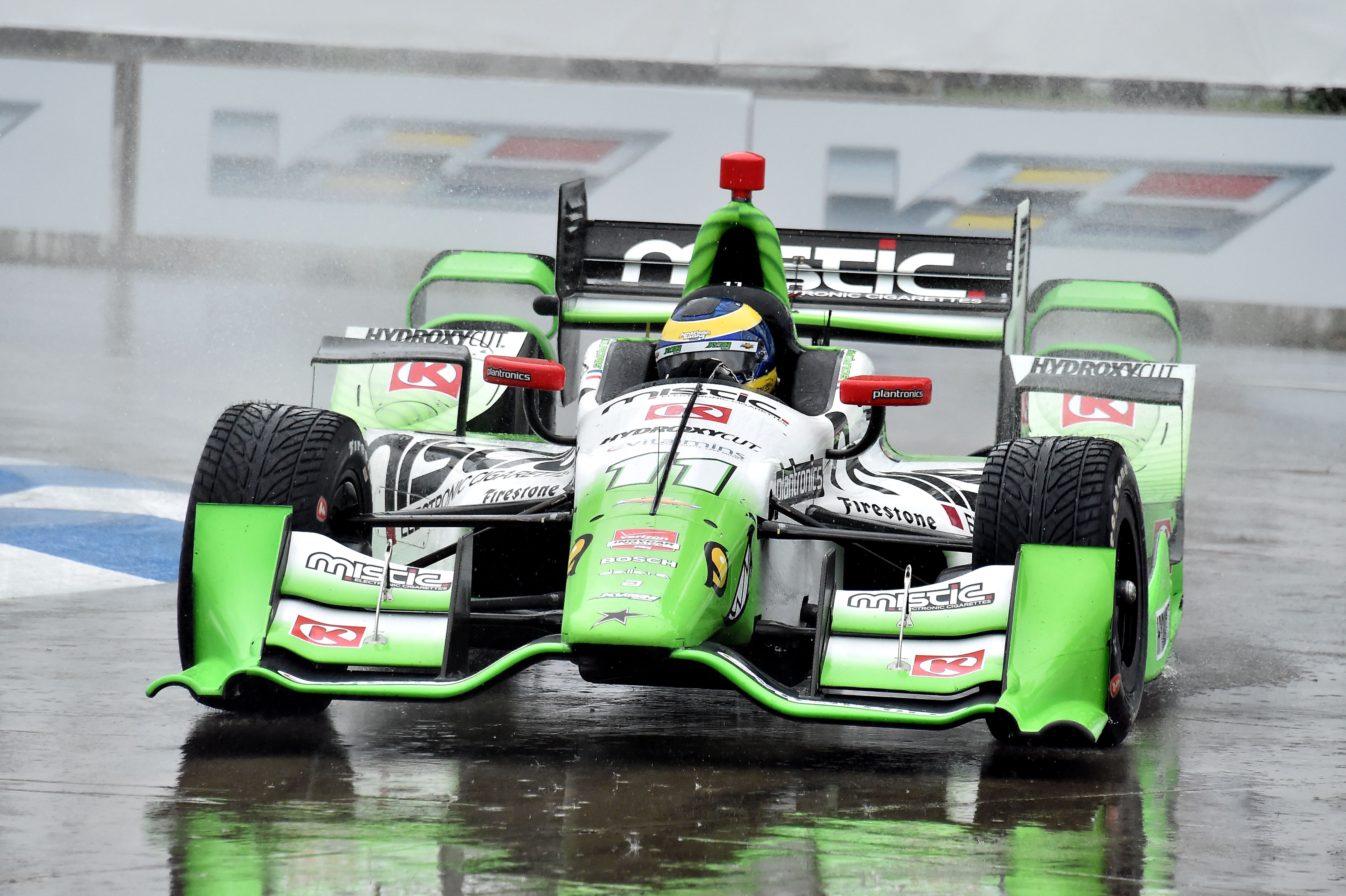 Sebastien Bourdais has taken a strategic and eventful race. The Frenchman has been lucky with multiple Caution which gave him permission to make it to the end of the race with enough fuel to win. Honda’s Sato and Rahal complete the podium. Montoya with tenth maintains his lead in the championship on a disastrous day for Penske.

The sky was rated better than this morning when it was raining hard. The drivers chose to go racing with rain tires. On a cold and wet circuit.

Will Power took the lead of the race ahead of Montoya, and Dixon was attacked by an incredible Josef Newgarden rising to third place in Turn 3. He also made a very good comeback from Carlos Muñoz ninth climbing to sixth place, ranking as the first Honda.

On lap 3, Montoya attacked Power for the lead of the race. The Colombian was immediately marked with his teammate. Behind James Jakes (Peterson Schmidt Motorsport) got the playing with dry tires.

On lap six, Carlos Muñoz (Andretti Autosport) had to abandon the race. The abandonment did not stop the race.

The rain was coming but still had a dry track circuit, no doubt, rain tires. Kanaan and Sato stopped to change tires on lap 19, opening the first round of stops. Power was the first of the leaders to stop a box, the Australian did on lap 21 in an increasingly wet track.

This was reacted to Montoya who stopped one lap later, leaving the lead momentarily, to Scott Dixon (Chip Ganassi Racing). However, Montoya kept the lead once completed the first pit stops, Power was second followed by Dixon, Newgarden and Bourdais.

On lap 27, Power suffered gearbox problems while fighting with Juan Pablo Montoya. 2014 champion stopped in box and changed tures. Unfortunately for him, down to the thirteenth place, 50 seconds behind the leader.

Honda’s best moment, Graham Rahal (Rahal Letterman Lanigan Racing) was going up positions despite a bad start. Rahal began the fight for fifth place with Castroneves. Seeing that he did not succeed at overtaking, from box they advised to save gas.

Andretti (Andretti Autosport) tumbled in the last positions of the race, decided to put dry tires on lap 37, at which Rodolfo Gonzalez (Dale Coyne Racing) crashed into the barriers of Turn 4. Causing the first caution of Race. This did not help Luca Filippi (CFH Racing) who was already in the pit lane and lost time because when there is a yellow flag the pit lane is closed. It did not help Montoya  in anything, as he saw his lead was reduced to nothing.

With the pace car on the track, all those who had not been stopped before,  did so at the time. Activity in the pit lane was frantic but helped Dixon (rain tires) and Bourdais (slicks) to overcome Montoya (slicks) and Newgarden (slicks). Rahal ahead of Castroneves. Daly, Hunter-Reay and Power had not stopped.

The green flag lap 41 again with a variety of tires. This caused accidents. Luca Filippi crashed into the wall at Turn 2 after losing control of his car. Coletti (KV Racing Technology) also crashed into the wall but in this case the curve 3. It was the second caution of the race caused by drivers on slicks.

The green flag lap 46 again, Castroneves and Rahal took advantage to beat Newgarden to climb to seventh place. Montoya tried to advance but the Frenchman Bourdais moved to Dixon rolling with rain tires. The pace was clear, the ideal tire at the time was dry. Bourdais continued his good pace to overtake Power for second place.

Newgarden on lap 50 tried to ride the soft tires but crashed in Turn 2 where his teammate Filippi had crashed earlier. The pace car appeared on track, Daly was still leading but took the opportunity to stop a box one last time. This left the race lead Sebastien Bourdais.

The green flag again with 15 laps, but an accident happening again. Which caused the yellow flag again as Karam and Coletti had their cars stopped. Karam was causing the problem, being very aggressive touching Hawksworth who made Coletti stop the car.

The action again with 13 laps to go, Power, Dixon and Castroneves advanced Andretti leading down to the twelfth position. This small group one lap later got rid of Kimball who left no room to Dixon that went straight into the wall of Turn 4.

Pace Hit the track again, Graham Rahal was warned by race direction for his blocking maneuver to Sato, this forced the US driver to stop and let the Japanese advance climbing to fourth.

Again, the green flag in the absence of 9 laps, Castroneves and Kimball had a touch that luckily did not make anyone abandon, also had a touch, again Karam and Hawksworth that caused a British spin. The yellow flag appeared again because of a touch between Power and Kimball which had left parts on the track.

With 6 laps to action again, Montoya lost two positions to be overtaken by Sato and Rahal. Worse they spent their teammates, Will Power and Helio Castroneves who played hard and had to leave the race. Power’s touch with Castroneves could have been avoided if Tristan Vautier had not touched Power, causing him to lose control of the car. This incident caused the red flag with only 6 laps to go.

With interrupted race, Montoya complained that Sato had advance before the green flag, which was not true. The results were: Bourdais, Sato, Montoya, Rahal and Pagenaud. The race was restarted with less than six minutes to complete the timeout.

Bourdais held the lead when the green flag was shown again in the absence of three minutes remaining. The Frenchman was just running out of gasoline as everyone but retained the lead. Not like Montoya, who continued to lose positions on the final lap. The winner of the Indy 500 was surpassed by Vautier, Andretti, Daly, Hawksworth, Hunter-Reay and Chaves.

Bourdais wins the first race this season, he is accompanied on the podium by both Honda Sato and Rahal. KV Racing driver wanted to do some “donuts” to celebrate the victory but he stopped the car when he did.

Montoya although the difficult weekend he’s had, extends the distance to second place in the championship to 21 points. Power for it is the only thing keeping a short distance with Montoya.

Thanks to the podium Rahal is up to fourth in the championship and sixth Bourdais. Also Marco Andretti moves up to seventh in the overall stands.