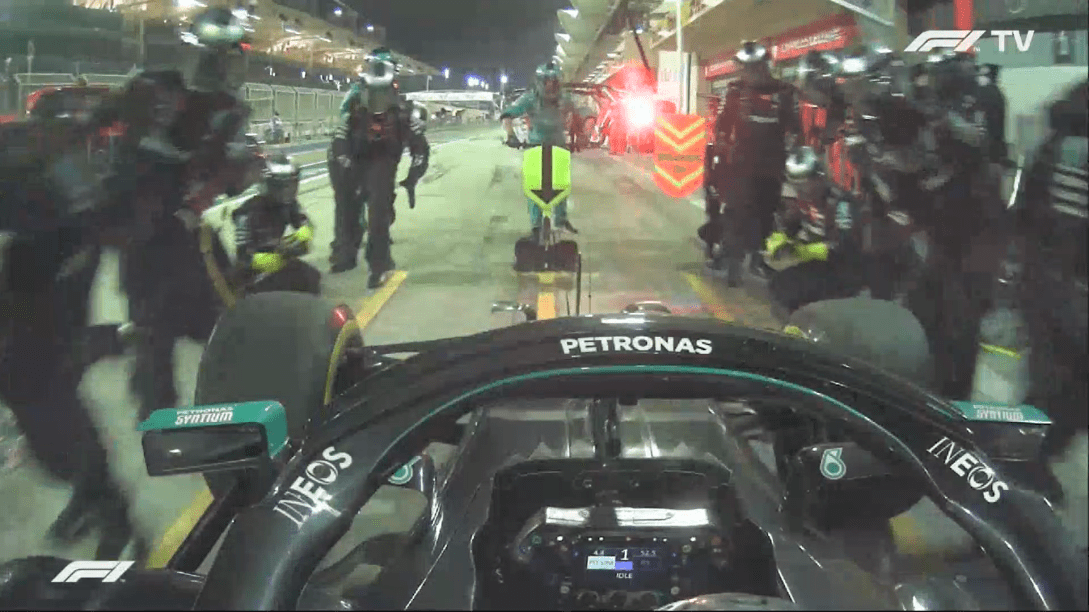 Valtteri Bottas had another disastrous F1 race in Bahrain GP as he was spotted to have changed three tyres instead of four on his final stop.

In the wake of Sunday evening’s F1 Bahrain GP, keen-eyed internet users had noticed that Mercedes’ Bottas, upon his final stop, did not switch all four of his yellow-striped medium tyres whilst pitting for a new set of the same compound for his final pit stop.

The Finn exited his pit box on Lap 39, those responsible for changing his front-right tyre having never made an attempt to change his tyre bar a perfunctory activation of the wheel gun to unscrew and re-tighten the wheel nut.

The widely-shared video clip raised questions about the legality of the stop, but it was determined that under article 24.2 of the FIA Sporting Regulations, that this was a perfectly legitimate activity due to the lack of compound variation between the two sets used.

It was this that was the differentiating factor between Sunday’s incident and that which was seen at Spa in 2015, when Bottas was forced to serve a drive-through penalty after Williams accidentally fitted one medium tyre among an incomplete set of softs to his FW37 five years ago.

In the FIA Sporting Regulations, such a procedure was not possible until 2017. The rule stated then: “Except under Article 24.1(b) and Article 24.4(e) and (f), no driver may use more than  thirteen sets of dry-weather tyres, four sets of intermediate tyres and three sets of wet-weather tyres during an Event. A set of tyres will be defined as two front and two rear  tyres of the same specification.”

However, from 2018 onward, the FIA added a new rule, where they allowed mixing of same-specification tyres post-qualifying. Here’s the changed regulation: “Except under Article 24.1(b) and Article 24.4(e), no driver may use more than thirteen sets of dry-weather tyres, four sets of intermediate tyres and three sets of wet-weather tyres during an Event.

The above ruling is still there in the 2020 regulations as well, officially clearing Bottas: “Except under Articles 24.1(b), 24.4(e) and 24.4(f), no driver may use more than thirteen sets of dry-weather tyres, four sets of intermediate tyres and three sets of wet-weather tyres during an Event. A complete set of tyres will be deemed to comprise two front and two rear tyres all of which must be of the same specification and as allocated by the FIA, however, sets of the same specification may be mixed following the qualifying practice session.”

Bottas confirmed having completed the stop in this manner and was informed as well on the radio by the team when he stopped for the final time – it is not usual for such a stop to take place as seemingly this was the first time it happened or at least caught on video. He pitted three times in all during the grand prix.

A puncture early on in his race forced him to pit and hindered his efforts, prompting a first pit stop. Two further stops ensued for the Mercedes driver, and he wound up eighth at the end of the race – in fact, he had a slow puncture on his final set too on the right-rear.

“The soft, we didn’t really find a very interesting tyre, in the race after a few laps it drops off massively and even after a few laps it would be a lot slower than the other tyres so it was never an option,” said Bottas to media. “The medium we put on at the end, we only changed three tyres and it was not that old only a few laps.

“The first 10 laps and the last 10 laps felt OK but there were some issues with some overheating. The drivers and tyres with the hard tyres could keep going quite a bit longer and still able to push harder without overheating so for me the hard tyre was better.”

Explaining how he incurred his first puncture, before he suffered another, inconsequential one at the end of the race under a safety car, Bottas said: “The first start, so I was actually slightly cautious on the clutch start, one or two percent more swallow than I was supposed to be to try to avoid wheelspin as I thought the grip was pretty low on my grid side which also felt like that on the formation lap.

“I was on the target or a bit more shallow but still had wheelspin off the line and lost momentum in the P2 side of the grid. That’s how we analysed it. The second start was actually quite decent despite quite a bit of wheelspin and I think I got a bit blocked on the initial getaway so I had to give a small lift so lost a bit of momentum but at least I could keep the position.

“Apparently I picked up the puncture between Turns 3 and 4 on the opening lap on the second start,” Bottas surmised. “For me everything looked clean, I didn’t see any debris so I was quite surprised. At the very end with the safety car period there was another puncture on the rear tyre, I think rear right, and again I didn’t see anything so obviously there was quite a bit of debris around but you can’t really see it.

“So another unlucky race for me,” summed up Bottas. The 31-year-old driver struggled in the wake of his rivals, and had difficulty navigating the field. He said the DRS trains – when numerous drivers have DRS privileges, and therefore no one has an advantage over another – were a particular challenge.

“The first stint on the hard tyre we aimed to go for one stop at that point as we knew in theory it was possible but with a lot of fighting I had to do and following and pushing to get through the cars we saw that it was not possible either if I had to sit behind them and lose chunks of time,” said Bottas.

“So it was tricky, we had to find the optimal thing to do and in the end we had to do two stops especially when we went to the medium tyre. The main issue was really in the beginning there was a big train of cars all with DRS and everyone knows it is not easy in this kind of situation, you really have to push a lot and slide around the car behind other cars to make up positions and that way you lose tyre life so it was not easy.

“I think from the beginning with all the happenings we had it was really a straightforward race in terms of no VSCs or safety cars that could help me from that side,” Bottas said in summary, as he added another disastrous F1 grand prix in his tally for 2020.

Here’s a photo which shows the front-right mechanic with no tyres: