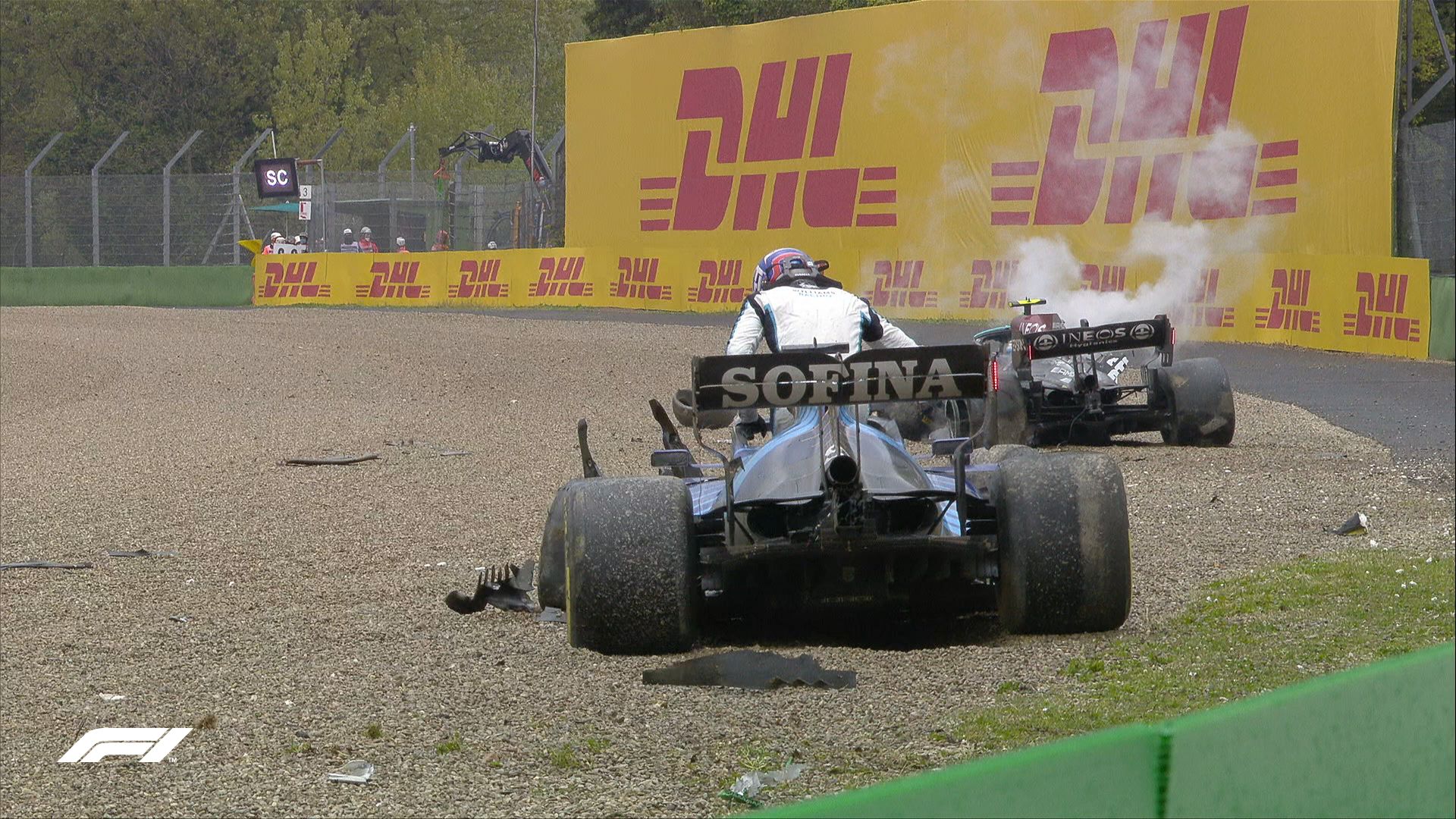 Emotions were high after the clash between Valtteri Bottas and George Russell in F1 Imola GP, as they reflected on it along with Toto Wolff.

After a bad qualifying, Mercedes’ Bottas found himself in 10th on F1 Imola GP start, with Williams’ Russell tucked behind him for most part of the grand prix. Just as the track started to dry out, the British racer pressed on to overtake the Finn.

As they went through the main straight, Bottas on the left had a slight movement to his right, while taking the left-hander, but at that speed, it put off Russell slightly. He had one moment on the grass and spun across, hitting the Finn on the side.

The two rammed onto the barrier to retire. Russell went on to Bottas, where the Finn showed him a middle finger and the Brit then brushed on his helmet. The two weren’t too happy post-race either, with the Brit reckoning, he broke gentlemen’s agreement.

Bottas felt, it wasn’t like that, as he was entitled to his line and there was space for two cars. Russell reckoned, at that speed and in those conditions, they had to be extra cautious. The incident was adjudged as a racing one, with no one wholly to be blamed.

Wolff, though, though it was 60-40 without stating it directly, who it was. He hinted it more on Russell, but the consequences is for both, eventually. A lot of the people took it on personal level, especially with Russell tipped to replace Bottas in future.

Here’s what they said post-race interviews on Sky F1:

Russell – “I was coming up on Valtteri massively fast. I had the slipstream, I had the DRS and just as I pulled out he jolted very slightly to the right. Which is a tactical defence that drivers in the past used to do. There was a Verstappen manouevre in 2015 which there is a gentlemen’s agreement that that is not what you do, because it’s incredibly dangerous. In completely dry conditions I would have been fine but he just put me onto the wet patch and I lost it. So an unfortunate incident but we’re going at 200 miles an hour, you need to respect the speed and the conditions. One of those things.

“I asked him if he was trying to kill us both. We’re going incredibly fast. We know the conditions. In his eyes he’s not really fighting for anything. A P9 for him is nothing but for us it’s everything. I’m going for the move. The move would have been absolutely easy. There’s absolutely no reason to jolt like that. There’s a gentlemen’s agreement between the drivers. We’ve always said it’s going to cause a massive collision one day and here we are.

“We’re both grown men. We’ll have a conversation and talk about it obviously let the heat die down a bit. I’m sure he’s upset and frustrated with me as I am with him. The faintest of movements when you’re travelling at 200 miles an hour is actually quite a massive thing. More so it’s not just the speed, it’s the speed difference. I was probably going 30 miles an hour quicker than him and about to overtake him and perhaps if it was another driver he wouldn’t have done that.”

Bottas – “It was quite a big one, high speed but obviously it could have been a lot worse. But yeah I’m ok. I was struggling with the dry tyres and George got close, he obviously went for the overtake in a place with pretty much only one dry line. I’ve seen the replay and there was space for two cars, so I don’t know what he was [talking] about when he was trying to say something. It was completely his fault, so it’s quite disappointing. I couldn’t hear a thing [when he came to me].”

Wolff – “It was a bad shunt. There wasn’t a lot of friendly exchanges between the two, I guess. But we need to look at it again because it takes two to tango. Maybe it’s a 60-40 but I wouldn’t know in which direction. I haven’t seen George yet – he didn’t come [to see me]. I keep teasing him, I said if he does a good job he can be in a Mercedes, if not we’re doing the Renault Clio Cup and today we’re more close to the Renault Clio Cup.”

After things settled down and the stewards hearing was done, Russell, Bottas and Wolff spoke to media – including FormulaRapida.net – in their respective session. The trio added further on their thoughts and clarified their comments made on TV.

Russell (unfortunate but both could have done it better) – “I think it was an unfortunate incident. It could have been avoided. Valtteri was defending hard and he is in every right. The track is going left and he is going straight, we can see in the TV footage, it is very clear. Like I said, he is entirely allowed to do that but with damp conditions and with one dry line, that was unfortunate. His maneuverer was within the rules and he was in every right but it could have been avoided.

“There should have been a bit more respect in such conditions. From my side, you don’t really take consideration of which car it is. At the end of the day, the move was absolutely on, it was only three quarters down the straight, and that would have been a simple, clean and clear overtaking, had it not been a little bit damp. But the track wasn’t that damp, as I said, the track was going to the left and I was squeezed to the right, where the damp was there.

Russell (reaction to Wolff’s latter comments on not fighting as much against Mercedes) – “I’ve never been in a position where I’m fighting against Mercedes and Williams has not been fighting against Mercedes in probably five years so it’s not even crossed my mind how I would fight against the Mercedes. As I said, It was not a reckless move. The move was totally on. Valtteri defended hard and it was fair to do so but we were three quarters of the way down the so-called straight, it wasn’t like I lunged him from 20 metres back and crashed into the side of him.

“An unfortunate incident that would not have happened if it wasn’t damp. It was just an unfortunate set of circumstances, which could have been avoided. Was Valtteri in the wrong? Probably not. Could he have done something slightly more? Maybe. Was I in the wrong? I caused the crash by spinning but was I wrong to go for the overtake? Absolutely not. You would have been foolish to lift at that position.”

Russell (shaken up) – “Initially I was a bit shaken up and that’s why the immediate reaction. But this goes to show how safe these cars are and I managed to come out safely. Sometimes the cameras don’t give justice of how fast these cars are. Credit to the safety team for all the work.”

Bottas (explaining the happenings) – “First thing, I couldn’t hear what Russell was saying, I had my helmet on and my engine was running, I couldn’t hear a thing. From my side, I was defending my position. I think, he had stopped two laps earlier, so he had tyres warmed already. I was doing the warm-up and I knew that, that corner is tricky to overtake, so I was just trying to make sure that I make space for him and also leave at least one car’s width of space by the regulations. He went for it and obviously lost it and it was game over. I spoke with Toto and he said, he will probably speak with him at some point. We went to stewards together and it is overall reviewed and they wanted to hear both out comments.

Bottas (post-crash pain plus not breaking any agreement) – “It was just the pain where I was pissed off because I knew I lost lot of points, and there was still an interesting race ahead and I could have scored some points. As for gentlemen’s agreement, I don’t see it that way at all. I didn’t make any sudden moves. I think it’s quite clear from his onboard as well, I always left the space. From my side, it was clean, and of course I’m defending, I’m not going to make any room for him. But also when I race, I have respect. So I see it differently than him.”

Bottas (overall feeling and notion that because it was Russell, so the move) – I think the overall feeling is that I am not the one to be blamed for that crash. Sorry, I lost my aluminium foil hat somewhere. It’s quite a theory. No, I’m always going to defend, to any driver I’m not keen to lose any positions and that was normal defending, it could have been a lot more aggressive, if needed. I don’t agree with that at all.

“I was doing my thing, no matter who I would have been defending against it would have been exactly the same. He knew exactly that it was going to be damp there because we’ve gone through lap after lap and I knew as well, and it’s just not the place to go in those conditions on slicks. But he still went there and it was his choice to go there and I was doing my job, trying to defend and I’m not going to move away and give him the dry patch of track.”

Wolff – “That’s bullshit. The whole situation is absolutely not amusing for us to be honest. It’s quite a big shunt. I am going to speak to George and make across my point. And no, there’s never such situation in life where one is 100% to blame and the other is zero. The whole situation should have never happened. Valtteri had a bad first 30 laps and shouldn’t have been there. But George should have never launched into this manoeuvre considering that the track was drying up.

“It meant taking risks and the other car is a Mercedes in front of him. And in any driver’s development for a young driver, you must never lose this global perspective. And, yeah, lots to learn for him I guess. To add further, you need to see that there is a Mercedes and it’s wet, it bears a certain risk to overtake. And the odds are against him anyway, when the trick is drying up now. I don’t want Russell to try to prove anything to us. Because one thing I can say knowing Bottas since five years, he’s not trying to prove anything.

Here’s how race panned out and stewards’ reaction