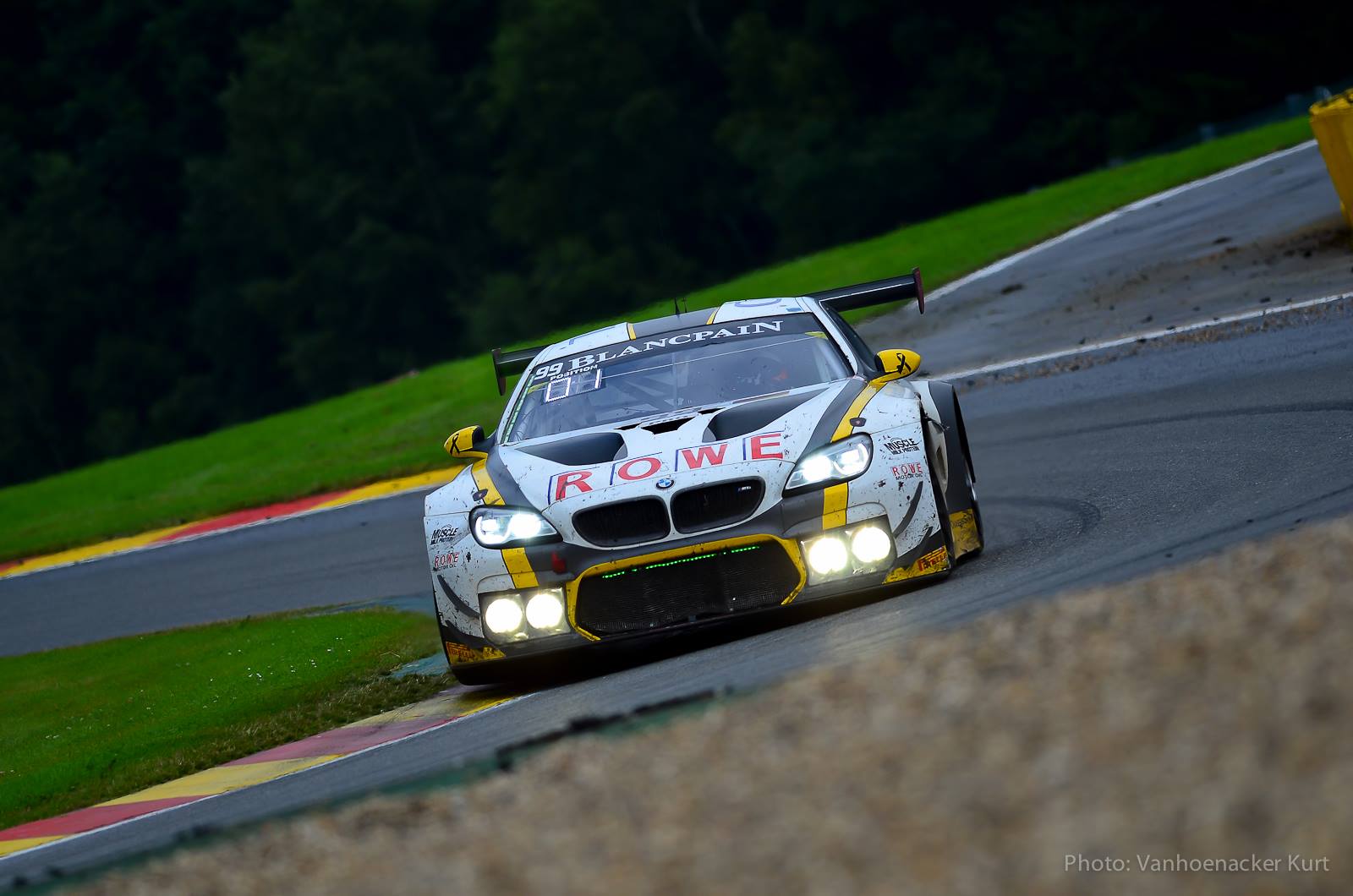 For the second year running, it was a BMW that won the highlight of the Blancpain GT Series, the Total 24 Hours of Spa. The #99 Rowe Racing BMW of Maxime Martin, Alexander Sims and Philipp Eng ran a faultless race, even resisting a sudden downpour 30 minutes from the end to take their most prestigious win of the year. The adverse weather conditions did influence the other podium positions, though: the #8 Bentley Team M-Sport Continental which ran second for much of the second half of the race, dropped to fourth in the end. A late Full Course Yellow pit stop gave the #88 AMG-Team AKKA ASP Mercedes-AMG the necessary boost to claim the runner-up spot, finishing five seconds ahead of the #28 Audi Sport Team WRT R8. It also secured victory for Mercedes-AMG in the Intercontinental GT Challenge. Pro-Am Cup honours were taken by the #76 IMSA Performance Porsche which ran a faultless race, while the #888 Kessel Racing Ferrari won the battle of the Prancing Horses in the Am Cup. In the National Group there was no stopping the #911 RMS Porsche and Audi won the Coupe du Roi for a third consecutive time.

It wasn’t long before it was clear that the 69th running of the Total 24 Hours of Spa was going to be an unpredictable, yet extremely hard-fought endurance race. During the first safety car intervention, following a two-car crash on the Kemmel Straight, several teams spread their tactics over different cars which prompted a flurry of lead changes. No fewer than seven different brands led the race at one point or another.

At the first points scoring opportunity after six hours the #99 Rowe Racing BMW lead from the #6 and #1 Audis, but the competition was not far behind. However, there was no #28 Audi Sport Team WRT R8 among them, for there had been contact between that car’s driver René Rast and the #114 Emil Frey Jaguar of Jonathan Hirschi. The Audi squad needed three laps to repair the damage to the #28 car, which recovered during the second half of the race to take third.

During the night hours the two Continental GT3s of the Bentley Team M-Sport came to the front, occupying first and third spots halfway through the race and giving them important points for the championship. In second was the #6 Audi Sport Team Phoenix R8 ahead of the #99 Rowe Racing BMW in fourth, which was still on the lead lap.

With the #7 Bentley Team M-Sport Continental GT3s losing considerable time due to power steering problems, three of those four cars continued to challenge each other for the lead throughout the morning hours. That three-way fight became a duel when the #6 Audi Sport Team Phoenix R8 went up in flames. Flailing rubber from a right rear puncture cut the oil lines of the Audi and triggered a fireball, but driver Christopher Mies escaped unharmed.

With intermittent rain hitting the Ardennes track during the closing stages of the race, the drivers of the remaining #8 Bentley and #99 BMW struggled adapting to the ever-changing conditions. Because the Bentley had to serve several drive-through penalties throughout the race, it was expected to be half a minute short at the end. The late race downpour changed the leaderboard even more, with the Bentley switching to rain tyres under green. At the same time several cars aquaplaned off at the Bus Stop chicane, instigating a Full Course Yellow-situation. The cars in third, fourth and fifth all pitted during that period, which brought them out ahead of the Bentley. It appeared the #86 AMG-Team HTP Motorsport Mercedes-AMG GT3 would inherit a podium position, but in the final minutes it was deemed the car had been released from its pit box in an unsafe manner and driver Maxi Götz was handed a drive-through penalty that demoted him to fifth. Felix Rosenqvist in the #88 AMG-Team AKKA ASP Mercedes-AMG GT3 climbed to second, and although Laurens Vanthoor in the #28 Audi Sport Team WRT R8 did his utmost to pass the Swede, the Audi-driver had to settle for third.

At the front there were no real worries for Alexander Sims in the new BMW M6 GT3, who took the win under the cheers of the Rowe Racing team and his co-drivers Philipp Eng and Maxime Martin. For Martin it was a very emotional win, for with this victory he follows in the footsteps of his father (and four times Spa-winner) Jean-Michel Martin.

In Pro-Am Cup the opening hours were just as exciting as the fight for the overall lead. There were plenty of lead changes, but at the six-hour mark the full points went in the direction of the #44 Oman Racing Team Aston Martin. The second and third Pro-Am cars, the #100 Attempto Racing Lamborghini and the #89 AKKA-ASP Mercedes-AMG GT3, finished less than fifteen seconds behind. During the night hours the drivers of the #74 ISR Audi set some impressive stints, ultimately taking the lead in the category and even entering the top-10 overall at the halfway mark. They lost their advantage on Sunday morning, however, as the #76 IMSA Performance Porsche’s more efficient pit strategy made for an impressive climb up the order that would turn into a one lap victory margin. It was the first win for French quartet Patrick Pilet, Maxime Jousse, Raymond Narac and Thierry Cornac since they started their Blancpain GT Series campaign at the beginning of the 2016 season. Porsche factory driver Pilet adds this Pro-Am Cup win to his two runner-up spots overall in 2010 and 2013, one of which he shared with Narac.

The #74 ISR Audi struggled to hold on to second for a while, but during the final hours they kept their nearest competitor, the #666 Barwell Motorsport Lamborghini Huracan GT3, at bay. For the Barwell team it was the third consecutive time they finished on the Pro-Am Cup podium in the Total 24 Hours of Spa.
Pro-Am Cup overall standings leader Michal Broniszewski had a difficult race to say the least – he was hit by another car at La Source hairpin among others – but by scoring points after six and twelve hours and taking fifth at the finish he retains his comfortable lead in the standings.

Am Cup: Reliability decides the outcome

In the Am Cup the #49 Kaspersky Motorsport Ferrari looked set to dominate the race. At the six-hour mark the white and green 458 GT3 had a clear lead before mechanical gremlins struck. After having led the class for 200 laps, the car had to be retired. That cleared the stage for an epic fight between the #888 Kessel Racing Ferrari and the #52 AF Corse Ferrari, a duel that was decided when Rino Mastronardi in the latter was hit by another car some three hours from the end. Liam Talbot, Marco Zanuttini, Vadim Gitlin and Nicola Cadei were able to evade such drama in the Kessel car, and were rewarded with the category’s most prestigious victory of the year. Together with their win at the Paul Ricard Blancpain 1000km, the trio have an almost unassailable lead in the Blancpain GT Series Endurance Cup Am standings.

For the third consecutive time Audi was awarded the Coupe du Roi. The prestigious trophy is awarded to the manufacturer that performs best in the overall, Pro-Am and Am categories. With three, two and one car scoring points in each of the respective categories, Audi ended up with 109 points, seeing off Ferrari (92) and Lamborghini (74).

The experienced driver quartet of the #911 RMS Porsche 991 GT3 Cup – Fabrice Notari, Jean-Marc Bachelier, Yannick Mallegol and Howard Blank – had little trouble in dominating their class. They quickly managed to get a couple of laps advantage over their competitors, and even though they suffered a puncture, their lead never came under pressure.

By finishing first (#88 AMG-Team AKKA ASP) and fourth (#86 AMG-Team HTP Motorsport) of the cars entered in the Intercontinental GT Challenge, Mercedes-AMG took the manufacturers’ championship lead. In the drivers’ standings Laurens Vanthoor added second place points to his third place finish at the Liqui Moly Bathurst 12 Hour, meaning the Belgian is now on top of the drivers’ standings. That means that the inaugural season of the Intercontinental GT Challenge will go down to the wire in the Sepang 12 Hours.

First place in the Am Cup went to Thierry Cornac in the #76 IMSA Performance Porsche, who beat Henry Hassid and Philippe Giauque in the #74 ISR Audi.

“It is difficult to describe. This is the seventh victory for my family at the 24 Hours of Spa and it feels amazing. I have tried to win this race a few times before and come quite close in the last few years but today was our day, or at least our weekend. It was the perfect weekend with no mistakes and no regulation breaches. For me it is quite an emotional victory; it is just amazing.”

“We had a smooth race at the beginning and seemed to make the right decisions during Full Course Yellow periods and when the weather changed. But then our luck turned and we dropped down from P3 to P5 or six. I thought more or less the podium chance was over after that. So I jumped in the car for the last two hours and treated it like a sprint race, pushing every lap like a qualifier to see where we ended up. Luckily all that craziness happened in the end, and I was also a bit lucky during my excursion at the Bus Stop in the rain.”

“After the Safety Car period I was pretty much at the end of the queue. Then, on the second lap after the green flag, I was actually braking for Turn 12 when I was hit on the rear-left by a Jaguar. I do not know what it destroyed but we got a puncture and also had to make some repairs to the car that lasted six or seven minutes. That was the point our race turned.”

“I rate this victory very highly because, honesty, when we arrived here we did not expect to be that quick and consistent. Overall we were not the quickest on track this year but also made no mistakes. The car only ever needed fuel and tyres at the stops, while my team-mates also did a great job, especially Max [Jousse] who was competing in his first 24-hour race. Thierry [Cornac] and Raymond [Narac] have more experience but they also drove very well.”

“It is a long race and you never know what will happen so cannot afford to get ahead of yourself. We were happy for the race to come to us and it did when the Kaspersky Ferrari retired.”

“Racing against faster cars is something we are used to from competing against prototypes and alike, so we had an idea of how to be careful. Sometimes it would be nice if the GT3s were a little less aggressive but I think we did reasonably well against them.”