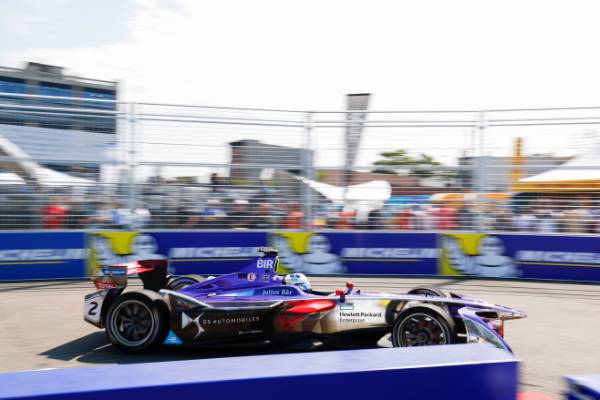 Sam Bird took the second victory in a row in New York ahead of both Mahindra drivers.

Rosenqvist took the advantage on Bird at the start. Daniel Abt (Abt Schaeffler) made contact on lap 1 stopped his car in the middle of the road but eventually takes it to the pits. The black and orange flag was handed to Vergne, having hanging bodywork needed to be repaired in the pits.

Maro Engel (Venturi), with a damaged car, was holding up the drivers behind until lap 7 when he started to drop back and a contact with the wall ended his steering column. Meanwhile, Mitch Evans (Jaguar) stopped his car trackside on lap 8 involving a full course yellow.

While Gasly was right with the top 3, the FCY made him drop back massively. On the restart lap, Bird managed to pass Rosenqvist for the lead. Lucas di Grassi (Abt Schaeffler), after a difficult quali, passed Dillmann for P6 on lap 14 before getting Oliver Turvey (Nextev Nio) on the next lap. Nicolas Prost (Renault e.dams) also had a good come back, having started from P14 and following di Grassi.

On lap 20, Alex Lynn (DS Virgin) had to stop his car on track and the second FCY was deployed on track. During that period, all the drivers except Bird and both Techeetah pitted on lap 23, the other drivers pitting one lap later just as the FCY was ending. Only Frijns stayed later.

On lap 36, Rosenqvist gets passed by Heidfeld for 2nd place. The Swede seemed to have a mechanical problem, dropping back from his teammate and being caught up by Gasly. With 3 laps to go, Da Costa hit Duval’s car, the Portuguese getting a drive through penalty for causing that collision. Rosenqvist eventually managed to get back to P2 and Gasly caught up with the Mahindra but hit the wall while going through the finish line.

Sam Bird took the second victory of the week-end ahead of Rosenqvist and Heidfeld. Gasly, di Grassi, Prost, Dillmann, Vergne, D’Ambrosio and Sarrazin completed the top 10.