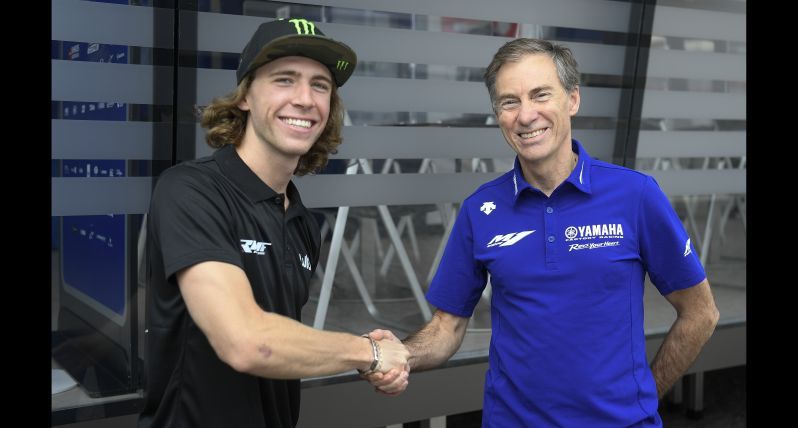 Darryn Binder jumps to MotoGP for the 2022 season with RNF Racing Ltd, as the rebranded outfit confirms partnership with Yamaha.

Having raced in Moto3 for long, Binder will jump straight to MotoGP for 2022 after signing to be Andrea Dovizioso’s teammate at the rebranded RNF Racing Ltd. The team headed by Razlan Razali has also signed a one-year deal with Yamaha for a pair of YZR-M1 bikes.

Even though it is only a one-year deal between RNF and Yamaha, they have the option to extend for 2023 and 2024. In a similar way, Binder has signed a one-year contract with the team and has the option of an extension for the 2023 season.

It is unclear from the release if it will be a pair of 2022 M1s or an older version. “We are delighted to extend our partnership with the now rebranded RNF MotoGP Team,” said Lin Jarvis. “When Razlan Razali and the Sepang Racing Team embarked on their MotoGP adventure at the end of 2018 and the start of 2019, nobody could have expected how they would take the premier class by storm.

“The impressive 2019 season and exceptional 2020 season results underline the professionalism and quality of this team that will soon be renamed RNF MotoGP Team. The core DNA of this team remains, so we are confident to continue with them as our official supported satellite team.

Moreover, Yamaha has always been clear that it wants to continue to have four bikes in total on the MotoGP grid: two bikes in the Factory Team and two bikes in the Independent team.  We will do our best to support the newly founded RNF Racing Ltd. to achieve their goals and to provide the stepping stone for future talents to enter into the world of Yamaha in MotoGP.”

At the same time Razali added: “We have today reached a historical milestone for the new RNF MotoGP Team. I would like to thank Yamaha for the trust and confidence given to me and the team for the upcoming season despite the changes that happened this year. The achievements that we have shared together in the first three years of our partnership with wins, podiums, pole positions, and awards has been memorable and motivates us towards greater heights.

“We have the experience from our past successes, supported by the same strong and passionate crew from our MotoGP garage, with a solid rider line-up, so we are set for a competitive comeback with Yamaha for the 2022 season.”

Regarding the signing of Binder, who joins his brother Brad on the MotoGP grid in 2022 – albeit on different bikes – Jarvis added: “I want to give a warm welcome to Darryn. We are delighted that he is joining the Yamaha line-up next year. We’ve had many conversations about who would be a good match for the new RNF MotoGP Team set-up.

“It’s a fresh start for the Yamaha satellite team and that makes it all the more fitting to have a young and eager rider like Darryn join them, as Fabio and Franky did before him. For Yamaha the primary mission of the satellite team is developing future MotoGP talents. Darryn has already shown on numerous occasions what he’s made of in the Moto3 class.

“We know he is a fast and determined rider who has got what it takes to battle at the front of the pack. Obviously, the step up to MotoGP is significant and will take some adjusting, but we feel that he’s ready, and Yamaha and the RNF MotoGP Team will fully support him for this new and exciting challenge.”

At the same time, Binder, who has spent seven seasons in Moto3, stated: “I’m extremely grateful for this opportunity, as it has been a lifelong dream to race in the MotoGP category. I definitely didn’t expect to make the jump straight from Moto3 to the highest class, but I do believe I’m up for the challenge, and I’m ready to put in all the hard work for 2022.

“My target at the beginning will be just to find my feet in the big class and learn as much as possible to get stronger and stronger throughout my rookie season.  I would like to say a really big ‘Thank you’ to Yamaha and the RNF MotoGP Team for everything they have done to make this possible as well as everyone who has been involved in getting me to this point. I’m now just looking forward to riding the Yamaha YZR-M1 for the first time at the end of this season.”