Even before the start to F1 Belgian GP, Red Bull were short on one car after Sergio Perez hit the barrier at Blanchimont on his reconnaissance lap. It was eventually a delayed start due to rain falling heavily at Spa-Francorchamps.

They did get going behind the safety car for a couple of formation laps, but the standing water and visibility was hugely poor for the grand prix to start. The start procedure was stopped with the red flag waved, as the cars were called into the pitlane.

While they waited for the action to begin, the FIA allowed Red Bull to fix Perez’s car and gave him a green signal to start the race from the pitlane. It was a massive delay, though, with more than three hours gone as the rain did not relent for much of the time.

After just over three hours, the race control noted about F1 Belgian GP start at 18:17 local time after rain started to relent. Even they got going behind the safety car under 1-hour time window, the visibility was pretty bad on that first lap.

It was still raining at Spa-Francorchamps and with them having done more than two laps, the FIA were able to award half a points to the Top 10 finishers, as per the regulations. They eventually did red flag the grand prix, with cars back in the pitlane.

After waiting for long to let the rain die down, it wasn’t to happen, with the race control eventually deciding to award half points as the race wasn’t to resume again. It was also a first podium for Russell and also first for Williams since 2017 Azerbaijan GP.

It was Mick Schumacher in 16th from Nikita Mazepin, who registered the fastest lap of the race, but wouldn’t be getting a point, having finished outside the Top 10. Aston Martin’s Lance Stroll was 18th from Alfa Romeo’s Kimi Raikkonen and Perez.

UPDATE: Having changed the rear wing assembly during the race stoppage, Stroll was handed a 10s time penalty. The stewards explained the reasoning, which stated: “The Stewards considered the extraordinary and unprecedented circumstances existing during this event. Exercising our authority under Articles 11.9.1 and 11.9.2.a of the FIA International Sporting Code, we note that although the assembly was changed during the period where the race was stopped (refer Doc 36), the same principles apply as for a race suspension.

“Normally however, the penalty for such a breach would be to start from the Pit Lane, however as the cars are already starting from the Pit Lane this would be a meaningless penalty. The approximate equivalent would be a Drive Through Penalty however in view of the fact that the race has been shortened, a lesser penalty of 10 seconds is imposed.”

This dropped Stroll to last behind Raikkonen and Perez. The stewards also looked into a grid incident with Leclerc, whose tyres were changed when on the grid. The team rectified their mistake within minutes, which is why the stewards did not penalise him.

“The tyres on car 16 were changed after the announcement of the delayed start,” the stewards report stated. “This is not permitted during such a delay. However the team rectified the mistake within a matter of minutes and prior to the car leaving the grid. Therefore although a breach of the regulations occurred, the Stewards impose no penalty as the breach was rectified.”

Aside the above, the FIA also explained why the race ended with just the one lap, and still half points were awarded. The final classification came with an explanation: “Results have been calculated in accordance with Article 51.14 of the FIA Formula One Sporting Regulations, namely at the end of lap 1 being the penultimate lap before the lap during which the signal to suspend the race was given.

“However, for the determination of points, Article 6.5 is applicable, the leader having crossed the Control Line 3 times, therefore complying with the requirement for the leader to have completed more than 2 laps in order for half points to be awarded.” 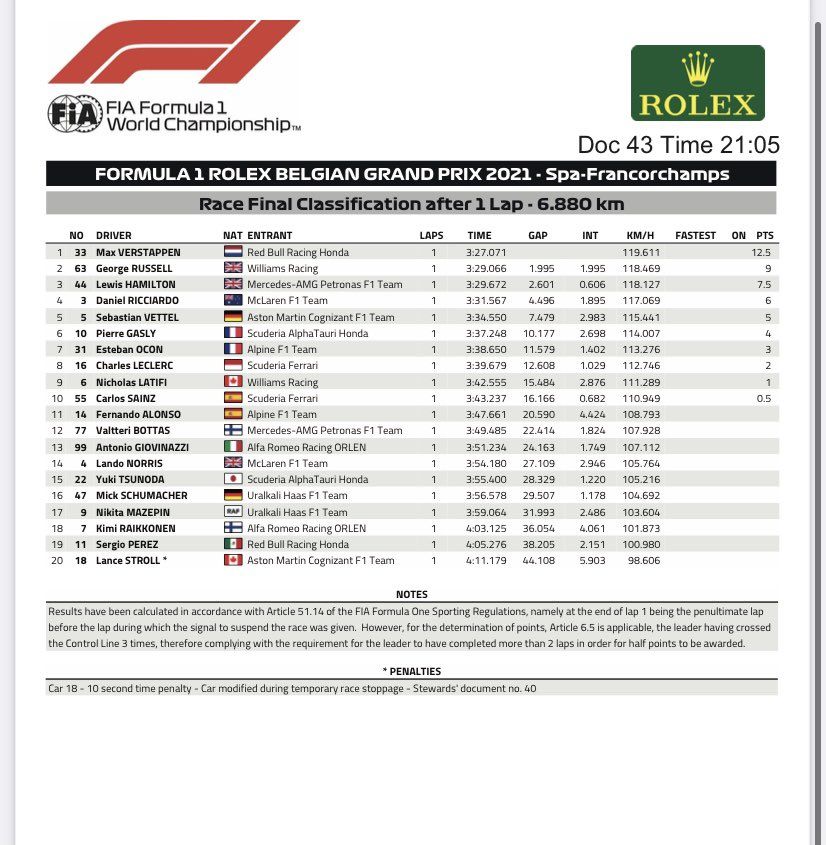