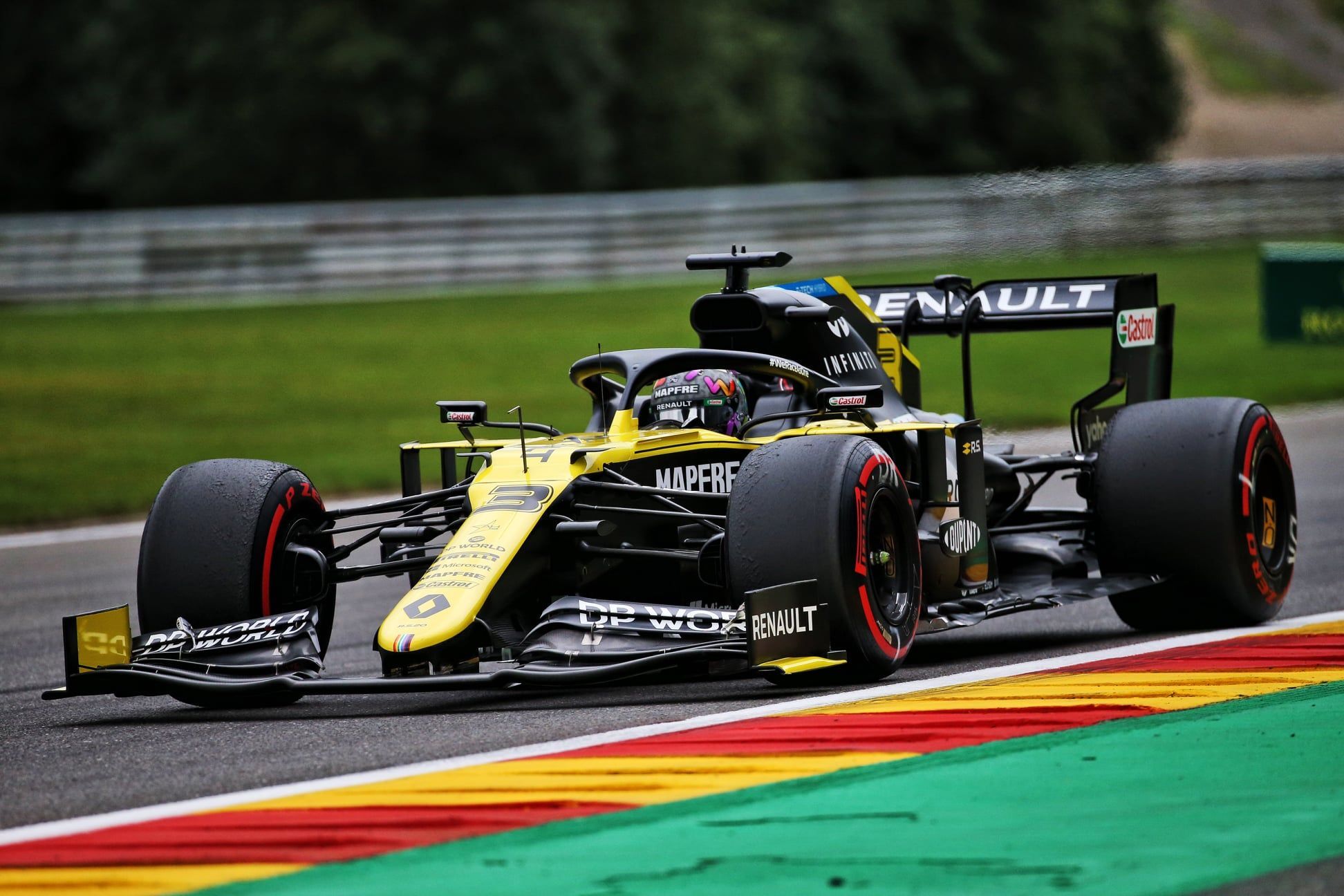 The Friday in F1 Belgian GP weekend threw some good light on how the grand prix could be as Mercedes puts Red Bull high while Renault continues it good show as Ferrari goes even further back.

Despite the still-lingering stigma around the Honda power unit, and the baseless allegation that the unit is down on power, Honda impressed on the Friday of the F1 Belgian GP weekend at a track that sees lap times decided by just that: power.

For Red Bull, Max Verstappen produced laps good enough for P3 and P1 in FP1 and FP2 respectively, the Dutchman blitzing the competition when the soft tyres were fitted to his RB16, and 19 other cars on the grid. He was satisfied with the level productivity achieved, and he looks forward to deciding the grid in qualifying session.

He added that they have struck a favorable balance between downforce and aerodynamic efficiency. “It was important to get some decent dry running, even if the conditions change over the weekend, so we can find a good baseline,” said Verstappen. “It’s never easy around Spa to find the perfect downforce level and you can see everyone trying different things, but I think we are in a reasonable place.

“The car seems to be handling well. Personally, I think Mercedes are still struggling a bit with the balance and I expect them to be stronger as you can see already that they are very competitive on the long runs and I don’t think I will be fighting them for pole because we can’t really follow when they turn it up in qualifying.”

Despite setting some good times, Verstappen doesn’t see pole for himself but reckons the F1 grand prix will be closer and that they will be ahead of Racing Point at ease. The other side of the garage with Alexander Albon, were in similar space. In fact, it seemed a much better Friday than he has had, where he is more often chasing laptimes.

The Thai racer felt good straightaway, part of it, he credited to having raced with Red Bull in 2019 as it was at Spa-Francorchamps where he made his senior F1 team debut. The positive vibes didn’t end there as rival Mercedes’ Lewis Hamilton even stated that the Austrian outfit might have the edge over his team – a bold statement given the consistent competitiveness of the German manufacturer.

The Brit, clearly made somewhat uncomfortable by the competitiveness of his adversaries, added that his team will have to analyse why they seem to have fallen back into the clutches of the rest of the chasing pack. “It’s generally been a good day – I love driving around this track, it’s incredible,” said Hamilton. “Fortunately for us it was dry which gave us plenty of time to get a lot of running in and understand the car. It’s very close out there between Red Bull and us; I think they might be a little bit quicker even at the moment.

“Racing Point are also looking strong, they’re right with us as well and so was Daniel in the Renault. It’s really close with everyone and we have to understand why – whether they’ve taken a step forwards or we’ve taken a step backwards. So we’ve definitely got some work to do overnight, dig through the data and try and dial in the car a little more. But it looks like we’ve got an exciting weekend ahead of us,” summed up Hamilton, as Valtteri Bottas added that – despite a puncture – he’s leaving Spa satisfied on his birthday.

The Finn was fine in FP1 but felt more understeer in FP2 which is why he reckons that they will have to change back to some of the settings they used in the first run for F1 qualifying. In and amongst the front-running pack, surprisingly, was Renault, whose Daniel Ricciardo once again impressed in the second practice session, after doing so in Spain and in Britain.

He has thus far been unable to covert his FP2 pace into meaningful results, and this is a goal of the Australian’s for Belgium. His FP2 lap time was good enough for P2, but his highly-performing Renault flaked out on him late in the session. The issue was later identified as one stemming from a decompression of hydraulic pressure. Ricciardo brushed this off, assuring that their programs were complete.

“It was another good FP2 as has been the case for us at the last few rounds,” said Ricciardo. “We have to do it when it counts. Friday was strong, even with the issue at the end. For safety, we pulled the car over as there’s no point taking risks with mechanical issues on Fridays. Our low fuel run was a good one. During the lap, I knew it felt good and sometimes you just know when the car’s working.

“I knew it was competitive and I wasn’t that surprised it was up there on the timesheets. It was a good day and we certainly understood a lot from it,” Ricciardo stated, as Esteban Ocon, too, observed that Renault were highly competitive, and that they show immense promise for Saturday with his new engine. The Frenchman came P7 and P8 in FP1 and FP2.

Expected to be in contention for a F1 podium after coming P4 and P5 in the morning and afternoon sessions, Racing Point’s Sergio Perez was similarly satisfied with his day as Ricciardo was. The Mexican driver is keen to unlock more potential speed in FP3 after spending today in his RP20, of which he was tremendously happy with the behavior.

Teammate Lance Stroll was equally enthusiastic after coming P5 and P11 in Friday’s running, even though the Canadian couldn’t get his qualifying run due to red flag. Over the pace of his F1 team’s rivals in Racing Point and Renault, Carlos Sainz expressed concern, as he could only muster P8 and P9 in FP1 and FP2. However, he thinks good foundations have been laid to build upon, and this he hopes he and his team can do before qualifying.

“We used both sessions to try some alternative set-ups and ideas that we had from the last race, which were interesting,” said Sainz. “We were competitive pace-wise and we seem to be in the mix for the top 10, but it’s only Friday. The Racing Points and the Renaults looked particularly quick here, so if we want to battle them this weekend we need to keep finding pace.” Coming P7 and P10, Lando Norris was confident in his McLaren’s balance, but he added that he has yet to see his team’s potential when the engines are turned up to 11.

And, while McLaren seek more speed, Ferrari struggle to get their head around where theirs white went. At no point were they considered favorites – far from it – but the extent to which they have lacked speed has come as a shock. Only managing 14th and 15th, Charles Leclerc would later call Ferrari’s extensive hardships ‘sad’, before explaining that difficulty finding a suitable balance plagued their runs.

He pledged to try his best, but warned that he doesn’t anticipate a miraculous result, while Sebastian Vettel echoed a similar message. “It was a very difficult day,” said Leclerc. “We are really struggling with the balance of the car. We tried quite a few things in the second session, including something quite aggressive in terms of downforce level but it didn’t quite work out.

“It’s probably a surprise to be so far back, but we are just lacking pace at the moment and have to work hard to catch up. But I’m not expecting any miracles this weekend. Our job as drivers is to give our best and that’s what I am trying to do. It has happened before that we have been struggling on Friday and then come up with a solution on Saturday.”

The performance disadvantage for Ferrari, was, though, AlphaTauri’s gain, as drivers Pierre Gasly and Daniil Kvyat performed unusually well. In FP1, the Russian (11th) led the Frenchman (12th), and in FP2, it was reverse where the Frenchman (10th) led the Russian (12th). Despite his good result, however, from a positional perspective, the Frenchman was left unsatisfied by the day, during which he struggled to find a good set-up.

Much like the factory F1 team, Haas had a poor day, as their cars were relegated to the garage for the morning’s running after a power unit issue – for which both Kevin Magnussen and Romain Grosjean needed a replacement. Despite the lack of running, the Frenchman stated that the car did feel good in the brief laps, even if it lacks speeds on the straights.

Surprisingly, the Ferrari-powered Alfa Romeo Racing team had a moderately successful day, bar Antonio Giovinazzi’s car going on strike for the morning, and thereby leaving him in the garage. The team appeared competitive, and Kimi Raikkonen agreed with this assessment, as did the Italian. Meanwhile, at the back, as per George Russell’s comments, Q2 is the aim for Williams, who are hoping for rain on Saturday to better their chances at a good result. Nicholas Latifi added similar things, only adding that the day was an average one for him.

Aside the regular Friday of F1, the sport also confirmed a positive COVID-19 result from the week between Friday 21st August and Thursday 27th August, where a total of 3,591 tests were conducted. This adds to the four prior positive results which includes Sergio Perez.