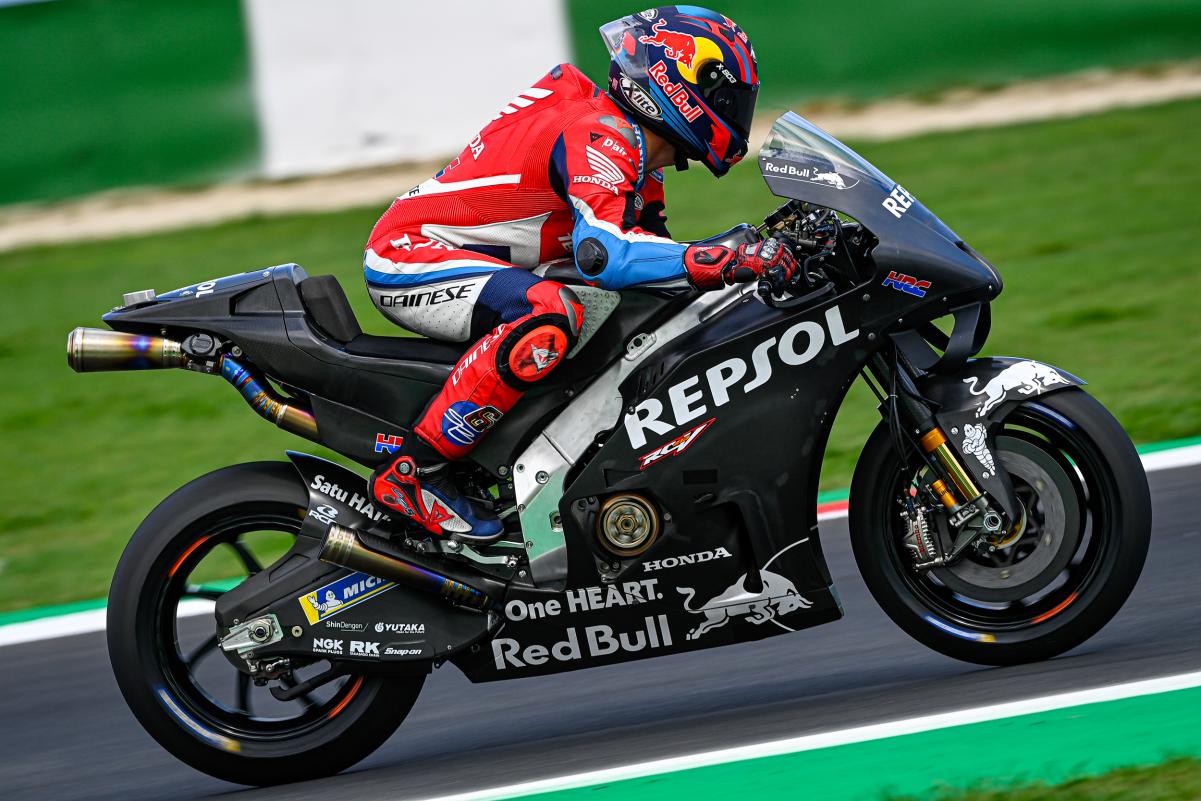 The rain on Tuesday night delayed the start to Day 1 of Misano MotoGP test, with only handful venturing out on a damp track. The afternoon session, though, saw riders have longer runs on the slick tyres to compensate for the time loss.

Ducati’s Bagnaia continued his grand prix momentum, ending up on top with a 1m31.524s lap, leading Honda’s Espargaro and LCR Honda’s Nakagami in the Top 3, as Suzuki’s Joan Mir slotted in fourth ahead of Aprilia’s Aleix Espargaro in the Top 5.

Bagnaia had a fall early in the day, but it didn’t deter him from running later on. Mir, meanwhile, test the 2022 engine. Avintia Ducati’s Luca Marini slotted in sixth ahead of Ducati’s Jack Miller as Yamaha’s Fabio Quartararo was eighth.

The Frenchman did have some laps on the Yamaha 2022 prototype, much like teammate Franco Morbidelli, who ended up 18th. The Top 10 was rounded out by Pramac Ducati’s Jorge Martin and KTM’s Brad Binder, with Petronas SRT’s Valentino Rossi in 11th.

The other KTM of Miguel Oliveira ended up 12th from the other Pramac of Johann Zarco, while Suzuki’s Alex Rins was 14th from Honda’s Marc Marquez. The latter had a go abode the 2022 spec, much like tester Stefan Bradl, who did not set a lap time at all.

Aprilia’s Maverick Vinales was 16th after he faced some sensor problems, but he had enough time to test the 2022 aero. LCR’s Alex Marquez was 17th from Morbidelli, as Petronas SRT’s Andrea Dovizioso ended up 19th from Tech 3 KTM’s Iker Lecuona.

Moto2 riders Raul Fernandez and Remy Gardner were present in the Tech 3 camp ahead of their MotoGP debut in 2022, with Danilo Petrucci slotting in 22nd behind Avintia’s Enea Bastianini. KTM’s Dani Pedrosa and Aprilia’s Lorenzo Savadori were 23rd and 24th, with Suzuki tester Sylvain Guintoli also not setting a lap time.