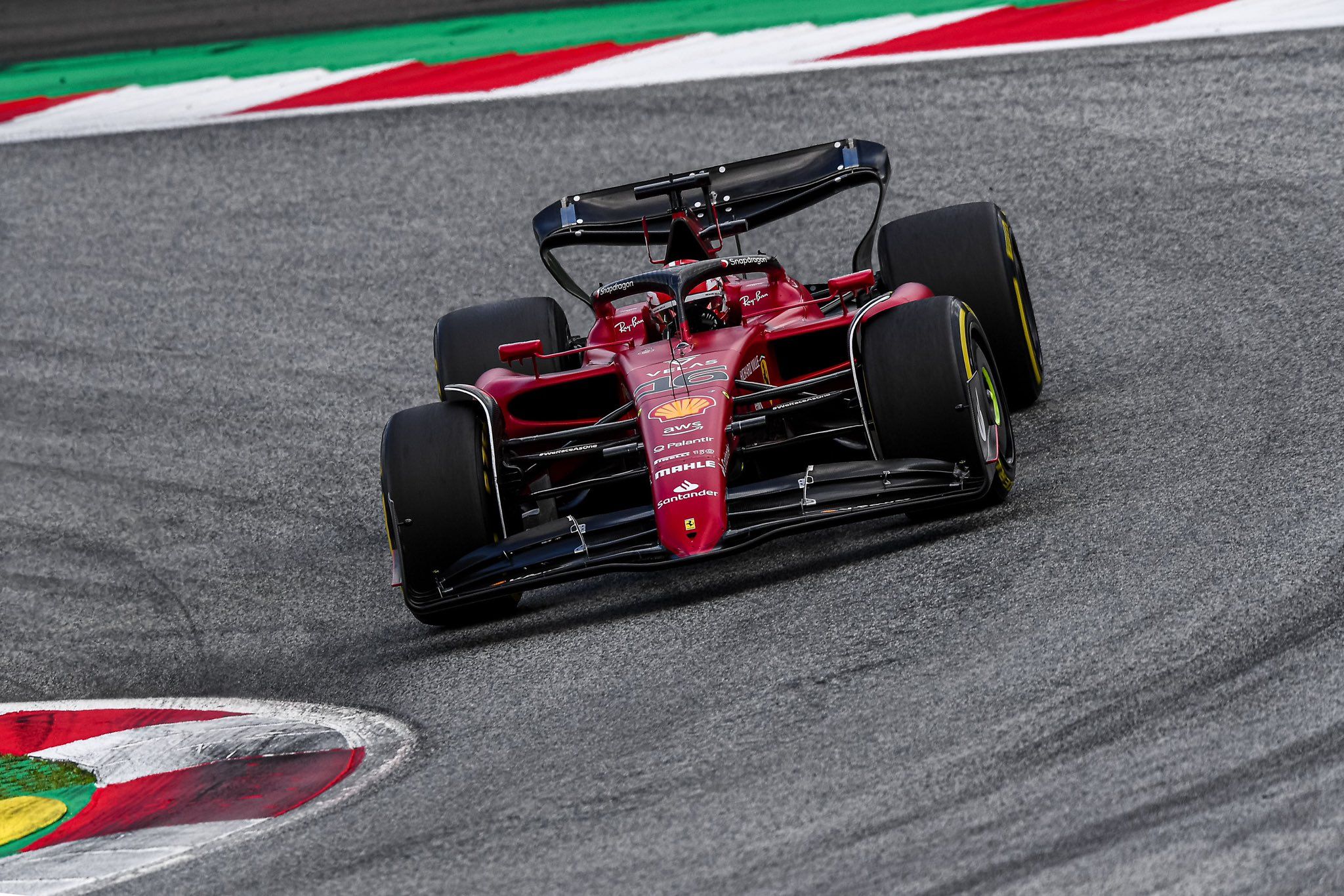 It was dry start to F1 Austrian GP at Red Bull Ring as pole-sitter Max Verstappen led the way from Ferrari’s Charles Leclerc as the trio behind them were in the battle of their own as Ferrari’s Carlos Sainz defended from Mercedes’ George Russell and Red Bull’s Sergio Perez.

It was Sainz against Russell at first where the Spaniard had a moment too but came back on him along with Perez. With the Ferrari getting his nose ahead, the Mercedes and Red Bull driver then fought against each other but it ended up in a collision.

Russell was on the inside in the right-hander as his wheels touched with Perez on the outside, which sent the Mexican onto the gravel. He dropped to the back and needed a pit stop, as the Mercedes racer was fourth then but with a 5s time penalty.

But both Schumacher and Norris got back seventh and ninth, respectively. Williams’ Alexander Albon and AlphaTauri’s Yuki Tsunoda were put under investigation for start infringement, but the stewards cleared them of any offence.

At the front, Verstappen came under pressure from Leclerc who eventually passed him for the F1 Austrian GP lead before the Dutchman pitted for the hard tyre. Sainz steadied himself in third as Hamilton moved himself up to fourth after pits for Russell and Ocon.

The Brit passed both the Haas pair in a good move and extended his first stint. Ocon, meanwhile, brought back himself ahead of the Haas pair to gain track position as teammate Fernando Alonso was in a five-way battle at one point.

It had Alfa Romeo’s Zhou Guanyu, Magnussen, Schumacher and Norris. It was tasty five-way fight for couple of corners which was eventually won by the Danish driver with the Brit bringing himself into the game to slot behind him.

But Schumacher came through soon to take track position as Alonso and Guanyu pitted to drop out. With Leclerc and Sainz pitting about 12 laps later than Verstappen, the Dutchman was back in the F1 Austrian GP lead from the Ferrari pair.

His teammate Perez was forced to retire, which put Hamilton in fourth as he passed Ocon to gain track position despite a slow stop. Magnussen was sixth from Schumacher with Norris eighth, Russell ninth and Ricciardo in 10th in a recovery drive.

Amid all this, Leclerc started to catch Verstappen and eventually passed him to retake the F1 Austrian GP lead where the Dutchman did not fight as much. He pitted for the second time when Sainz closed in on him in the fight for second.

With Verstappen pitting, it became apparent that his fight was against Hamilton behind. At the fag end of the field, Aston Martin’s Sebastian Vettel and AlphaTauri’s Pierre Gasly came together where the German on the outside was spun onto the gravel at the right-hander.

Gasly was handed a 5s penalty for causing a collision which went with his track limits penalty which handed to multiple drivers before him. There were lots of warnings and black and white flag which was a common scene in F2 and F3 races as well.

The Ferrari duo went for their pit stops and came out behind Verstappen. But it wasn’t long for Leclerc to catch and re-pass the Dutchman to retake the F1 Austrian GP lead. Sainz started to catch him as well, but his engine blew up before he could pass him.

The car caught fire as the things started to smash from the sidepod. With the car not stopping, Sainz got into a mess amid fire raging before eventually getting out of it. The Virtual Safety Car was deployed with Leclerc and Verstappen pitting.

The two maintained the Top 2 position with Hamilton at a distant in third, as Russell clawed his way back up to fourth after his penalty and front wing change. Ocon steadied in fifth from Schumacher who passed his teammate Magnussen on the track.

The Dane lost to Norris for seventh with Ricciardo in a good ninth, as Bottas climbed back up to 10th from pitlane after passing Williams’ Alexander Albon with Alonso on his tail soon. At the front, things got a bit tensed with a throttle issue for Leclerc.

They were back and forth on the radio but Leclerc eventually got the F1 Austrian GP win with Verstappen in second from Hamilton in the Top 3. Russell was fourth from Ocon with Schumacher in sixth from Norris, Magnussen and Ricciardo.

Alonso passed both Albon and Bottas to end up 10th and take the final point, but is under investigation. The Finn ended up 11th from the Thai, with Stroll 13th, Guanyu 15th, Vettel 16th, Gasly 17th and Tsunoda 18th – everyone from Schumacher to Tsunoda ended up a lap down to the leaders.

UPDATE: Post-race, the pit stop of Alonso was thoroughly checked after an apparent lose wheel situation. The drivers reported of some vibration but nothing in the video and data suggested of an unsafe release from the pit crew at Alpine.

The car and parts were checked after the grand prix too by the FIA delegate and nothing suspicious was found which is why the stewards had no further action against him, as he retained 10th after starting from last.

“Alonso made a pit stop at 16:12 during the VSC due to the incident at turn 4,” the report started. “The left front wheel subsequently came loose by a small margin and the Stewards investigated to see if the car was “released in an unsafe condition” which is a potential breach of Article 34.14 of the FIA Formula One Sporting Regulations.

“The team manager reported that the mechanic fitting the wheel reported that everything felt normal, and indeed his body language on the video appears completely normal. Nothing appears to be wrong until just before turn 3, where the wheel slightly disengages from the car, by a very small amount.

“After entering the pit lane, the driver stated “check left front.” In the hearing he stated that it felt worse when he turned to the right than when he turned to the left, but that there was still nothing obvious from his vantage point. After the race, the left front wheel with the tyre and the axel were inspected by the Technical Delegate and the Head of Single Seater Technical Affairs.

“They reported to the Stewards that the damage to the wheel and axel is consistent with a parts failure in all likelihood subsequent to the exit of the car from the pits. Based on the footage of the car from the moment the wheel was fitted, until the failure became apparent, the Stewards conclude that the wheel was fully fitted, and that subsequent to the failure, all the retention systems worked as designed. The Stewards therefore conclude that the car was not released in an unsafe condition and take no further action.”

In another summon, the Top 3 drivers were all asked to appear after it was seen that the physio/drivers’ assistants made their way into the parc ferme which the drivers have been reminded multiple times to not let it happen. This is why Verstappen, Leclerc and Hamilton were handed a suspended fine of €10,000.

“The Stewards received a report from the Media Delegate, which was subsequently confirmed by video evidence, that the physio / drivers’ assistants of the top three finishers entered parc ferme without permission and in violation of the procedure that was published prior to the race “for the orderly conduct of the event.”

“In part this is to prevent handing over of items to the drivers prior to them being weighed. The Competitor is fined €10,000, which will be suspended for the remainder of the season pending any further violation of the procedure, and the competitors are warned that the passes of the individuals concerned may be revoked in case of systemic violation,” stated the report.