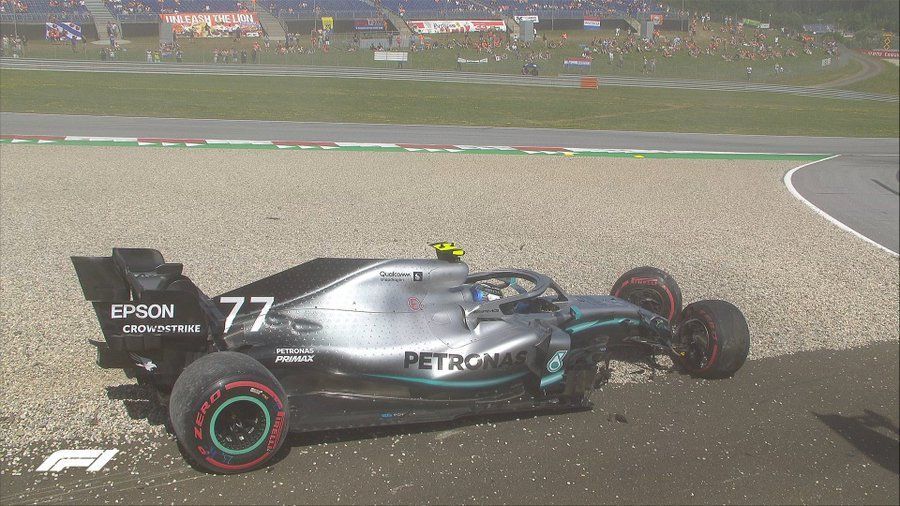 While Mercedes seemed in control still, the F1 Austrian GP weekend at Red Bull Ring started with lots of kerbs talk after multiple broken wings as track limits abuse got drivers into big trouble, even though it happened through the sauage kerbs.

The drivers were forced to take extra care and not soak in too much kerb at selected corners. While Renault’s Nico Hulkenberg paid the price for it, the crashes for Bottas and Verstappen were more because of the wind change than due to the kerbs.

Verstappen crashed at Turn 10 in FP2 with Bottas at Turn 6 – with the duo acknowledging their mistakes. “It was pretty big hit for me in second practice but I’m all okay with no pain,” said Bottas. “There were some gusts out there this afternoon.

“I think I managed to find one of them – the corners here are very tricky and very penalising if you make even a small error. But I must say I prefer this kind of circuit which penalises mistakes – it’s how I like it and it makes it even more exciting.

“Before the shunt, I had an issue with the engine this morning which meant we swapped to the old one for FP1. That compromised me a little bit but we found a clear direction on car set-up. We made some pretty big changes for FP2 and it felt a lot better until the accident.

“So overall, a good feeling on the car performance but other teams are quick as well. It’s going to be very hot this weekend, especially on Sunday, and will put the cars to the limit in terms of cooling the brakes and the engine.”

At the same time, Verstappen said: “I was happy in the car. But I was already complaining all my laps about the wind being really tricky. In some places, I was just losing the rear. I got into that corner and suddenly, you can see in the data, the rear turned around, so that definitely didn’t help.

“This year, the cars in general are more sensitive to the wind, as you can see as well with Valtteri, at one point, he just lost it. Crashes can happen unfortunately, but maybe it’s a good thing because they’ll take the whole car apart so a few new parts on it.”

Aside the crashes, both Mercedes and Red Bull had a good day with Lewis Hamilton and Pierre Gasly feeling good – even though the former admitted to getting few wing damaged. The British also felt that Ferrari looked stronger but only time will tell if its the case.

Charles Leclerc did head FP2 but the Monegasque was wary of Mercedes pace still and put them in front only. At the same time, Sebastian Vettel had a similar tune as the German was thankful that he was able to save the car in the end from a spin at Turn 10.

“My off-track excursion didn’t have a big effect on our programme, other than that we couldn’t do the long run on the softs,” said Vettel. “I was able to stop in time and did not damage the car. We are still trying a lot of things and getting closer.

“It was a bit tricky in the afternoon with the windy conditions. We didn’t actually try new updates, we ran the same parts as last weekend to be able to learn more about them and I think it was successful. Now we need time to understand what to address next.

“Our balance in the corners is not bad, we can still improve the car and we tried a few things in the afternoon. Maybe the track layout helps us a bit, but this remains a tricky track where it is crucial to have a good feeling in the car and that’s what we have to work on now.”

Aside the Top 3 F1 teams, McLaren looked the strongest in the midfield but they have Carlos Sainz with an engine penalty. It will certainly put Lando Norris in the better seat as he can do his own race on Sunday, while Sainz fights his way through.

At the same time, their direct competitor Renault did not have a great time with both Hulkenberg and Daniel Ricciardo perplexed about the lack of pace. “It was difficult for us out there, especially with our pace where we struggled to match others around us.

“As the track improved, we couldn’t seem to improve with it. We have a bit of homework to do tonight. Both cars were off the pace, so we’ll try and figure it out and find a solution together. The wind did seem to affect a lot of people.

“It certainly affected the car and it was tricky out there. We’ll look into everything and see what we can improve,” summed up Ricciardo. If Renault doesn’t make it into the Top 10 in F1 qualifying, Alfa Romeo Racing seems like ready to step it up with Haas and Racing Point on heels too.

Both Kimi Raikkonen and Antonio Giovinazzi felt comfortable with the car along with the Haas duo Romain Grosjean and Kevin Magnussen – the latter two were particularly happy after the troubles they have had in the last few F1 grand prix races.

For Racing Point, Sergio Perez felt better but Lance Stroll did not have fun. Over at Toro Rosso, Daniil Kvyat admitted to not feeling comfortable so far with the car as Alexander Albon focused more on the longer runs with the penalty.