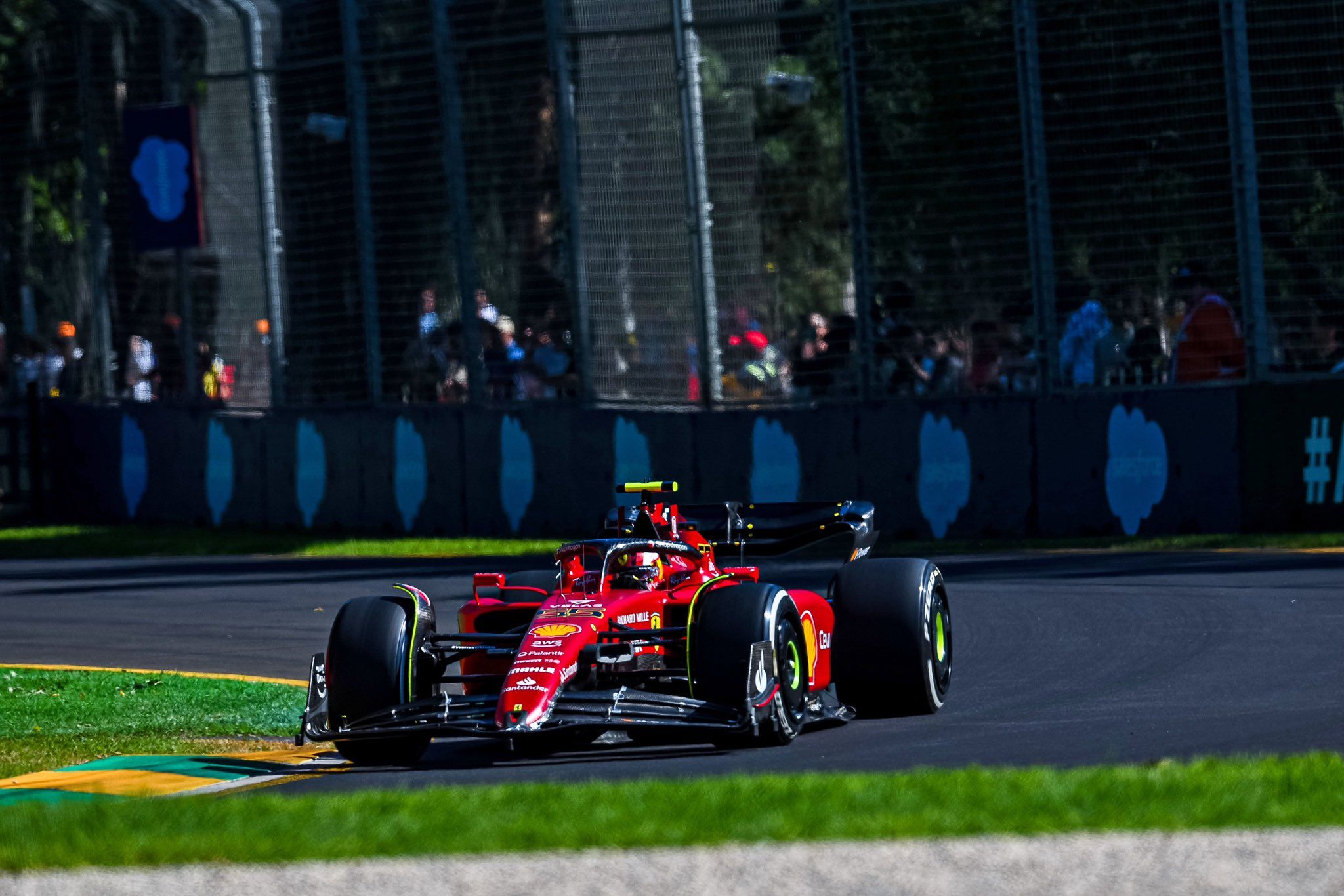 Ferrari led the way in FP1 of returning Australian GP with Carlos Sainz ahead of Charles Leclerc as Red Bull’s Sergio Perez was third.

The FP1 session in the re-profiled Albert Park circuit saw multiple red flag disruptions for the returning F1 Australian GP. The first one was to clear debris which fell from the right-rear of Sergio Perez’s Red Bull on the main straight and the racing line.

The second one was for Aston Martin’s Sebastian Vettel whose engine gave up towards the end of the session. Having missed the first two races due to COVID-19, the German didn’t have a best of starts at least on the reliability side of the things.

On the standings side, Ferrari ended up 1-2 in FP1 of Australian GP with Sainz (1m19.806s) ahead of Leclerc (1m20.377s) by over half a second. Both of them had their moments, with the Spaniard actually brushing with the wall late in the day.

He is also under investigation for impeding Alfa Romeo’s Guanyu Zhou, while Leclerc had multiple moments in the session. First one was during his pitlane practice start at Turn 1, while the another one came after the chequered flag was waved in a right-hander.

The Red Bull pair slotted in third and fourth, with Perez (1m20.399s) edging out teammate Max Verstappen (1m20.626s) after a late improvement. They led McLaren’s Lando Norris (1m20.878s), with the team showing good pace for the first time this year.

The Spaniard was caught out in the right-hander to cause brief yellow flag. Alfa Romeo’s Valtteri Bottas (1m21.247s) rounded out the Top 10, with AlphaTauri’s Yuki Tsunoda 11th from the second Mercedes of George Russell.

Aston Martin’s Vettel ended up 13th despite not finishing the session. He even had a self scooter ride back after the chequered flag, much to he delight of the fans. AlphaTauri’s Pierre Gasly was 14th after his own mini off moment at the start of the session.

Alfa Romeo’s Zhou was 15th from Aston Martin’s Lance Stroll, with Williams’ Alexander Albon 17th from Haas’ Kevin Magnussen, Williams’ Nicholas Latifi and Haas’ Mick Schumacher, where the Dane and the Canadian are also under investigation for impeding.

For the German, his fast lap was disrupted due to the second red flag, while his teammate completed the session despite falling unwell on Thursday evening with nausea. He missed the scheduled press conference prior to the FP1 session.

UPDATE: For the impeding decisions, Stroll was let off with no further action, while Sainz was reprimanded for his impeding of Zhou. For the former, the stewards noted that Magnussen was on a double push lap which is what caused the confusion.

Stroll was alerted about Magnussen and he moved out in the first instance. Since the teams cannot predict of a rival is on a double push lap situation, which is what happened in Stroll’s impeding, the stewards decided not to punish the Canadian.

For the second incident, Sainz admitted issues on track and low radio volume which caught him out in the impeding of Zhou. “Car 55 was on his first lap of the session, having been delayed starting the session. Car 24 was on a push lap. SAI admitted that because of his issues getting onto the track that he was distracted and still getting adapted to the track.

“Additionally, there was a problem with his radio volume, which was also noted by the Stewards in their review, that prevented him from hearing calls from his team about ZHO’s approach. SAI took evasive action as soon as he saw ZHO, but it was too late to avoid impeding him as SAI himself acknowledged,” summed up report from stewards.

UPDATE 2: The investigation into Vettel’s scooter ride, it resulted in a fine of 5000 euros. The German asked the marshal if he can ride on the scooter, but he left on his own without the marshal on his back. He breached the Sporting Regulations which is why stewards fined him for the offence.

“When he didn’t get on, VET departed alone for the pit, without the prior approval to do so. Meanwhile, the marshal was trying to contact Race Control for instructions. In driving on the track to his pit, instead of the designated route, VET breached Article 26.7 of the Formula One Sporting Regulations, which prohibits anyone from being on the track in the five-minute period after the end of a session, with the exception of specifically identified personnel, which makes no provision for drivers to have such access unless specifically authorized,” summed up the report.