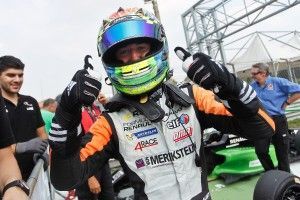 After topping every timesheet – both free practice sessions and both qualifying sessions – leading up to the race, Aubry looked favourite to win, but it was not straightforward. The margin between the Frenchman and British teammate Fewtrell on the grid was just 0.035s, and the two battled hard in the early laps of the race, swapping positions on several occasions and providing great entertainment.

After a mid-race safety car – called after Jean-Baptiste Simmenauer ended upside down following contact with Théo Coicaud at the second chicane – the two Tech1 drivers pushed hard. They pulled away from Mirecki, who lost some time at the restart, and crossed the line 0.6156 apart after 25 minutes. Aubry continued his perfect streak by claiming the race’s fastest lap – 1:51.038 – just a few thousands faster than his teammate’s best.

Mirecki drove superbly to earn his podium from third on the grid. After first-turn contact eliminated Thomas Maxwell and Charles Milesi behind him, the Polish driver had a small gap and drove sensibly to stay in touch with the leaders. At the restart he found himself under pressure from first R-Ace’s Gilles Magnus – who set a string of fast laps in pursuit of the leaders – and then Sun Yue Yang. Both got close to the green car, but neither could pass, and Mirecki held on to the line.

Magnus and Yue Yang fought hard over fourth, but it was the Chinese driver in the JD Motorsport car who held on to the position at the line. Rounding out the top six, despite missing all of Friday, was Thomas Neubauer.

Behind him was Burdett Motorsport’s Julia Pankiewicz. Her race was thrilling, battling hard with Fortec’s Frank Bird and Coicaud of R-Ace GP, the three often running side-by-side. Both Bird and Coicaud were penalised – Bird for track limits, and Coicaud for weaving at the start – and thus Pankiewicz was classified seventh.

Eighth was Chia Wing Hoong, with Bird and Coicaud behind him in the results. Simmenauer, Maxwell and Milesi were all non-finishers after their various incidents, while Presley Martono was eliminated after sliding into the Parabolica gravel trap. Michael Benyahia’s race ended in the pitlane with mechanical difficulty.

Tomorrow’s second race will take place at 12:10, with Aubry once more starting from pole position. His time – 1:50.056 – edged Magnus for the top of the times. Fewtrell starts third, and Yue Yang fourth.