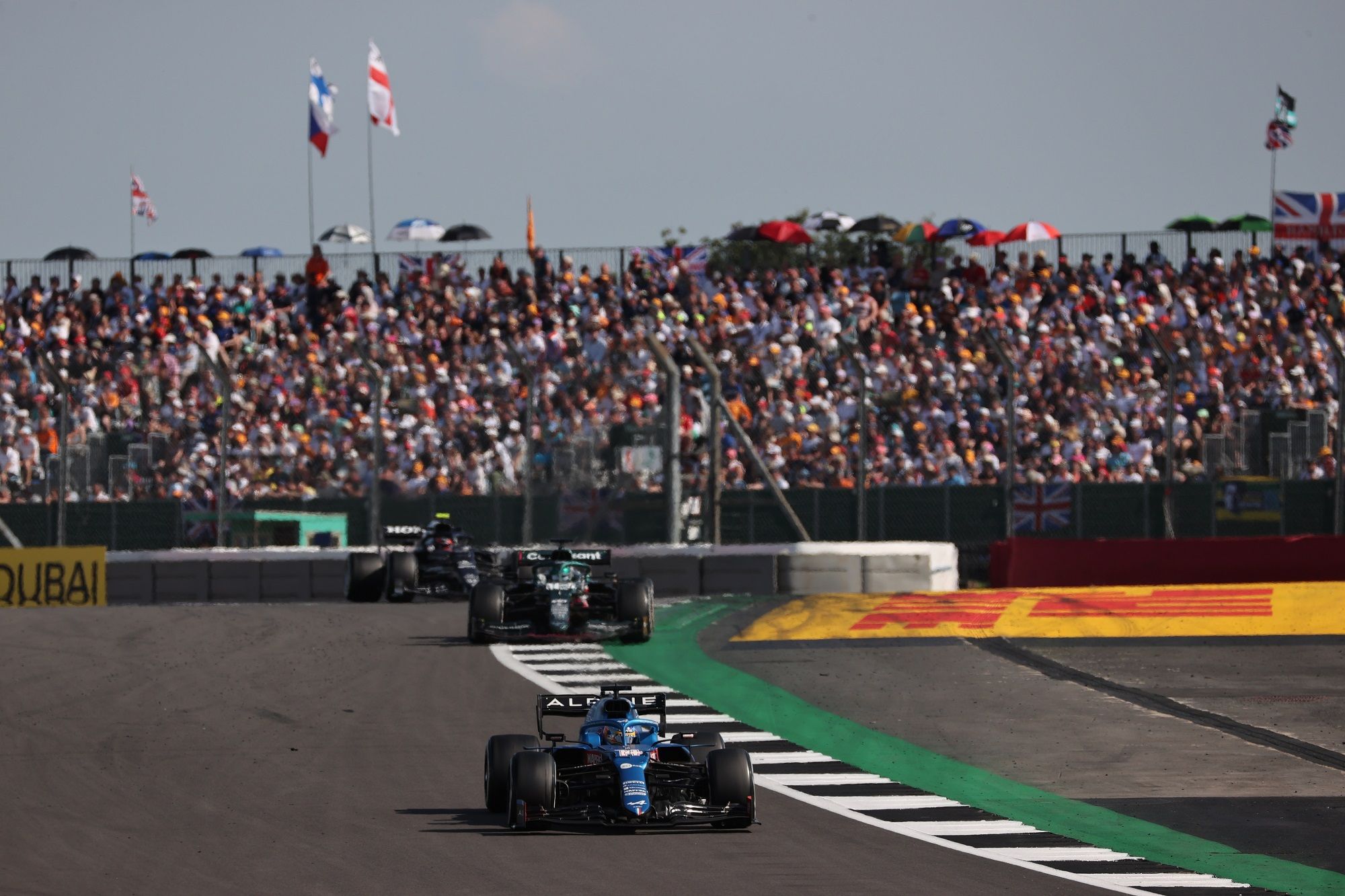 Fernando Alonso revealed of damage to his Alpine in F1 British GP, but not affecting his performance too much, as Esteban Ocon was relieved to back in points.

For Alpine’s Alonso, it was a spirited drive to seventh in F1 British GP after an excellent race in Sprint Qualifying. However, it was not totally plain sailing. At the start, his diffuser got damaged after a pre-race spin and then also on the opening lap, he had a minor brush with McLaren’s Daniel Ricciardo at Turn 4, where he lost his front wing endplate.

Fortunately, the damage didn’t cost him much performance. “The diffuser issue was not affecting too much,” said Alonso to written media. “The car felt good on the race. I had very, very small damage, that it was not affecting at all the balance.

“Then, I think we touched with Daniel in Turn 4, the endplate of the front wing, and that was, losing a little bit as well, but nothing that really affect the position or the performance, or the balance of the car. So, was lucky in that aspect,” summed up Alonso.

The good result was possible after Alpine managed to gain places in both Sprint Qualifying and the main F1 race. “It was good and enjoyable,” said Alonso. “The new format gave us the possibility to improve a little bit our quali position from Friday. It was a better race in a better group of cars. We could manage the position a little bit easier.

“We had double points for the team too. So, happy for that, I think it’s the fifth consecutive race on the points. The best one was Baku. But it was a different race with a restart at the end. So, this was the best race so far, probably, of the year. Seventh was on merit, not on luck or safety or restart. So happy with the performance are happy with the car,” summed up Alonso.

But it was not plain sailing for Alonso, as he had the Aston Martin duo in his mirrors mostly in both the races. Already Sebastian Vettel was the bane of his life in qualifying two weeks ago and this time he filled his mirrors in the Saturday race, while on Sunday it was Lance Stroll for a whole lot more – although he managed to keep them off successfully.

“I had a good training against them in Saturday’s race,” said Alonso. “I had 17 laps [having] behind Vettel. And I had 52 (having) behind Lance then. I had a lot of green colour in my mirrors for two races. But we kept them behind. So it was a good weekend with good fights. It was better in Sprint Qualifying.

“The main race was a little bit more boring in terms of fights, because we were too slow to compete with the top six. But we were a little bit faster than the guys that we had behind. We just control the pace and the tyre management. But I think we had more pace in hand, that we didn’t use it, but it was not needed,” summed up Alonso.

For Ocon, meanwhile, it’s been a quiet few races. Having had four races in a row where he scored points, he then went four more without scoring.  Two retirements and two 14th place finishes. Going into Silverstone, he was a man looking for a decent result, almost in urgent need of one after his opening lap retirement at the Red Bull Ring.

An average qualifying saw him 13th but like Alonso, he shone in the Sprint race taking 10th and starting ninth after George Russell’s penalty. It was probably helped in no small way by a new chassis and some new parts to boot. A ninth place finish brought him much relief after his lean spell.

“It was not an easy race with everything going on; the red flag, two standing starts, but we’re back in the points and that feels good,” said Ocon. “It was nice to be fighting and getting the maximum from the car. Tyre management was challenging today but we did everything well. Of course, you always want more, but as a team, we have both cars in the points and that’s a great reward for everyone’s hard work.”

The double points finish was really was what the team needed, especially on Ocon side, going into Hungary and the summer break. Confidence attained for more strong upper midfield running for the remaining 11 Grands Prix.