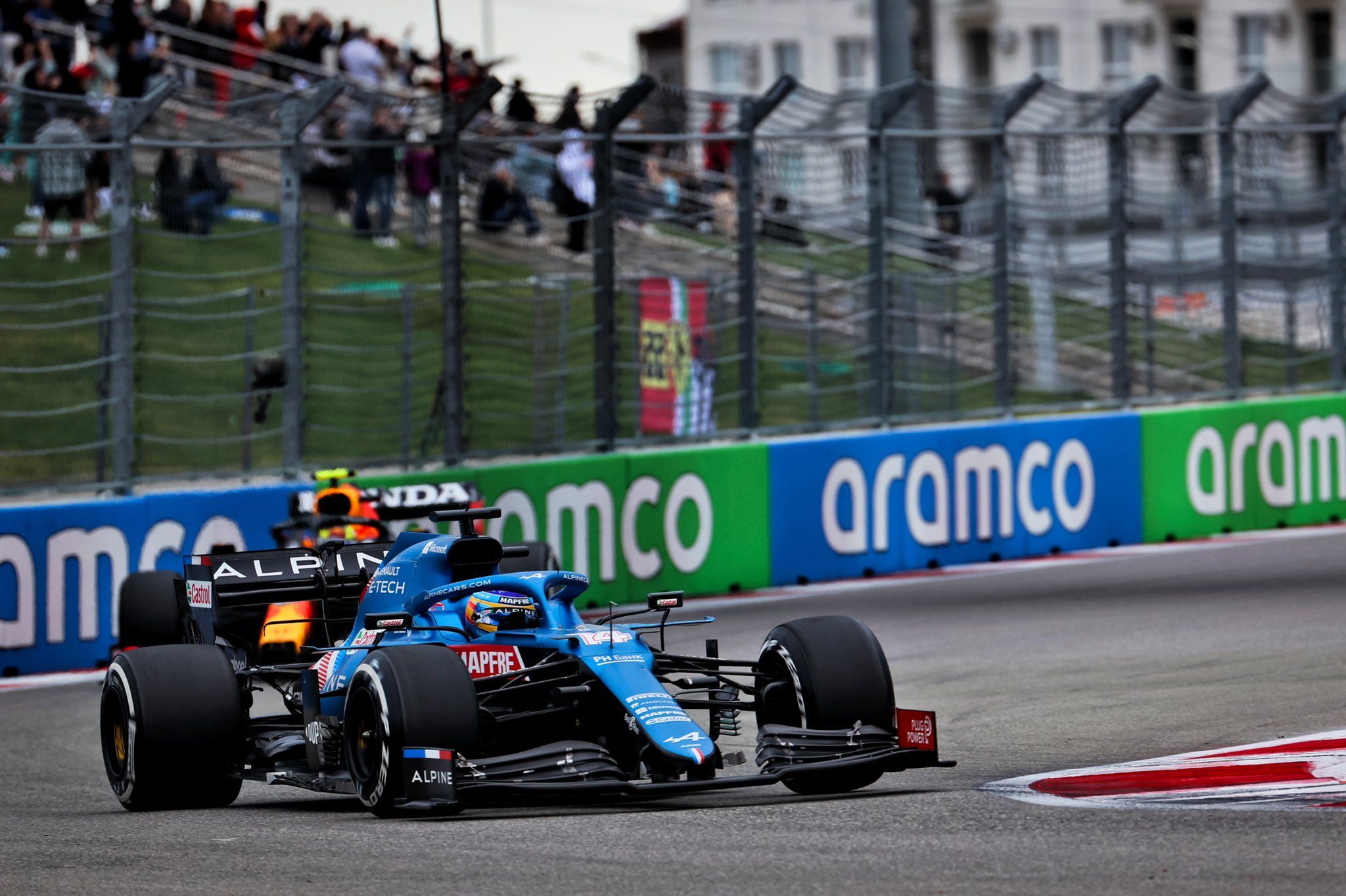 Fernando Alonso reflects on ‘ultra competitive’ F1 Russian GP for him and Alpine, where he reckons they were on-course for a podium on merit.

Alpine’s Alonso had one of his best weekends this season at the F1 Russian GP. Great pace, good balance, and adequate tyre management from the Spaniard and his Alpine A521 made them very competitive during the race which was tricky indeed.

Unluckily for Alonso, the rain in the final five laps seemingly cost him a podium position, but the Spaniard was still very proud of the team and his performance. Throughout the race he gained positions and passed McLaren’s Daniel Ricciardo, Red Bull’s Max Verstappen and Sergio Perez, as well as Ferrari’s Carlos Sainz Jr.

He was able to manage his tyres in the first stint and keep up with Perez, then in his second stint managed to overtake and pull away from Verstappen on the medium compound when the Dutchman started to struggle. Later on, also moved past Ricciardo, Perez and Sainz, which bumped him up into P3 and a potential podium finish.

Unfortunately for the Spaniard, the rain intensity had increased and with his slick tyres and the subsequent tyre change did not do him well as he dropped to a P6 finish. “It was a good race obviously for us,” said Alonso to written media. “The best race of the year I have to say in terms of performance. The car felt very fast, a good balance throughout the race.

“We were keeping up the pace with Checo in the first stint. Then we switched to the medium tyre, and we were able to even overtake Verstappen at one point and pull away from him. Then it started a little bit drizzling on dry tyres and we overtook Daniel, Checo and Sainz and we were P3. So I think the podium was possible on merit, the car was flying.

“And I was very happy, but unfortunately the rain came five laps to the end. Some people took some risks, some people other risks, and we were unlucky, or the podium finishers, let’s say, were very lucky, but in these conditions it’s always a lottery. On normal conditions were very-very good, so I am happy,” summed up Alonso.

The Alpine driver expressed his lack of luck when it came to rain, which made hims sad mostly, as it happened in a grand prix where they looked to be a better position. “Norris did an amazing race, and just by luck he is not on the podium or his first ever win in Formula 1,” said Alonso. “So when it rains, it’s just a very lucky factor.

“And I’m sad because when we are not competitive and we are P11 or P12, it never rains, so we never get lucky. And that we are P3, it just rained. So not sad. But definitely we are not very lucky. But every point we got this year is on merit, we never had any gifts this year. So I’m proud of every point that I took this year.”

Despite the result, Alonso stated that Sochi was one of his best races so far this season. The speed of the car, the racing ability, and the number positions he gained solely by merit were those that he was proud of. He was happy to have managed to pass so many cars, which included Verstappen.

“We seem ultra competitive, so we need to understand if we did something different here, try to keep going forward for the next events, because the car was very fast, so that was a very positive sign,” said Alonso. “And I was not sad. For sure, I think we should be on the podium in terms of executing the race and driving. We were in front of Verstappen, we were pulling away from him, we were in front of Sainz.

“Overall, it was very fun because I was faster, so it was very good. I really enjoyed it, when conditions were tricky, the car was very good, we changed tyres very late, so my tyres were in very good conditions, the yellow tyres. I did overtake Verstappen, I overtook Daniel, I overtook Perez, I overtook Carlos, as I said, it was not people crashing in front of me or having DNF, it was on merit, we were overtaking people and so, I am very proud of the race and the team,” summed up Alonso.