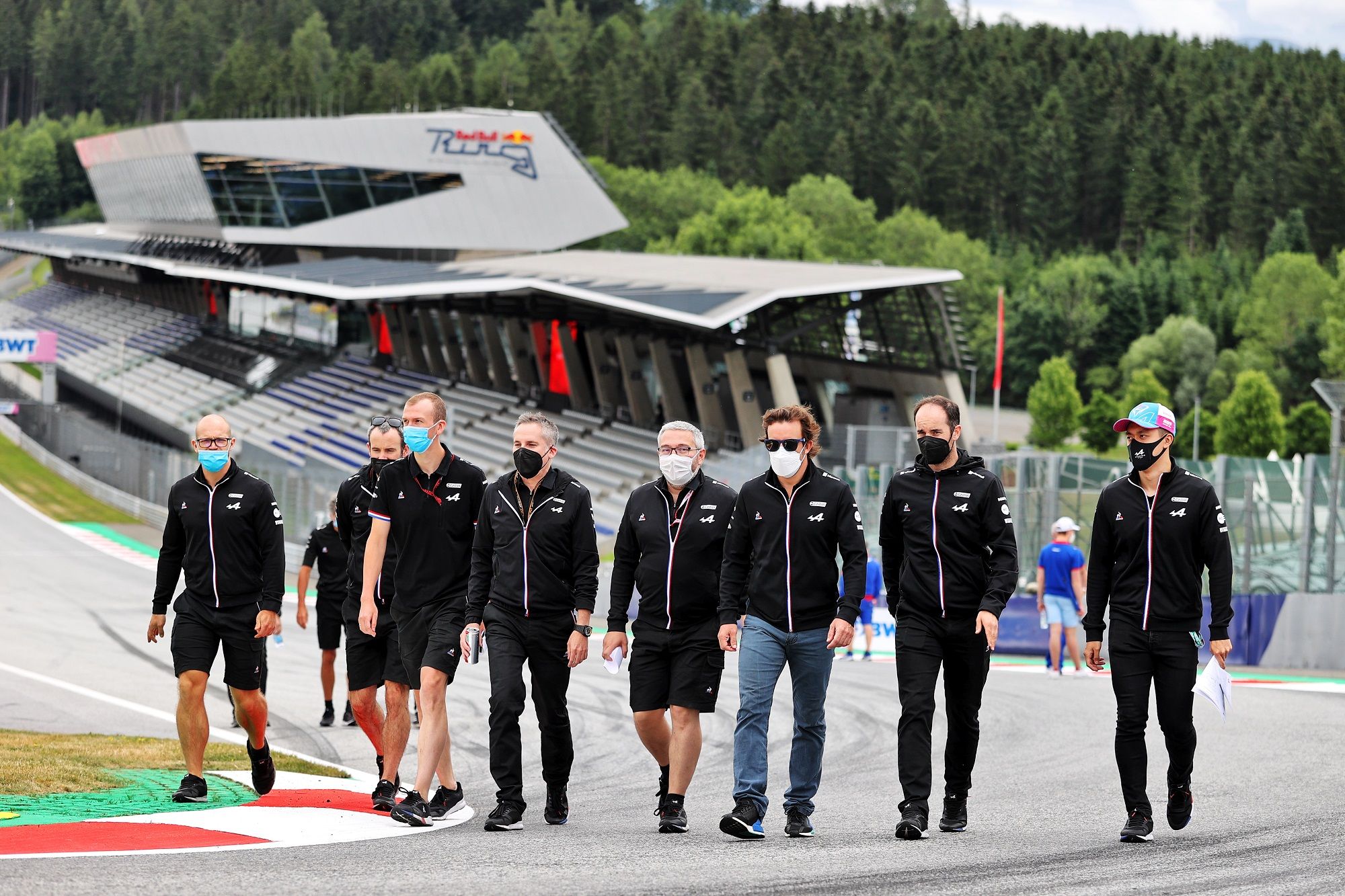 While Alpine’s Alan Permane thought it was the dedication from Alonso with regards to his track walks, which he despised for so long, the Spaniard put it down to superstition simply, when asked about it during the F1 Austrian GP press conference.

His track walk started in Portimao, which was a new circuit for him. He skipped in Barcelona and Monaco and did so again in Azerbaijan and Red Bull Ring – where Alonso did not score in the former two and did so in the latter two.

Despite staying at the same circuit for a double-header, Alonso was one of the few, who did a track walk, this time alongside Guanyu Zhou, who will make his FP1 debut for Alpine in the Spaniard’s car. “I did one in Portimao this year because it was a new circuit to me,” said the Alpine F1 driver.

“And it was the best weekend, we scored good points. We were competitive. We stopped doing it in Barcelona and in Monaco, and we came back to not scoring points. So we said OK we try it again in Baku and I was sixth. It was our best race. From that moment we keep doing track walks, and we keep scoring points on Sunday.

“At the moment it’s a pure superstitious thing,” summed up a honest Alonso, who has scored in five races so far to be 11th with 19 points. Staying with the Spaniard, he came down heavy on the FIA for warning Red Bull over Verstappen’s celebration last weekend.

FIA Race Director Michael Masi urged Red Bull to not repeat such celebrations, which may become a safety issue. Alonso thought burnout is nice to watch along with donuts and that the race control should be more into track limits and other racing aspects.

“I like when you can be yourself, and this burnout I think it was nice to watch,” said Alonso. “Even the donuts sometimes in Abu Dhabi, I think the fans they like that, and you see a lot of videos from those moments, from social media, etc. So the fans, they like that. I think the FIA should police more the track limits and Turn 1.

“I was the only one making a move into Turn 1 at the start last weekend, and the two cars that I overtook, they missed Turn 1 and they exited in front of me. There is no warning on that, so there are things that for sure we can improve from the fans’ point of view,” summed up Alonso, as Verstappen, who was involved in it, was more sympathetic towards the FIA, noting that he understands why it can become a safety issue.

“I understand of course about safety, but I looked in the mirror, went all the way to the right, and took it easy,” said Verstappen. “I mean everyone was on the left, and I just did a burnout. Okay, if it’s not allowed, I wouldn’t do it again. At the time I thought it was really funny and safe, but of course I understand they don’t want to see this happening again, which is fine for me.”

Verstappen then jokingly added on how they can celebrate: “Yeah, bungee jumping, or cage fighting, it would be great. Backflips with the car? I don’t know if the FIA likes that, you think or not? Maybe we can improve it. Maybe get some bonus points as well, that would be great – the best celebration.”

The reason Masi warned Red Bull was for an incident which took place in 2015 in Formula Renault 3.5 series at the same venue. Former F1 racer Roberto Merhi slowed down after crossing the finish line and current Williams driver Latifi smashed into the back of him.

Latifi noted that he looked at his mirror for one moment and that was enough for him to crash into the back of Merhi. Co-incidently, the Canadian was the first driver to be behind Verstappen last weekend, as well. He was the first of the lapped cars to cross the line.

This time, though, it was much safer as Verstappen was close to the wall, while Latifi went through on left on the racing line. “When I was coming to the finish line, I saw Max pulling to the inside to celebrate with the team like most drivers do,” the Canadian said. “So I just make sure to stay as far to the left as possible.

“I guess in general, just as a rule of thumb, it’s probably not the best thing to really slow down that much. Obviously in that situation there was no cars directly behind him that were racing and obviously that wasn’t the situation all those years ago in 2015.

“I was racing with another car quite close and as a result, I kind of had my eye in the mirrors and was not expecting a car to be stopped right in front of me on the grid. So obviously, it can end very badly, as we saw back in 2015.

“I think it just has to be a bit of a compromise in that sense. Michael thought it was dangerous, so I don’t think a lot of other cars will be doing that in the future. So it’s probably best to not slow down that much,” summed up Latifi.

Here’s the video of the incident: