Home F1 Alonso goes through first and lap attacks as Sainz laments on no... 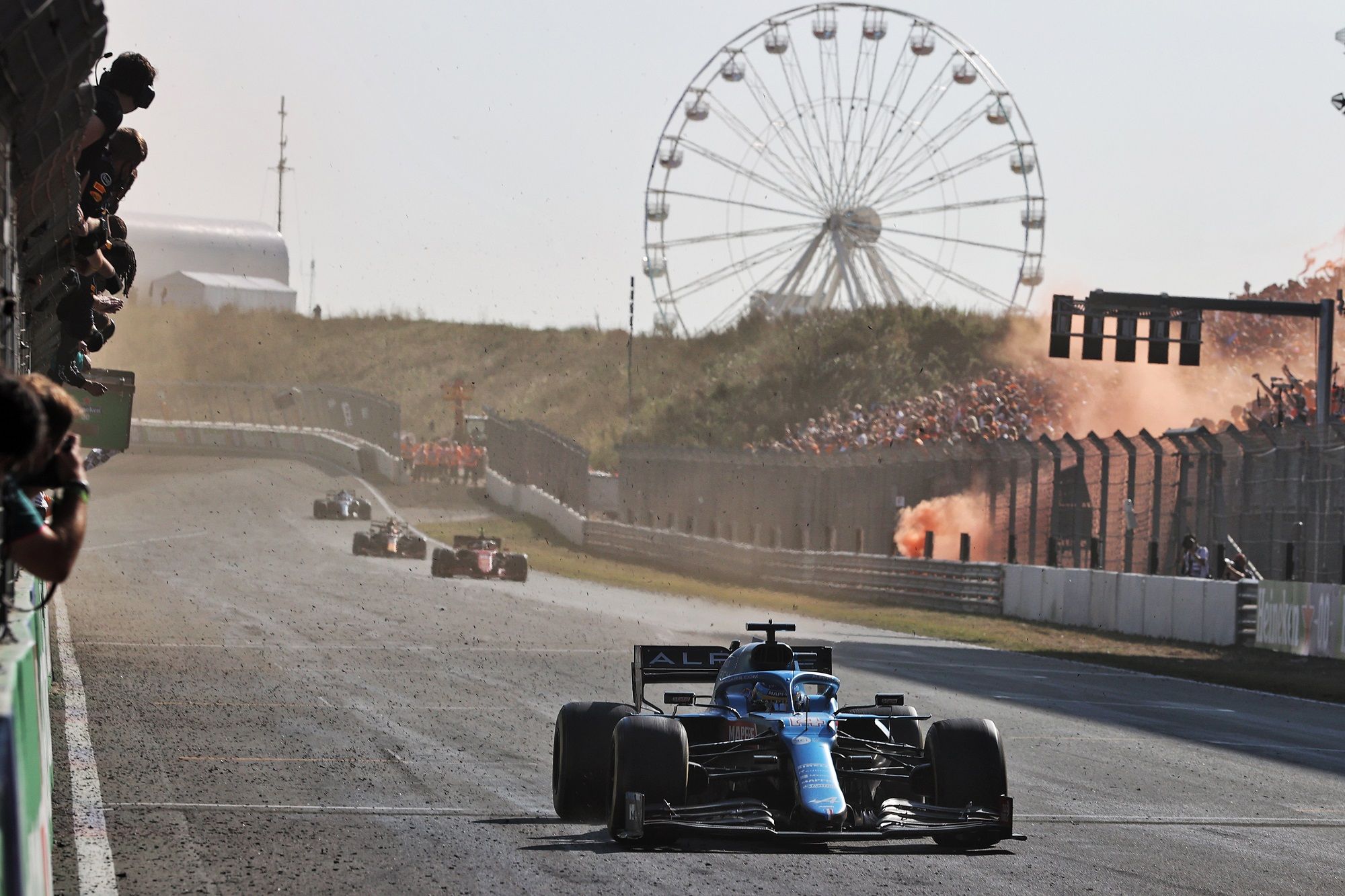 Fernando Alonso goes through how his Lap 1 and Lap 71 were in F1 Dutch GP, as Carlos Sainz laments no pace on losing P6.

Alpine’s Alonso had a pretty great F1 Dutch GP this past weekend. Having qualified eighth on Saturday, he fully sent it on Sunday, finishing sixth in front of teammate Esteban Ocon and also Ferrari’s Carlos Sainz, whom he passed on the final lap of the grand prix.

The Lap 1 saw an aggressive driving from the Spaniard, where he did everything to overtake Alfa Romeo’s Antonio Giovinazzi, which he successfully did along with overtaking Ocon for seventh. He held on to the place until the final few laps of the race where he then saw Sainz in sight ahead, charging at him to possibly take sixth.

Sainz’s lack of pace aided Alonso in making the overtake on the final lap. Talking about the race, the Spaniard added on the Lap 1 clashes he had, where he was fortunate enough to continue on. “The plan at the start was to go on the outside because I was on the green side of the grid, and I wanted to have a straight start and not much movement to try to go around the outside of Turn 1,” he said to host of written media.

“But Giovinazzi had the same plan, so he was on the outside and blocking a little bit my idea. After that, I had to improvise a little bit into Turns 2 and 3, and there were a lot of cars. I was even on the grass at one point. Then in Turn 3 I chose to run on the outside and I kept good momentum on the exit, but Carlos was in the middle, in the way, so I had to brake at the exit of Turn 3 which didn’t help.

“But then Giovinazzi and Carlos were fighting until Turn 7, and I could squeeze one position there. But I think I had been hit by Esteban in Turn 1, by Russell in Turn 2 and by Giovinazzi in Turn 6. So I had very robust tyres with no punctures, so that was good,” summed up said Alonso.

After a steady run, the last lap overtake on the Ferrari of Sainz had a stressful build up until it finally happened. The Alpine driver had been trying for the overtake during the six laps that were left, at one point almost hitting the barriers. At Turn 3, he locked his front tyres up and went wide on the banking, just barely avoiding the wall.

With no control of the car because of the lock up, it was honest luck that fortunately saved his race. However, this was not covered by the international feed and so during the race, anyone not at the circuit was unaware. “Actually, I was trying to forget that and now you remind me, it was already a stressful moment for sure,” said Alonso. “I had a go at Carlos about six laps from the end at Turn 1 on the inside, and I thought I was making the move.

“Then in the last moment he released the brakes and braked even later, so we nearly touched in Turn 1. Then, into Turn 3, I was too close, so I locked the fronts a little bit and I ran wider than normal. I was outside of the circuit, but obviously there is about two metres from the banking to the wall, and I was about 10cm or something from the wall with both front tyres locked up. It is not that I did anything magic there. It was just pure luck, as I was not in control of the car. I got lucky there,” summed up Alonso.

Able to see his overtake through at the end allowed Alonso to bask in the P6 glory, however, less content was Sainz right behind him finishing in seventh. Sainz’s race pace was unfortunately not as strong as it was during the free practices and qualifying on Friday and Saturday. The car was not well, and the Spaniard was brutally aware of the fact.

“I honestly didn’t enjoy it at all, I was the whole race just sliding around, really had zero pace in the car,” said Sainz, whose teammate Charles Leclerc was fifth. “I didn’t feel at home with it compared to the rest of the weekend. For some reason I was very far away in terms of feeling, in terms of yeah feeling at home with the car.

“It is something to analyse as it’s the first time it has happened this year where I really don’t find myself and I spend the whole race sliding and struggling for pace and in the end also struggling for tyres, It was very, very strange. Honestly, it’s a big puzzle at the moment because I don’t know where the pace went and I’m pretty sure there was something going on that I need to look into,” said Sainz to TV media.

Here’s Sergio Perez on missing out on Carlos Sainz