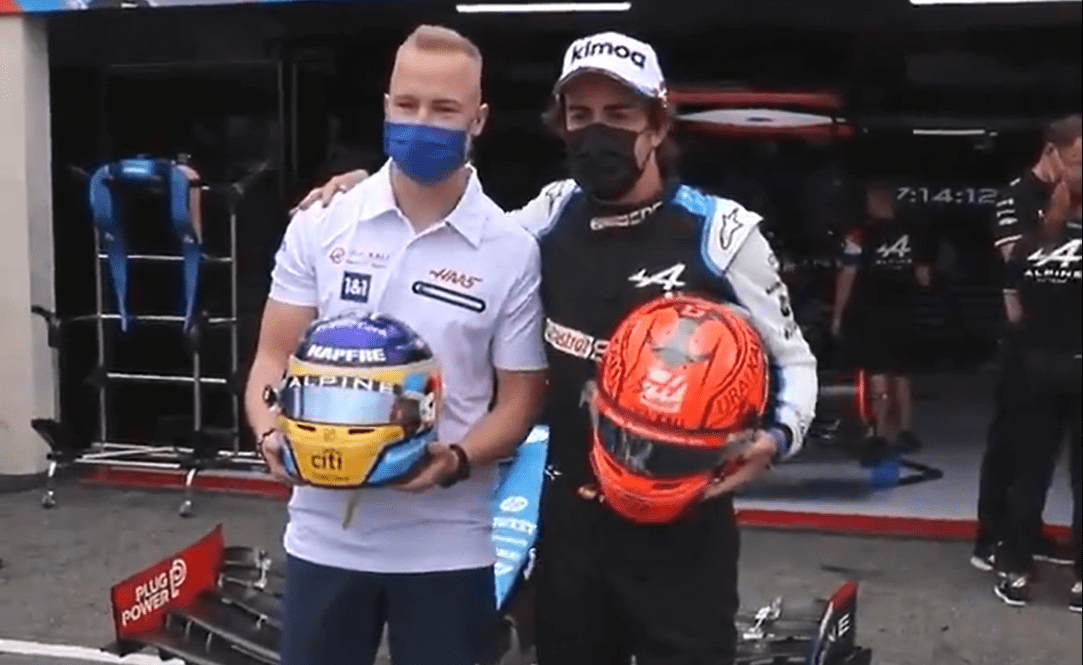 After having exchanged his helmet with Williams’ George Russell few weeks back, Alpine’s Alonso had another one with Haas’ Mazepin on the onset of F1 French GP. The Spaniard is growing his collection, whereas for the Russian, it seems like, it is his first.

ANOTHER ONE for the collection!

Aside the helmet exchange, Mazepin was fiery in the French GP press conference, much like his Haas F1 teammate Schumacher, as the duo discussed about their last lap run-in in Baku. The Russian escaped a penalty after the FIA overlooked the incident.

They promised to look into it later but it is yet to be firm if they did. The drivers, though, had a meet with their engineers and Haas team boss Guenther Steiner, where things were sorted out, as the Italian noted about in Baku’s post-race release.

From the drivers’ point of view, Schumacher revealed that Mazepin apologised to him for the incident, but the German reckons that these things shouldn’t happen and the FIA should deal it with more diligence and let anyone escape through punishments.

“There was a meeting right after the after the race between Guenther, Ayao and Nikita,” said Schumacher. “Obviously they talked about the incident. After they called me in and we spoke about it all together. He did, after seeing the video, apologised for it. So obviously in that sense we are all fine and I no longer thought about it afterwards.

“In the moment it was rather confusing, in a way, because I was not expecting it at all, especially between team mates. Obviously I understand it’s the last lap, we’ll fight. But if you come in such a tow you have, and all what is left basically in terms of battery and then you use everything and there’s no stopping.

“The only way you stop somebody is by scaring him or pushing into the wall. And obviously he tried to do that. I, in fairness, kept my foot down. So I got by him anyway. As I said it was unexpected from my side and that’s why I had such a strong reaction to it afterwards. But as I said and as the team also mentioned, the air in that sense is all cleared up and we’re all on a fresh start for here,” Schumacher noted, as he admitted that he will have to re-build the trust with Mazepin after the run-in.

“I’m sure that after the talks that we had with the team, everything should be in order to build up onto that trust again,” said Schumacher. And we are all racing drivers so I’m sure we’ll manage. As for the stewards, if it happens again, probably there will be harsher consequences. But also in that case, probably because it was an incident that happened between team mates it’s probably kept more internally than being out-spoken and kind of dealt from and with the race directors or stewards.

“But as I said, I think that if it happens again, surely it will be addressed towards the stewards and the race director,” summed up Schumacher, while Mazepin took the run-in as a misunderstanding rather than an incident.

“I think the wording there isn’t quite right,” said Mazepin. “There was no incident. Both cars returned to the pits with front wings and the paint job was as polished as it was just before the race. So I would like to look at that in a pretty positive way. We’ve had a bit of a misunderstanding between us.

“Obviously going into your last lap in a pretty hectic race – which is not the first one this year but something that, being a big Formula 1 fan, I haven’t seen many times a F1 race being stopped – I thought he would choose the inside line and then he chose the outside line. When I saw that he committed to it, I backed out of it because in the end, we’re not fighting for any points and the team’s result is the priority for me,” Mazepin noted, while adding about the vibes between the two and the apology.

“It has been like that since day one and it continues to be so,” said Mazepin. “Obviously it was both young drivers pushing the limit, you get that point like this. But like I said in the beginning as long as both cars return in one piece with each other I feel that’s fine with the team boss. As for the apology, our discussions that go on within the team, I believe, should stay within the team.

“However, if it was already brought out, I will just say that I apologised to him if that’s how he felt and he clearly was very upset. But I would just say it is very important that he doesn’t expect to have it too easy and I’m never going to not look for whatever reason of one another. But I just clearly didn’t expect him to be where he ended up being. And if he felt the way he did, I said sorry because that’s what I think I should be doing, but however, it wasn’t for my particular doings at that time,” summed up Mazepin.