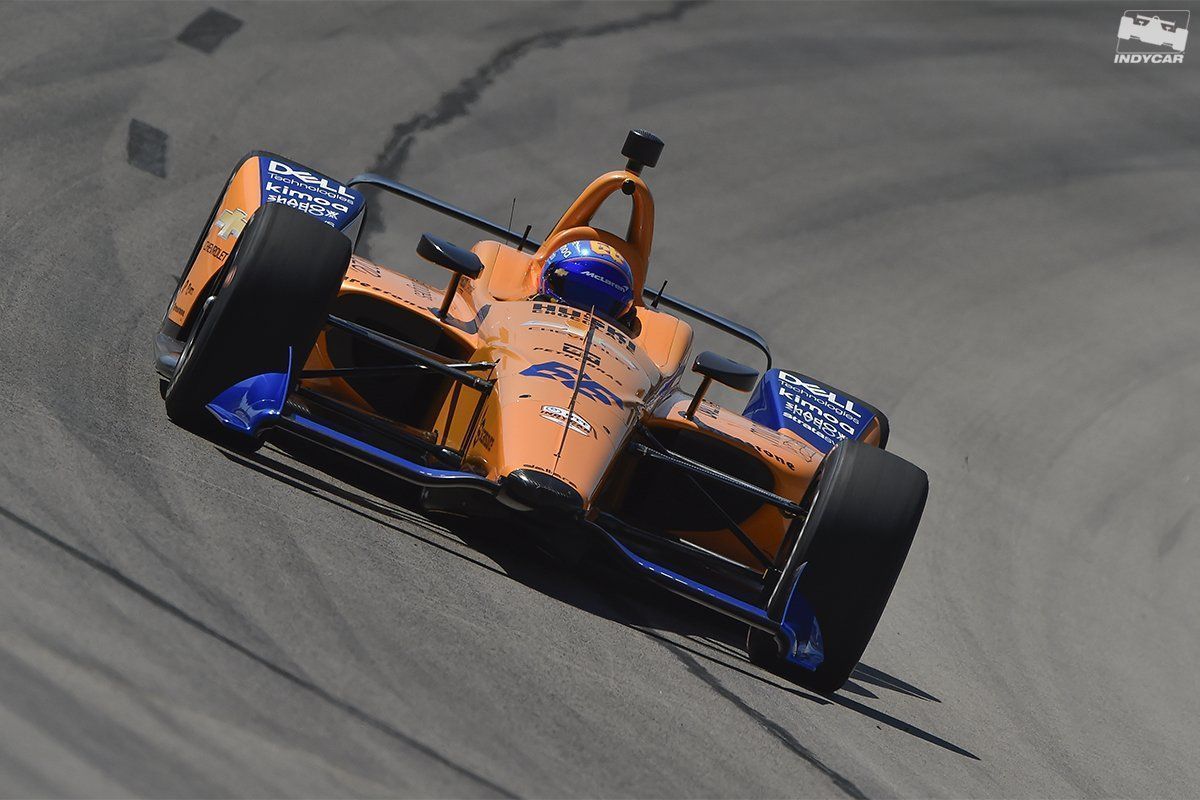 Alonso was the sole runner at TMS on Tuesday – his first time at the circuit – with the Spaniard running a sister Chevrolet-powered McLaren Indy500 car from the original, which the team revealed was en-route to Indianapolis for the April 24 open test.

Earlier in the week, the Woking-based outfit released images of the new papaya-blue livery of their Indy500 car with the driver overalls also similar to their F1 team. His Texas run was also the first time for Alonso running the new universal aero kit.

The Spaniard spoke to IndyCar’s website about the work the team has been doing behind the scenes along with Carlin Racing, who are providing McLaren with the team support. “It was definitely quite special,” said Alonso after the run.

“The oval is very different to Indianapolis Motor Speedway, so you feel really the banking and you feel the compression on the body. It’s definitely physically different, the feeling you get, so that was interesting.

“It’s a little bit more of an unknown situation for all of us [at the moment]. We believe in different philosophies in terms of setup and ways to prepare the cars. So we are experimenting those.

“We started with a baseline setup that we know has been used in the past, but slowly we tried to test different things. It was the first day and in Indianapolis it’s going to be a little bit more deep into that.

“A lot of work on the simulator [has been done] as well to explore these different roads, and let’s see what we can find.” The day went smoothly for the team despite some early hiccups – in all they managed to complete 105 laps in the afternoon.

Elaborating on the new aero kit, Alonso didn’t want to pass any judgement but go with what others have been saying so far. “I remain on the idea that this universal kit is said to be more difficult to drive with a little bit less downforce,” he said.

“So you need to optimize the setup a little bit different with this kit and it will depend on a little bit of that week on the wind conditions, the temperature and, more importantly, especially for me, how these kits behave in traffic.

“Running alone normally is a little bit easier, but in traffic I think it’s going to be challenging when you lack downforce. I am looking forward to go to the open test first [on April 24], to set up really there with the team and the car.

“And then start improving the car and being hopefully competitive in May when the race comes. It’s going to be tough, as we knew. These setups, we know how delicate they are, how extreme they are.

“I think Indy also is quite a windy place, so you need to keep chasing the track conditions with a setup. It’s going to be a big challenge and we are ready to take it.” As mentioned above, the next run with the primary car will be on April 24 at Indianapolis.