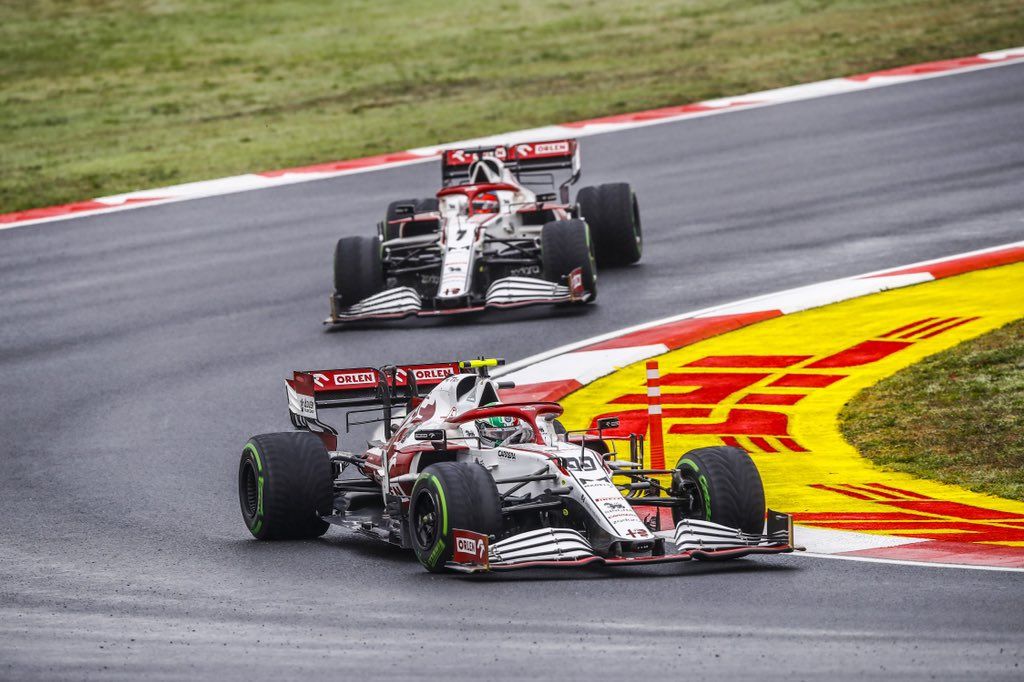 Alfa Romeo were left a bit disappointed after Antonio Giovinazzi did not concede to team orders to let go Kimi Raikkonen in F1 Turkish GP.

Not long after the F1 Turkish GP, an interesting story emerged regarding the Alfa Romeo team and the ignoring of team orders by Giovinazzi. While running 12th and 13th, Raikkonen was catching his teammate at a rate of two seconds a lap. Even on Lap 50, he was almost three seconds quicker – both catching Alpine’s Esteban Ocon for 10th.

The call was made to Giovinazzi to “swap” positions as Raikkonen was the quicker driver. It was made not once but twice. the Italian then advised his team he would increase his pace, especially at Turn 8, where he was lacking more time. In doing so, they were catching McLaren’s Daniel Ricciardo and overtook him on Lap 55.

The Lap 58 saw the pair start the last lap five seconds behind 10th place Ocon, who’s tyres were failing fast. In the end, the Frenchman held on to 10th holding off Giovinazzi by less than a second, while Raikkonen ended up several seconds behind having run wide on the final lap. Xevi Pujolar of Alfa Romeo explains the sequence and disappointment.

“We asked to swap position, but at this point, Antonio started to pick up the pace and he decided that he wanted to stay ahead,” said Pujolar to written media including The Race, Racefans.net, F1, Motorsport Network and more. “Maybe that situation was a couple of laps when we potentially could have been faster as a team.

“And then we needed one more lap to catch Ocon. For the team, that was not ideal. I did not understand well why we couldn’t swap at this point because at the end we can change it back depending on the situation. For us, it is important to achieve the points and Kimi’s pace was strong at the time.

“We were happy with the pace and the way we managed the race in these difficult circumstances so the calls were correct. It’s disappointing that on that team radio call on the end that we didn’t manage to score positions, but after a difficult qualifying, we recovered. Being P11 is always frustrating,” summed up Pujolar.

Bottom line was purely and simply that Giovinazzi ignored orders not once, but twice. If he had moved initially, Raikkonen might have charged earlier as he would have had more laps to play with to catch Ocon. Judging by the strategy adopted by Ocon, it seems odds on he would have got 10th and a point for Alfa Romeo.

Also, as it stands, Giovinazzi has currently no drive for 2022. To a large extent, he didn’t play the team game on Sunday when he perhaps should have. Both the drivers did not speak much regarding the team orders after the race.