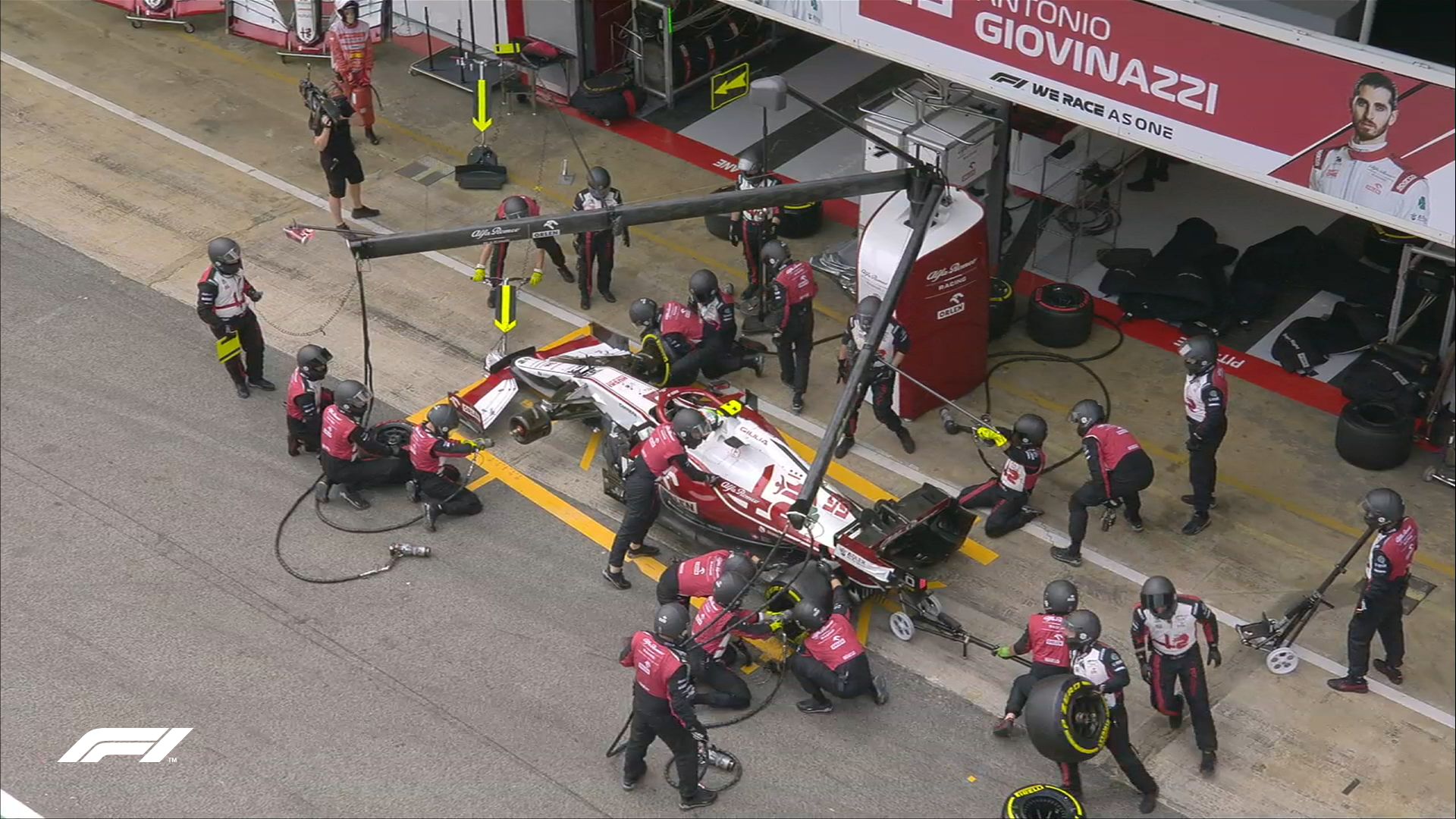 Alfa Romeo explained the operational issue with the pit stop and also a steering issue with Antonio Giovinazzi in F1 Spanish GP.

Already at the start, Alfa Romeo were on the backfoot, with a disaster pit stop under the safety car for Giovinazzi in F1 Spanish GP. The team brought him early to change tyres, but it proved too costly. The Italian also had a steering issue, related to his dash board.

His dashboard asked him to follow the FIA delta time behind the safety car, which meant, he couldn’t really catch the back of the pack on time and on re-start, he was still 10s down on the last driver of the pack – a double blow to his chances.

Xevi Pujolar, from Alfa Romeo, explained what went wrong in the pit stop, where an operational problem damaged the medium set, which they were to use for Giovinazzi. In a positive news, the mechanics were quick to realise that the tyre was flat.

“It was an operational problem when just picking up the set at one point when getting everything ready in the garage that damaged the valve,” he said to media including F1, Racefans, The Race, Motorsport Network and more. “We’ve got a monitoring system. It was okay when the race started, but at some point in the garage, then it it went wrong, a couple of laps before before the pitstop.

“For sure it is an area that we can we can improve, that shouldn’t happen. But at least we should have been able to recover, because it was a safety car. So if then we will didn’t have the other problem with the dash, I think we were pretty much there at the back of the group issue. It’s just that we wanted to have the two mediums, that was the plan with the strategy.

“And I think it would have been fighting for the points. Because he would have been very well positioned on what we could do with the tyres with two mediums. But anyway, it is what it is. Regarding the dash issue, we’re talking to the FIA, we can’t understand why we had this problem. And yeah, I don’t know yet.

“It’s a shame, because the time that we lost, and we lost already one set of tires, and then we lost time that costs him, and then he was falling in traffic. And it cost him then a lot in the race,” summed up Pujolar, as Giovinazzi was quite disappointed after the grand prix, terming it as plain ‘shit’.

“After that moment, my race was just compromised, nothing happened in the front as well,” said Giovinazzi. “We lost one set of mediums too, just a shit race. Also, my steering wheel was not working behind the safety car because it was still the delta to follow. So when I started at the green flag I was 10 seconds behind.”

Here’s the video of the pit stop: https://www.formula1.com/en/video/2021/5/2021_Spanish_Grand_Prix__Air_pressure_error_ruins_Giovinazzi_pit_stop.html