Despite an already dense single-seater career, Alexander Albon was the revelation of 2016 in GP3 Series by winning four races and eventually losing title to teammate Charles Lelcerc in the last week-end of the season. Before that, Albon had been into the Formula Renault 2.0 Eurocup and the FIA F3 European championships without being title contender. He also was part of the Red Bull and Lotus junior teams. He comments:

“I am really excited to be working with ART Grand Prix for a second year! I learnt a huge amount last year and we have become one big close family. Moving up to the GP2 series is an important step in anyone’s career and I am extremely fortunate to be with a top team who already understand me. There’s a lot to learn coming from GP3, and the experience and method of working at ART Grand Prix is the reason they have won so many titles.”

“In GP3 in 2016, Alex exceeded all of ART Grand Prix’ expectations by integrating himself instantly into the company and fighting for pole position and victories from the first race weekend of the season. He didn’t need a period of adaptation to become one of the best drivers in the category and he didn’t stop progressing throughout the year. He missed the title by very little and it was through no fault of his own, either sporting or personal why he didn’t clinch it. Alex soon had all the makings of a GP2 driver at ART Grand Prix and we are delighted to continue our collaboration for another year. It is necessary to follow the course from GP3 to GP2 and ART Grand Prix will be alongside Alex every step of the way to give him all the technical help so that he can fight at the front.”

Alexander Albon will team-up with Nobuharu Matsushita who starts his third GP2 season. It is also interesting to note that the 2016 GP3 top 3 will battle in GP2 in 2017 as Leclerc and Fuoco also got promoted with Prema Racing. 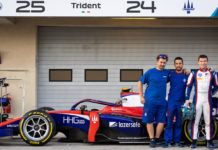 Williams graduates to F2 with Trident in 2022 season