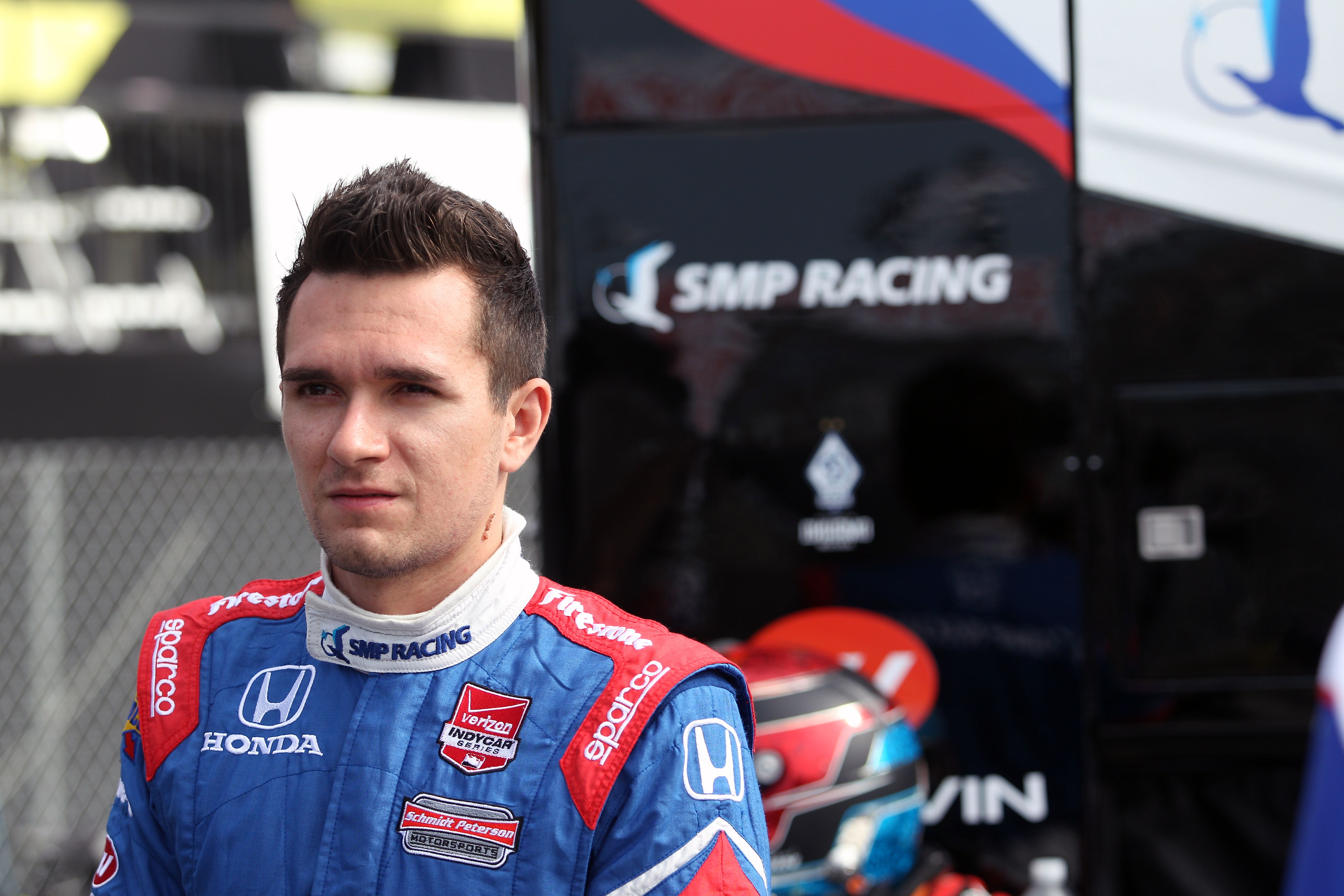 Mikhail Aleshin, who sustained injuries in a post-qualifying practice crash for the 2014 Verizon IndyCar Series season finale, will get behind the wheel of a Schmidt Peterson Motorsports car again Aug. 13 at Sonoma Raceway.

The refresher test will be in advance of the Aug. 30 GoPro Grand Prix of Sonoma at the 2.385-mile, 12-turn road course. Schmidt Peterson Motorsports has filed an entry form with INDYCAR for Aleshin to drive in the season finale.

“I am incredibly happy to make my return to this entertaining championship and my team, with which I raced last year and achieved considerable success,” said Aleshin, who posted a best start and finish of second at Houston 2 in 17 races.

“This year, my priority is my (European Le Mans Series) campaign and the continuous development of the BR01 (Nissan for SMP Racing in the LMP2 category). As for next year, we’re doing all we can to continue in IndyCar and I hope this race can be a significant step towards that goal.”

Team co-owner Sam Schmidt said Aleshin “feels like he has some unfinished business” in the Verizon IndyCar Series. They had remained in contact since last year.

“He was very quick last year and didn’t want things to end the way Fontana did,” Schmidt said. “Sonoma, being the last race, is obviously an important one. If he does well, maybe we’ll see him back here next year.

“We’ve been talking all year. At first, it was an effort to try to make the ‘500’ as a third car. That didn’t happen because of a conflict with his racing schedule in Europe. Now he’s wide open so we’ll see what happens.”

Aleshin will be a third Schmidt Peterson Motorsports entry for the 85-lap race at Sonoma Raceway. James Jakes drives the No. 7 Schmidt Peterson Motorsports Honda and Ryan Briscoe drives the No. 5 Arrow/Lucas Oil Honda. He has competed in six races in lieu of regular driver James Hinchcliffe, who sustained an injury to his upper left thigh in a practice crash May 18. Conor Daly also has filled in for Hinchcliffe in three races.

Ten drivers are mathematically in contention for the Verizon IndyCar Series championship with two races left. The ABC Supply 500 at Pocono Raceway is Aug. 23. Further intrigue is added to the GoPro Grand Prix of Sonoma with double points corresponding to race finishing position. It is the 10th consecutive year that the series title has been decided in the finale.

Aleshin, 28, of Moscow, competed in Formula Renault 3.5 in 2013 and 2012, along with driving in the GP2 Series in 2011 with Carlin before moving to the States. Overall in his first Verizon IndyCar Series season, Aleshin recorded seven top-10 finishes in his 16 starts and led three races.

Aleshin, who had qualified eighth for the finale at Auto Club Speedway in Fontana, Calif., sustained a concussion, chest injuries, fractured ribs and a broken shoulder in the Aug. 29 practice crash. He was transported to Loma Linda University Medical Center and two weeks later transferred to an Indianapolis hospital. He was released Sept. 16 and returned to Russia to continue his recovery. He also was married in the fall.