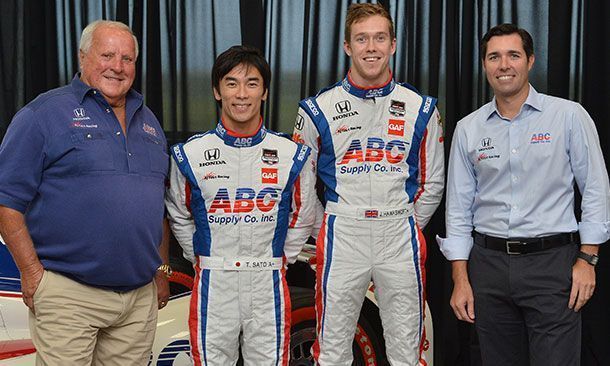 Off-season? What off season? Verizon IndyCar Series team owner A.J. Foyt and his son, Larry Foyt, have been busy since the 2014 season ended two months ago.

They have expanded the Verizon IndyCar Series team from one car to two, hired a rising star to drive while retaining the veteran driver who sparked life into the program. They made a deal with ABC Supply Co. Inc. to sponsor two cars for the next two years, and they bought another race shop in the shadow of Indianapolis Motor Speedway.

For the past 12 seasons, AJ Foyt Racing has been a single-car team, but that will change in 2015 with the hiring of 23-year-old driver Jack Hawksworth, the 2014 winner of INDYCAR’s Tony Renna Rising Star Award. Hawksworth, of Bradford, England, will join veteran Takuma Sato, who returns for his third season with the ABC Supply Racing team. Their Dallaras will be powered by Honda engines and incorporate the Honda aerodynamic bodywork kits.

Celebrating its 10th anniversary as primary sponsor of AJ Foyt Racing next year, ABC Supply agreed to sponsor the No. 41 car and also extended their contract through the 2016 season.

“With ABC’s 10th Anniversary with Foyt Racing in 2015, and the 100th running of the Indy 500 coming in 2016, this is the perfect time for us to add a second car to the ABC Supply Racing team,” said Keith Rozolis, President and CEO of ABC Supply Co. Inc. “We are excited to have Takuma Sato back driving the No. 14 car, and we look forward to watching Jack Hawksworth show us what he can do in the No. 41 car.”

Hawksworth, who as a rookie this past season, qualified in the top six in three of his first six races and posted his best finish of the year –third– in Houston2.

“This is a great opportunity for me.  Ultimately, I want to win races and I feel that this is the place I can do that. We’ve got everything in place, a great sponsor in ABC, and good people who build quick cars, so we have the potential to build something really special. That’s what excites me. It’s a growing project and I want to grow with it, be a part of it and be a part of its success.”

Sato, who won two pole positions in 2014, is ecstatic about the expansion to a two-car car team.

“It is absolutely fantastic news that AJ Foyt Racing is expanding to a two-car team,” said Sato. “I really feel positive about it and welcome Jack in joining us. I am thrilled to continue racing in IndyCar for a sixth season and being with the same team for the third straight year. The continuity of working with my engineer, Don Halliday, and the same crew gives us a strong momentum in learning and more confidence overall.

“We had some very successful race weekends but we need more improvement,” Sato continued. “That is just the nature of racing. So as a two-car team, it should boost these things massively. The track time is very limited nowadays but there are always tons of things to try. That will be especially true with the new bodywork that’s coming. To have quality testing and maximized running time to evaluate the car is essential. I am very much looking forward to starting winter testing right away.”

Perhaps the most thrilled with the expansion is Team Director Larry Foyt, who has been working for several years to achieve that goal as a step toward improving the team’s performance. In addition to hiring Hawksworth, Foyt promoted Raul Prados, who for the past three years worked with Halliday, to chief engineer on the 41 car after Prados’ successful debut in that role at Indianapolis in May.

“It’s hard to express in words how thrilling it is to be expanding our operation,” said Foyt. “It has been a goal of mine for years, and to finally see it become reality … all I can say is that it has already been a special and busy offseason. I can’t give enough gratitude to ABC Supply for their continued support of the ABC Supply/AJ Foyt Racing program. How quickly 10 years goes by. There have been many ups and downs, but they have stuck with us and helped us grow into a team that will be a force to be reckoned with next year.

“It’s great having the continuity of Takuma Sato and Don Halliday working together for another year. We know Takuma can win on any given weekend in the 14 car; I’m looking forward to putting what we’ve learned together the last couple of years to good use. As well, having who I feel is a future superstar — Jack Hawksworth — join the team gives me twice the reasons to be excited. I appreciate the commitment he is making to the team by moving to Texas, and I think the combination of him and young engineer Raul Prados will produce some stellar results.

“And I can’t end without giving a Texas-sized thank you to my dad. At nearly 80 years old, he certainly doesn’t need the stress and concerns of a multi-car race team, but he has been supportive and behind me 100 percent. Now we have to put the finishing pieces in place and produce because you know with A.J. only one thing matters — winning.”

Foyt, who turns 80 in January, shows no signs of slowing down.

“Running two cars is nothing new for me but it’s been a while,” said Foyt, who hasn’t run a second full-time entry since 2002. “I always said we wouldn’t do it again unless we had the proper people and support to do it right. We’ve got two drivers who love winning –almost as much as I do–and our sponsor ABC Supply, whose support is only outdone by their loyalty.  I’m looking forward to next year being the best one yet.”

For the Foyts, this offseason is just the prelude to a busy and successful 2015 race program.