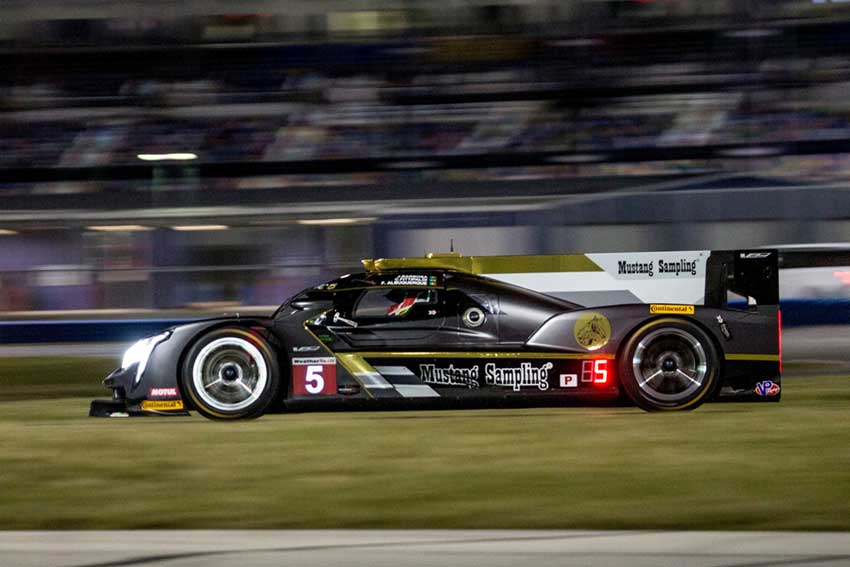 Almost a complete domination by Action Express (Mustang Sampling Racing #5) team in 2018 24 hours of Daytona edition. An historic edition with a race distance record, and a successful run again for Cadillac DPi who takes his second win in a row.

In those last two hours of the race, Mustang Sampling Racing #5 lost his two laps of distance because of a conservative drive. Filipe Alburquerque crossed the line after 808 laps taking his first Daytona 24h win, not the first for Joao Barbosa and Christian Fittipaldi who once again win together this race as they did back in 2010 with the same squad.

Cadillac DPi takes his second win in a row, a great day for American motor racing as it is the 18th straight consecutive win for an American squad in this historic race, despite no American driver win today.

Fernando Alonso team’s, United Autosports #23 retired after a race with several issues. They spend a lot of time in the garages which made him lose 90 laps with Action Express. Despite that they showed a great performance while they were on track, as they did their teammates Owen-De Sadeleer-Di Resta-Senna to finish fourth.

In GTLM the whole race was a complete domination by Ford Chip Ganassi Racing. The car #66 and #67 battle for the race win which finally was for Briscoe-Westbrook-Dixon, Hand-Müeller-Bourdais finished second.

The Corvette Racing of Magnussen-Garcia-Rockenfeller, tried to catch the American squad during the whole, but it wasn’t enough. They complete the podium in the category ahead of teammates Gavin-Milner-Fassler.

In GTD, GRT Grasser Racing Team #11 secured the victory ahead of Michael Shank Racing with Curb-Agajanian #86 and Paul Miller Racing #48.