There was some action in FP3 of F1 Abu Dhabi GP at Yas Marina circuit, with Red Bull pair leading the Mercedes pair and McLaren separating them and the Ferrari pair. It was Sergio Perez on top with a 1m24.982s lap from Max Verstappen (1m25.134s).

The Dutchman did a late lap but in qualifying, it would be deleted for track limits. Lewis Hamilton (1m25.222s) was third from George Russell (1m25.395s), with the two running different rear wings. The former is under investigation for not slowing under red flag.

McLaren’s Lando Norris (1m25.518s) slotted in fifth. The Brit had his brakes heated up which was same for teammate Daniel Ricciardo, while Aston Martin’s Sebastian Vettel having one too. The McLaren led the Ferrari pair who weren’t feeling superb.

The Alpine pair were 11th and 12th with Esteban Ocon ahead of Fernando Alonso, where the Frenchman caught out the stewards. They raised the yellow flag for him thinking he was stopping but replays showed him just slowing for other cars.

AlphaTauri’s Yuki Tsunoda was 13th from Alfa Romeo’s Valtteri Bottas, who dropped a bit of a pace in FP3. AlphaTauri’s Pierre Gasly was 15th after causing a red flag. His wheel cover came off after a kerb ride which needed to be recovered.

The Frenchman managed to return to the track after the mechanics fixed it up. Aston Martin’s Lance Stroll was 16th from Haas’ Kevin Magnussen & Mick Schumacher, Alfa Romeo’s Zhou Guanyu was 19th and Williams’ Nicholas Latifi 20th.

The @redbullracing duo power to the top 👊#AbuDhabiGP #F1 pic.twitter.com/llBruLjCgD

UPDATE: Hamilton was cleared from stewards with no penalty after they found that he slowed down enough when the red flag was waved despite being on a fast flag. They referred to the Verstappen incident from 2021.

“The Stewards heard from the driver of Car 44 (Lewis Hamilton) and the team representative. The Stewards reviewed positioning/marshalling system data, telemetry, team radio and in-car video. There is no dispute that Car 44 passed Car 20 directly after the track was placed in a Red Flag condition. The driver of Car 44 stated that he was on a fast lap, he saw the Red Light, immediately completely lifted the throttle and applied the brakes, whilst checking his mirrors for cars following in close proximity. He stated that he had, in doing so, gone past Car 20.

The Stewards took note of the precedent in relation to the 2021 Dutch Grand Prix (Max Verstappen), where no action was taken against the driver under similar but no identical circumstances. The telemetry evidence was sourced directly from the live data available to the FIA not from any evidence provided by the team. The telemetry data clearly shows the following;

1. That immediately when the red light was displayed, the driver lifted throttle 100%

2. That immediately when the red light was displayed, the driver applied firm braking pressure.

It is our conclusion that the driver of Car 44 took every reasonable action to comply with the regulations in that he immediately reduced speed in a safe manner at the earliest opportunity upon the first indication of the red light. Notwithstanding, technically this is still a breach of Art 2.5.4.1 b of Cpt IV of Appendix H of the International Sporting Code, however he could not avoid overtaking Car 20 in this case and therefore the Stewards DETERMINE to apply no penalty. It is noted the there was no breach of Article 37.6 of the Formula 1 Sporting Regulations,” explained the stewards. 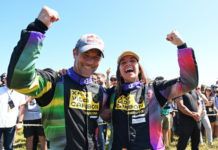