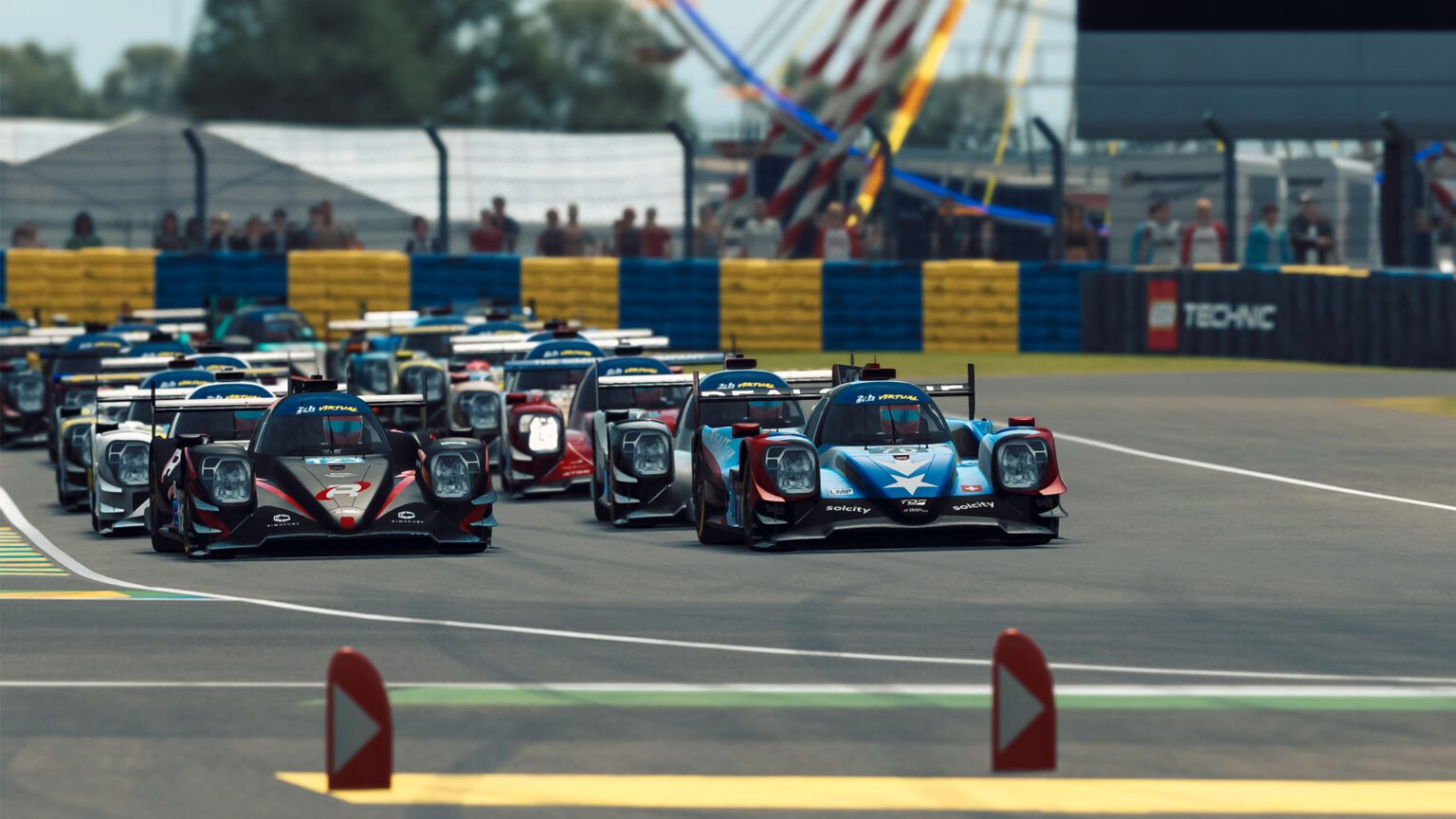 Max Verstappen’s run in 2022 Le Mans Virtual ended early after a crash when he was driving in lead but sister #70 Redline outfit secured the win.

The final round of Le Mans Virtual Series, with a $250,000 prize pool on the line, both class winners took their respective overall championship victories too. Formula 2 driver Drugovich in the #70 Realteam Hydrogen Redline led the 50-car and 200-driver field away at 2 pm CET on Saturday 15th January 2022.

During a fraught qualifying session the day before, his team-mate Rietveld snatched pole position, just two thousand of a second ahead of the #123 Team Redline entry driven by Max Verstappen. In GTE, it was Red Bull Racing Esports in the Corvette on pole position after a scintillating lap by Scuderia AlphaTauri F1 esports incumbent Sebastian Job.

Ahead of the race starting, there were six-minute pitlane penalties handed out to the GTE pole-sitting #111, the #56 Team Project 1 x BPM Porsche and the #5 Williams Esports LMP for not fielding the requisite number of ‘pro’ classified drivers. Sadly for the #31 W Series BMW GTE entry, it suffered from a hardware issue during the electric-hydrogen LMPH2G-led formation lap and retired before the start.

While Drugovich completed the first two corners of the race in the lead, heading the field was short-lived as Verstappen swept ahead heading into Tertre Rouge on the opening lap. From there he sought to build a lead, but from fourth on the grid, the #28 Veloce Esports entry driven by British GT race winner James Baldwin had risen to second in the open stages. He was hunting down the Formula 1 world champion.

That set the tone for the opening six hours, with Verstappen vs Baldwin, Redline vs Veloce. Further back in the pack, a big incident threatened to end the race prematurely for the championship-leading #4 Floyd ByKolles-Burst car as Franco Colapinto in the #31 Team WRT SIMTAG Esports speared across the grass and into the Tom Dillmann driven entry – but thankfully both were able to continue.

Mercedes-AMG Petronas was hoping for a successful return to Circuit de la Sarthe, but sadly for them Dani Juncadella mistimed a downshift, over-revved the engine and the team was out at the three-hour mark. Despair also befell Erhan Jajovski in the #8 R8G Esports Oreca – a star performer so far this season for Romain Grosjean’s eponymous team. After making contact with Marcell Csincsik in the #22 Williams Esports car down the Mulsanne Straight, Jajovksi ended up backwards in the wall, losing the rear wing and receiving a drivethrough penalty.

As the race entered the evening, the #123 Redline entry was now comfortably ahead following a metronomic stint by VCO ProSIM SERIES champion Maximilian Benecke. With over seven hours completed and Verstappen back behind the wheel again, he took an aggressive line over the kerbs at the Ford chicane. The result was a spin and heavy contact with the barriers, ripping off two wheels. Retirement beckoned for the erstwhile race leaders.

This promoted the #70 into a lead it never relinquished. Through the darkness, Formula E driver Rowland took to the helm from Rietveld, with Smidl controlling the race as dawn broke. There were times when Veloce Esports ran them close, former BTCC-driver Mike Epps putting on a rousing display against Smidl as the race approached the halfway distance, but ultimately the #28 car gradually slipped back, ceding second to the reigning champions – the #1 Rebellion GPX Esports car.

A drivethrough penalty for contact with another car in the pitlane on Sunday morning further dashed Veloce’s hopes, before running out of fuel with just under three hours on the clock to prematurely end the team’s race. The LMP class was filled with incidents, notably Juan Pablo Montoya removing his rear wing against a wall, before son Sebastian clipped the nose of the #77 GTE Porsche during the night, spinning into the tyre barrier and retirement.

Also withdrawing during the night was the #444 Alpha Ind. ByKolles-Burst – snap oversteer through Karting resulting in a heavy impact with the wall. Meanwhile, the #44 ARC Bratislava and #39 GRAFF by ProSimu entries fell by the wayside with mechanical maladies. The demise of WTCR race winner Attila Tassi in the #5 Williams Esports LMP happened at the Porsche curves during the evening, after spinning into the gravel and making contact with the #61 SEM9.Axle Porsche GTE of Alister Yoong, who was already off the road thanks to a separate incident just ahead.

A GAME OF CHESS IN GTE

The GTE category was no less intense. In the opening phase, 2021 British GT Champion Dennis Lind in the pole-sitting #111 Corvette gradually slipped behind the leading bunch. It was a Porsche Esports Team benefit for the opening hour, the #91 leading the sister entry #92. The #71 BMW Team Redline M8 was in third, ahead of the Ferrari Driver Academy 488 in fourth. It was this top four who would ultimately play a strategic game of cat and mouse for 24 hours.

The #71 BMW was seemingly able to extend its early stints by one lap over the Porsches, something it has been trying to do in each Series race so far. It took until seven hours complete before the relentless BMW, then in the hands of Siggy, took the lead from the IndyCar and NASCAR Xfinity driver Sage Karam.

The Porsches stayed close, however, and looked to have the quickest pace, if not the ideal strategy. Ferrari was not out of contention either, and through the night would trade podium places with the two Porsches depending on stint length. All four were closely matched, but BMW Team Redline was slowly, but surely, edging away.

Then disaster struck the #92 Porsche in the dead of night with just over 14 hours of the race left. With Tommy Østgaard behind the wheel, Nico Varrone in the #65 Panis Racing LMP swept around the nose of the Porsche at Karting and punted the GTE competitor into the barrier.

With heavy damage sustained, only one manufacturer-backed Porsche now remained in the race. They weren’t the only competitors in this class to encounter some hiccups, although it must be said that the GTE class showcased superlative driving standards in general.

Early on, the #56 Porsche driven by Britcar race winner Jimmy Broadbent was squeezed by FIA WEC driver Ben Barker in the #86 GR Wolves Racing 911 entering the second Mulsanne chicane. The two cars then collided twice again off the track. For their efforts, Barker received a drivethrough penalty for making contact at the corner entry, while Broadbent received one for contact off the track.

The #86 would retire with engine failure four hours later, the GR Wolves team racing live from the football team’s Molineux Stadium. Sadly for R8G Esports, its #15 LMP and #888 GTE entries collided at the Porsche Curves, putting the latter driven by French F4 driver Elliott Vayron heavily into the barriers, but thankfully not into retirement.

As the race headed towards the end, and with just over two hours left, the #77 Proton Competition Porsche started trading places with the Ferrari for third. Having plugged away all race, Kevin van Dooren diced on track with Ferrari GT factory racing driver Nicklas Nielsen. The pair went side-by-side through the second Mulsanne chicane, then through Indianapolis and again through Arnage. A lap later, while running alongside each other through Indianapolis once more, Nielsen slid into the barrier and was forced to pit for damage repairs. Proton was now clear in third.

A SHOWCASE FOR RACING ESPORTS

In the end, it was the Realteam Hydrogen Redline with drivers Drugovich, Rowland, Rietveld and Smidl who crossed the line first after 24 gruelling hours, taking a second victory of the series and overall championship laurels to boot. The #1 finished in second, one and a half minutes behind a second victory, while the #4 ended up third and a lap behind, just missing out of LMVS glory.

“This feels like redemption for last year, an amazing performance by the team in such an incredible event,” said Atze Kerkhof, director of Team Redline. “Now 2022 is starting really well like this. [In GTE] we pulled it off. We had a great strategy, perfect engineers and teamwork. Today, we were not the better car, but we pulled it off.”

In GTE, BMW Team Redline made it look easy from halfway onwards, with Siggy, Rudy van Buren, Lorenzo Colombo and Enzo Bonito sharing the spoils. In fact, the team recovered from a mid-race scare when van Buren’s sim equipment failed, resulting in a real-world three-hour drive to Siggy’s location in order to jump on his sim rig and complete the requisite race mileage.

“We are very happy [with the event]. When you put 116 simulators, representing the 50 cars, dispatching across 28 countries for 24 hours and connected to the same server without any technical failure during the long race, it’s very satisfying,” said Gérard Neveu, 24 Hours of Le Mans Virtual Executive Producer.