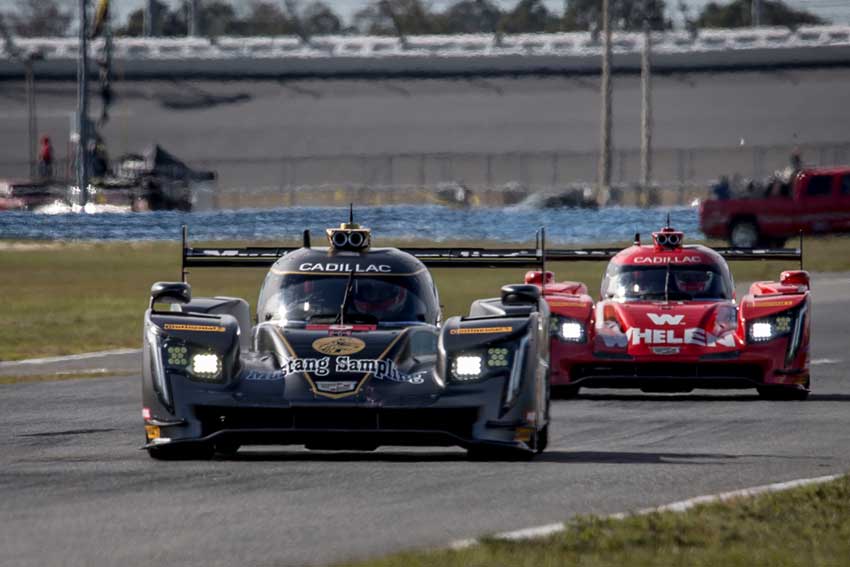 In Prototypes, Cadillac of Mustang Sampling Racing #5 comfortably leads the race after the first four hours. The Nissan #2 and the Cadillac #10 complete the podium area. GTLM leads for Ford #66 and GTD leads for Audi #29.

The 24h of Daytona have already completed the first four hours of the race with great expectation. All drivers have already made several changes of pilots, in addition to multiple pit stops. The race has stabilized and now the focus is on the endurance, on accumulating kilometers and laps without losing time.

For now, in the main category of Prototypes, it continues to lead the Cadillac #5. After driving Joao Barbosa for the better part of the last two hours, the turn has recently been for the Brazilian Christian Fittipaldi. In second place was the Nissan #2 with Ryan Dalziel at the wheel, and is located eight seconds behind the leadership of Fittipaldi. Four seconds behind comes the second Cadillac #10, with Jordan Taylor at this moment.

The Top 5 is completed at the end of these 4 hours by the two drivers of the Indycar Series, Graham Rahal in Acura #7 and Simon Pagenaud in Acura #6. The third Cadillac is #90, which with Edward Cheever has been relegated to sixth place, just in front of the two Ligier. The #32 is 18 seconds ahead of #23, which right now has the wheel to Lando Norris.

The second driver to jump on the track with Alonso‘s vehicle, Phil Hanson, was on the verge of making a serious mistake that could have condemned the race. At two and a half hours the first yellow flag of the day has come out, which has been caused by a double incident. The Multimatic #20 has made a spin that has sent it to the final of the classification and the Oreca #38 has had to return to box at low speed. All this, with Hanson as the only one who did not make the fourth stop, which could have sent him to the back of the grid. The change of strategy of the rest has saved the furniture to Fernando Alonso‘s team.

In GTLM he leads with great authority the Ford #66 that Dirk Mueller is currently driving. From the beginning of the race he has practically not released the lead, and he does it with 20 seconds gap on the Porsche #911. Chip Ganassi’s driver, Scott Dixon, is in third place in the category 26 seconds behind lead. The Corvette #3 has fallen to sixth place in the GTLM and is now with Mike Rockenfeller at the controls.

Finally, in GTD the news regarding Miquel Molina has completely changed. The Catalan started leading the race but after getting out of the car, luck has gotten worse for Ferrari #82. Problems in boxes have forced to spray the car with fire extinguishers and has caused a lot of time to be lost in the repair, falling to 19th place with 16 laps lost. The leader at the moment is the Audi #29 with Kelvin Van der Linde at the wheel. It is followed by seven seconds the Mercedes #33 and half a minute the Acura #93. Daniel Serra is back at the wheel of Ferrari #51, and as the best positioned of the Italian squad is in seventh place.