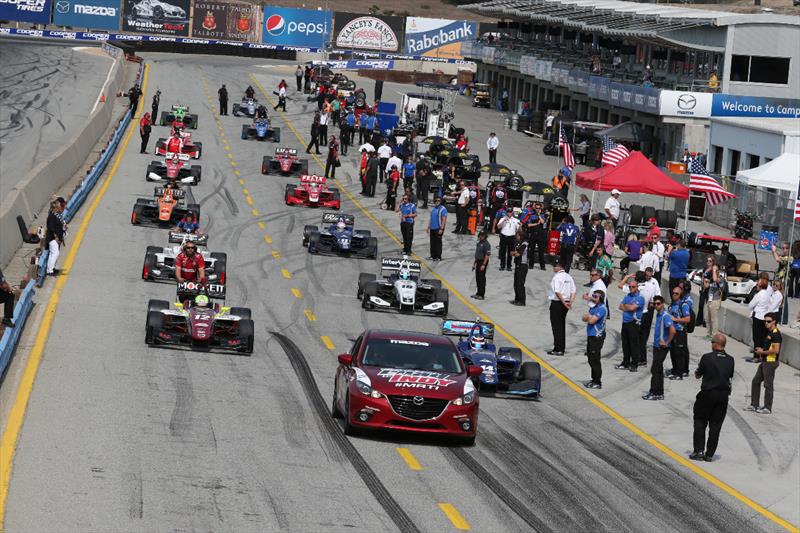 Andersen Promotions today unveiled the 2016 calendar for the series that comprise the highly acclaimed Mazda Road to Indy – Indy Lights Presented by Cooper Tires, the Pro Mazda Championship Presented by Cooper Tires and the Cooper Tires USF2000 Championship Powered by Mazda. All events will be in support of the Verizon IndyCar Series with the exception of the season finale which will once again take place at Mazda Raceway Laguna Seca. Seven venues will feature all three levels of the ladder system.

“I am extremely pleased with the caliber of events we have on our 2016 schedule,” said Dan Andersen, Owner and CEO of Andersen Promotions. “We have a total of 50 races on deck for the three series across key markets in the United States as well as Canada. Finishing the season – and crowning all three champions – at the Mazda Raceway Laguna Seca finale this year proved to be a great ending and we are excited to return and close out the season again next year.

“We have a lot of exciting things in the works. including the unveiling of the new USF2000 car at Indianapolis in May, and we will be working hard to build on the tremendous season we had in 2015.”

On the heels of a successful debut of the Mazda-powered Dallara IL-15, Indy Lights will see an expanded schedule of 18 races next season with the addition of three new circuits – Phoenix International Raceway, Road America and the Streets of Boston. The blend of three ovals, three street circuit and five road course events will include doubleheader rounds at all street and road course venues with the exception of the Boston race. A new qualifying feature – the Cooper Tires Lightning Round – will also debut at select circuits next year featuring the top three drivers from qualifying in a one-lap shootout on a new, softer compound Cooper RS3 racing slick for the coveted Cooper Tires Pole Award.

Indy Lights competitors will again vie for a guaranteed three-race scholarship to the Verizon IndyCar Series in 2017, which includes the Indianapolis 500. NBCSN will host one-hour broadcasts of all race events with live broadcasts on the IMS Radio Network to Sirius XM Satellite Radio, indycar.com, indycarradio.com and the INDYCAR App from Verizon. ESPN International holds the international broadcast rights with races airing in Canada, Colombia, Mexico and Australia amongst others.

RoadToIndy.TV and the Mazda Road to Indy App will continue to feature behind-the-scenes content, race recap episodes, special features, live streaming at select events and live shows of Mazda Road to Indy on and off-track activities.

Upcoming tests include the fifth annual Chris Griffis Memorial Test at the Circuit of The Americas (COTA) on November 21-22, Spring Training at Barber Motorsports Park on March 5, the Indianapolis Motor Speedway on May 11 (road course) and the Mid-Ohio Sports Car Course on June 7. Additional test dates, including a test day at the Indianapolis Motor Speedway oval, will be announced in the coming weeks.